Home » Boston’s Literary Community to Come Together at Book Festival 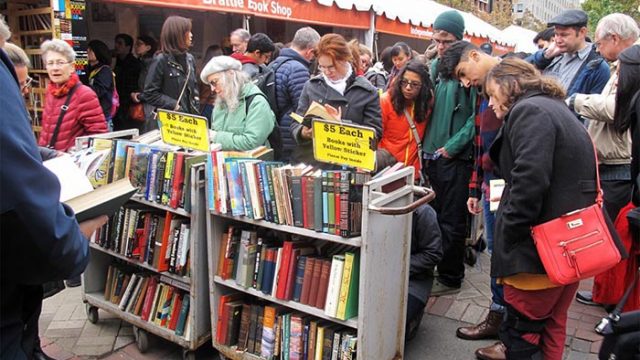 Boston’s Literary Community to Come Together at Book Festival

The eighth annual Boston Book Festival kicks off this weekend at a variety of venues around Copley Square, including the Boston Public Library. Beginning with a special presentation on Friday evening, this year’s festival continues through Saturday night, when over 200 presenters will take the stage to close the festival. Admission to the festival is free, and it’s open to the Boston public.

This year, the theme of the festival is “Life on the Margins,” and it will feature close to 90 different events and activities centered on the power that words have to inspire others. The Boston Book Festival is an opportunity to help transform reading into something more communal and shared.

“The festival is an opportunity to not only bring in world-class authors from around the world, but to showcase some of the great writing that is happening in Boston,” Piehl said.

The day’s events include individual speeches, panel presentations, and discussion workshops covering a wide variety of genres from literature and beyond. The festival will also feature an outdoor street fair with 75 vendors and exhibitors, including food trucks, on-demand poetry, walking tours, and live music in Copley Square.

Piehl attributes the success of the festival to the versatility of the location, as many of the events will take place in venues around Back Bay, including churches, cultural centers, and a hotel.

“Copley is one of the few areas in Boston where there is a great marriage of significant historic spaces which can be used for programming with an outdoor park area suitable for the street fair aspect,” Piehl said.

And after significant renovations, the Boston Public Library is ready for use. This year, the library will serve as the anchor point for the events, and Piehl hopes that it will be a great opportunity for members of the public to both see the new spaces and experience them in the context of the festival.

Kicking the festival off on Friday evening is “Storytelling for Page and Screen,” featuring Emma Donoghue—the author of bestselling Room, which was made into a movie—Maria Semple, and Tom Perrotta. The three authors—who have experience writing novels, films, and television shows—will be in conversation with Robin Young from Boston’s WBUR. The discussion will touch upon the differences between writing in different styles and for different purposes, while also engaging with what it was like to see their own work on the small or big screen. Just this past year, Donoghue was nominated for an Academy Award for best adapted screenplay for Room.

This year’s iction keynote speech will be given by award-winning writer Colson Whitehead and moderated by Saeed Jones, an American poet who was nominated for the 2014 National Book Critics Circle Award. Whitehead’s latest novel, The Underground Railroad, has already received widespread acclaim, and was just shortlisted for the National Book Award. Recently, Oprah Winfrey selected his book to re-boot her book club. Piehl described Whitehead as an author who was poised to have a big breakout book.

With the active sports culture at Boston College, “Sports in Context” is a session that may appeal to the BC audience. This sportswriting panel will examine the interplay between college and amateur sports and the social environment of the sports world. Sports Illustrated writer S.L. Price and former Yale basketball star Onaje Woodbine will explore street basketball in Boston and football in a former steel town in Pennsylvania, dissecting what these activities mean for each community.

This year’s festival will also feature a series of sessions called “Reading like a Writer,” which consist of three 20-minute conversations where an author digs into a small excerpt of his or her most recent work. This session aims to attract those interested in the mechanics of writing—such as the meticulous choices writers must make about punctuation or word choice.

This year’s Boston Book Festival offers lovers of literature the unique opportunity to come together and hear from the most acclaimed authors in the world. As it has in years past, this year’s festival will continue to foster a sense of community around active reading.