In just a few short weeks, Massachusetts voters will have to decide the direction of the state’s public school system. Appearing on the Nov. 8 ballot, Question 2 would allow the addition of 12 new charter schools or enrollment expansion in current charter schools each year. The rhetoric surrounding the debate up to this point has mostly centered on funding. Opponents of Question 2 argue that expanding the charter school system will weaken and divert funds from district schools. Proponents, recently bolstered by a Boston Globe breakdown of the fiscal facts, contend that per student spending is balanced between charter and district schools: in the 2016 fiscal year, approximately 3.9 percent of public school students attended charters and 3.9 percent of public school funding went to those charter schools.

But amid all this contention over the finances of the decision, I think many are overlooking the greatest resource potentially leaving district schools if Question 2 is approved: young, talented students.

It is perfectly understandable that parents want their children to attend the best fit, or simply the best school possible. It explains why the waiting list for charter schools is more than 33,000 names long. But if parents truly believe that leaving their district school is the only option to ensure their children’s success, I believe there is another path not raised often enough—Catholic or private schools. Perhaps this is because of the cost associated, and many parents have to focus just on the public and affordable options.

But I know many families who sacrificed greatly to make an investment in their children’s education and future. I know this because my family was one of them, and I remember well the constant stress my mother was under to balance her budget and ensure that she could afford my brother’s tuition and, later, my own. And I also know many families that couldn’t have sent their sons and daughters to Catholic or private schools without financial aid and generous scholarships. I also know this reality intimately, because it was my own. The cost of these schools can be daunting, and I feel most of the time they scare families away before they have even considered the option.

Private education is a major investment, and tuition has expanded seemingly right alongside the collegiate system. Tuitions at Catholic high schools across the state often approach $20,000. This sum is staggering, and I’m sure the number has the potential to put knots in a curious parent’s stomach. I find myself even worrying sometimes about whether I will be able to provide the same quality of education I received for my future children. But having seen the commitment of the financial aid offices at schools like Boston College High School and Fontbonne Academy, I can only say that I am heartened by their commitment to ensure that families from all walks of life have the opportunity to give their children premier educational experiences. I went to BC High with young men from very fortunate families, struggling families, and everything in between. It’s an environment that matures students at an accelerated rate not only because of the top-flight academic program, but the combined life experiences of many different socioeconomic and cultural backgrounds.

There are 33,000 people waiting to win the lottery of a charter school experience for their children. For some of them, no amount of hard work or sacrifice could make private tuition possible. And in these cases, I am reminded of how receiving financial aid at a private school can be quite a bit like winning the lottery itself. My education at BC High was very much like a winning lottery ticket. After my mother passed away, my chances of affording tuition were in jeopardy, but I received enough financial aid to make it possible. To this day I fondly remember scholarship breakfasts with my donor, whose generosity was my lottery ticket to a better education and a brighter life. I carry that lottery ticket with me every day because the education I received has formed the core part of my being. My donor’s spirit created such a strong loyalty in my own that someday it would be the ultimate honor to give another young man his own ticket to an education of a lifetime. I am not alone in this, and I know several classmates who hold a special place in their hearts for the donors who put them through school.

I encourage all the parents on that waiting list, and all the families who are wondering if their district or charter schools are the right fit for them, to take a look at Catholic schools like BC High and Fontbonne. The tuition can be daunting, even terrifying, and it will demand great sacrifices of most families. Making the tuition at these schools work often isn’t a case of cutting discretionary spending and sometimes takes real pain and hardship to work. The greatest labor of love I ever saw from my mother was the devotion she showed in putting my brother through BC High. But I can say with the most heartfelt conviction that this sacrifice is worthwhile, and that an education at these schools can change a young person’s life forever. Those young people are the ones who donate generously to their schools so that families who can’t sacrifice their way into affording tuition still have an opportunity to attend. And so the torch is carried through the generations by students grateful to their school and those who came before.

Question 2 will decide the direction of the Massachusetts public school system, but it won’t clear that waiting list and it won’t be a salve for the misgivings of many toward their district schools. I hope all these families remember there is a third and worthwhile option worth investigating.

charter schools bc high
The Problem of Shaming
Despite Theme of Silence, CJBC Re-Sparks Conversation 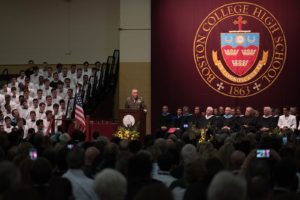