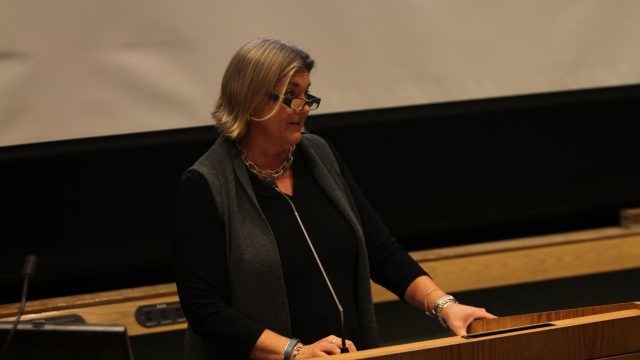 Politics probably seems pretty godawful to most people nowadays. College students preparing to cast their first presidential ballots are faced with the increasing negativity of mainstream politics and the constant bashing of almost all political figures. While listening to the incessant banter and the brain-melting talking points, it can be easy for students to decide to abandon the world of politics all together. For this reason, it is important that college students are presented with positive and constructive political role models.

This past Tuesday, Jane Swift, the first female governor of Massachusetts, spoke at Boston College about her experiences in the political world. Her career began when she took a job working for former state senator Peter Webber. When Webber decided against running for re-election, she ran for the seat and won, becoming the 13th woman to serve in the State Senate. After a failed run for Congress in 1996, she was made lieutenant governor under Governor Paul Celluci, who was later appointed ambassador to Canada, which meant that Swift was made governor. Her story shows the possibility of a political career and provides a constructive model for students who might otherwise be discouraged by the current state of politics. She also spoke about sexism in politics and how she was affected during her time as governor. This is an important aspect of her experience and her talk helps inform students of these problems, while also hopefully working to address them.

Swift’s talk, sponsored by the Undergraduate Government of Boston College (UGBC), continues a pattern of women in politics speaking on campus. Last year, Madeleine Albright came to speak about her time as secretary of state. She was brought to campus by the Council for Women of Boston College Colloquium, which has also worked to bring more female political leaders to campus as part of its Women in Washington series. This includes a recent talk by Donna Brazile, the Democratic National Committee interim chair, and Mary Matalin, a presidential advisor to Republicans such as Ronald Reagan and George W. Bush. These speakers help provide necessary female role models in politics and bring a positive aspect of the political experience to campus. While these speakers had differing experiences in politics, they are all able to demonstrate political opportunity to students in a time of exceptional political negativity.