Home » The Glove Cycle: Coming to Terms with Loss 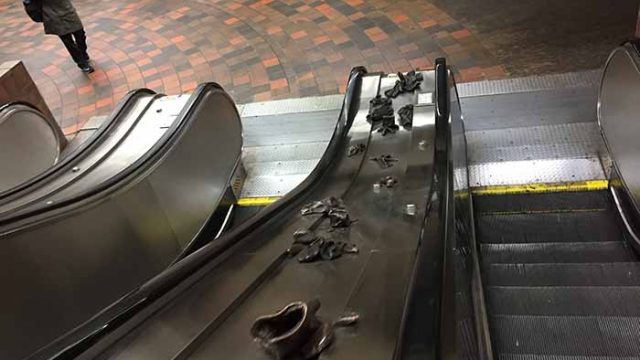 Over the past year I will admit to having lost two water bottles, a bracelet, a hat, a single earring, three necklaces, countless individual socks, a pencil case, and a tiny stapler. And the loss of each item completely shocked me. Especially the water bottles—losing those really shook me up.

When each item initially disappeared—except for those, like the necklaces, that I lost in a way that I could distinctly remember—I refused to accept that it was lost. I paced around the places I last remembered seeing it. Oftentimes I even asked complete strangers (a sometimes  daunting task) if they had seen my missing item. I would look at the world around me with eyes narrowed by suspicion, convinced that I would see some thief waltzing around with my dark green water bottle. Which, I guess, is crazy in retrospect. The people of this world are not out on mission to steal my water bottles and my hats. (Though, I do still think that someone stole my pencil case.)

Perhaps it seems strange to get so hung up on the loss of these items, especially when you consider the general lack of material or emotional value they actually held. I guess I just happen to really hate losing things. I hate the destabilizing sense that follows accepting the fact that I am unable to keep track of my own belongings. It must be linked to a fear of losing control, because each time I lose something I get the sensation that my life is subtly slipping out of my grasp.

Although this feeling is most certainly an overreaction, I can’t help it—try as I might—and so I make a conscious attempt to avoid losing anything at all costs—which is why the sculpture housed in the Porter Square T stop unsettled me the first time I stumbled across it.

When you descend into the stop, you will quickly notice the first glove at the top of the second escalator, the one that takes you completely underground and away from any natural source of light. At first, as you slowly move past the glove while the escalator moves downwards you might think that the glove is real—a lonely remnant of last winter.

But as you continue moving downward, clumps of gloves begin appearing in between the escalator railings in larger and larger numbers. Intrigued as to how this rash of lost gloves has occurred, you might reach out to poke one, and, upon feeling its cold surface, realize that the glove is made of bronze.

The gloves in question are part of Glove Cycle, the public art installation commissioned by the Massachusetts Bay Transit Authority and created by artist Mags Harries. Installed in 1984, Glove Cycle aims to build a sense of community and conversation between commuters within the station, and also to construct the narrative of a life cycle.

If commuters in the Porter Square T stop follow the trail of bronze gloves down through the platform toward the left, they will discover a small heap of these gloves, looking carelessly rumpled as though they were carefully thrown onto the tile floor. Covered with decades of dust and dirt, with only specks of bronze still shining through, the pile of gloves truly appears to be lost and forgotten in the rush of daily life.

As I stared at the gloves, I could not help but think about the list of things that I had lost over the past months. As much as losing something can honestly shake me to the core, maybe it is a feeling I need to get used to. Because maybe wrapped up in that fear of losing control is a deeper fear of letting go and changing—two things that are as impossible to avoid in the cycles of our lives as making it through a lifetime (or at least my existence) without misplacing a water bottle now and again.

But that being said: if you have my pencil case, I would really like it back.

cambridge porter square the glove cycle
The 1975 Wins the Year with Angst and Attitude in Bold Sophomore Album
What Would You Include If You Were A Tour Guide?