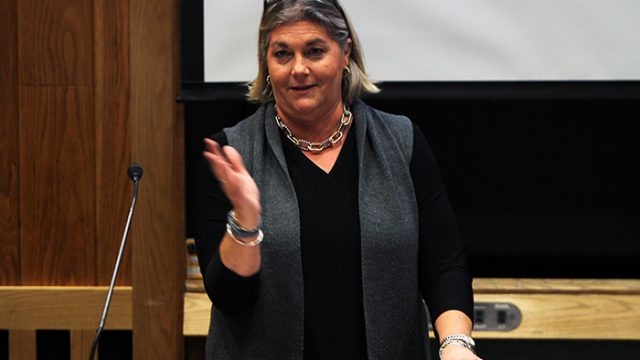 ‘Be Brave, Be Bold:’ Swift Advises Students Interested in Politics

Jane Swift, the first female governor of Massachusetts, spoke to a student audience this Tuesday in McGuinn Hall about her career in politics and the struggles she faced while in office.

Swift spent over a decade of her life in public service, serving as state senator for the Berkshire, Hampden, Hampshire, and Franklin districts of Massachusetts; secretary of Consumer affairs of Massachusetts; lieutenant governor; and governor. Currently, she is the CEO of Middlebury Interactive Languages, LLC, and serves on the boards of Suburban Propane, the School of Leadership in Afghanistan, Champlain College, and PBS Vermont.

Swift’s career in public office was set in motion just three years out of college, when she began working for former state senator Peter Webber.  As the 1990 election was approaching, Webber chose not to run for reelection and invited Swift to run for his seat. She recalled how, without Webber’s invitation, she probably would not have run for office.

Swift won her district’s seat and became the 13th woman to serve in the 40-member State Senate. She explained how being young and female, different from a majority of politicians, helped her get elected.

While Swift was serving in the Senate, she was seated next to seasoned state senator Michael Creedon, who helped to walk her through the rules of Massachusetts legislature and became a mentor to Swift. She said that he gave her valuable advice that changed the course of her political career.

“Do not become comfortable, and do not stay forever,” Swift said as she recalled advice from Creedon.

Taking his advice, after three terms as state senator, Swift decided to run for Congress in 1996.  She did not win the seat.

She recalled her first exposure to the sexism that is prevalent in politics and political media coverage. A majority of the focus, Swift said, was on her clothes, weight, and marital status. Although disheartening, losing the election allowed her to take the position of secretary of consumer affairs for Governor Paul Cellucci.

When Cellucci ran for reelection in 1999, Swift was chosen to be lieutenant governor. In 2001, Cellucci was appointed the ambassador to Canada, and Swift became the first female governor of Massachusetts.

“Be brave. Be bold. They can say the worst things about you, and you can still have a great life.”

During her term as governor, Swift faced difficulty and criticism because she was a woman and a working mother. She was the first woman to have children during her term. Swift recalls how some of her harshest critics were other women, and she explained how she often fell into the habit of criticizing her female peers.

“Our instinct is to judge women on their clothing choices, grooming, and hair, and that runs really deep,” Swift said.

While in office, she focused on improving public education in Massachusetts. She instituted the MCAS standardized tests and gave a state of education address to discuss Massachusetts’s educational progress. Swift recalled a Boston Herald story the next day that focused on how she re-wore the same suit but not on the content of her speech.

Frustrated with the way that her appearance was given more focus by the media than the policies and issues she believed in, Swift decided to try dressing differently, and began wearing a basic, white-collared shirt with a blazer. Suddenly, the focus moved from her appearance to the causes and policies she believed really mattered.

While in and after leaving office, Swift was criticized for using a helicopter to be flown home when one of her daughters was sick with pneumonia. She pointed out the double standard, saying that every governor has used a helicopter during his governance, but she was the only one scrutinized for it.

After Swift’s term was over, she chose not to run for reelection but instead to move to the private sector. After having dealt with the pressure of being one of the first women in office, she now feels the responsibility to call out sexism in politics when she sees it and to make her office one in which men and women are treated equally.

Swift ended her talk by taking a few questions. One audience member asked what Swift thinks we can do to close the gap between the perception of women and men in government. Swift replied by saying that she thinks more participation by women will bring change to the political atmosphere.

“Be brave,” Swift said. “Be bold. They can say the worst things about you, and you can still have a great life.”