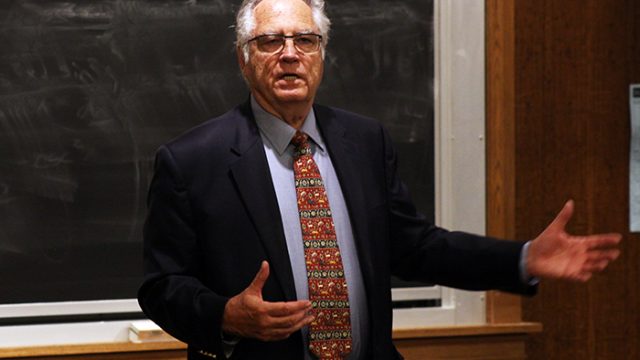 Gerhard Bowering, a professor of Islamic Studies at Yale University, hosted a lecture titled “Engaging Islam: Seeking the Face of God” on Wednesday night. The lecture was the second part of the Gasson Lecture Series.

The main topic of Bowering’s lecture was Islamic theology, specifically Sunni theology. Bowering began the talk by reciting a quotation from the Qur’an that inspired the lecture.

“Wherever you look, there is the face of God,” he said. “God has a face and no back.”

Bowering explained how God is omnipresent and no one can hide from God. God is also active in each and every moment, and Muslims depend on God in every moment of their lives.

Bowering then detailed God’s different attributes under Islamic belief. He first made a specific contrast between the form of God according to Christian theology and Islamic theology. Christians believe that God is made of three beings: the Father, the Son, and the Holy Spirit, but is also one person. Islamic theology states that God is strictly one person, and there are not multiple facets of His being.

Bowering then explained how although some believe that God is not of human form, the Qur’an specifically states that God has arms, eyes, and sits on his throne. Some interpret God using his “arms” to create the world and his “eyes” to judge people’s actions as a metaphor. Each word of the Qur’an, however, was spoken by God and is therefore true, according to Muslims. Bowering said that these words are meant to be taken literally.

He also discussed the relationship between predetermination and human will, or the ability to choose one’s own life path and receive punishment for those choices. Verses from the Qur’an support both views.

Some Muslims struggle to understand why people do evil things if God controls everything. Bowering’s solution to this question is that God’s way of being in control is allowing humans to have the ability to make decisions. It is the decisions people make that determine their afterlives. People who abide by God’s commandments will be awarded eternal life, according to Bowering.

Islamic theologians build their ideas on God’s attributes and teachings. Some individual Muslims, however, feel that Islamic theologians have created a gap between creature and creator, Bowering said. Some sects of Islam have trouble grappling that God is completely different than humans, as he is divine, even though they feel that they are one with God.

“This becoming one is rooted in our experiences with God,” Bowering said. “It is how creature and creative combine.”

Bowering ended the lecture by talking about Muslims’ responsibility to spread the word of God. It is their duty, as God always watches their decisions.

“There is nothing that happens without God being involved,” Bowering said.

2 COMMENTS ON THIS POST To “Engaging Islam: Yale Professor Talks God, Human Will”