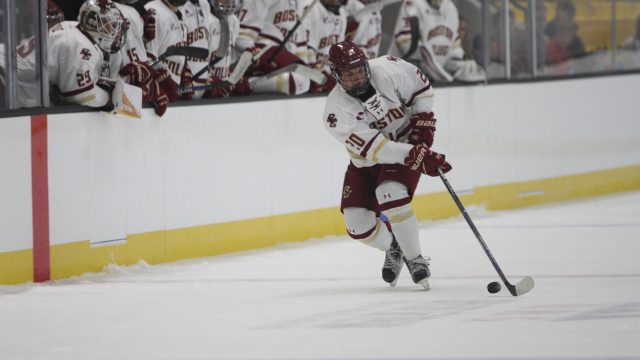 Midterm season may be coming to a close, but hockey season is just beginning on the Heights, with Boston College men’s hockey taking on the University of Wisconsin Friday night. The Eagles went into the game confident, but came up short in a 3-1 loss after going 0-for-6 on power plays.

Wisconsin (2-1-0) has had back-to-back losing seasons and is looking to rebuild with 20 underclassmen on its roster. The Badgers came out strong in the first period, winning the first two faceoffs. After a strong showing in Denver last week, BC (1-2-0) had a tough time finding its rhythm. The Eagles had a hard time controlling the puck as the Badgers laid on the pressure, forcing three turnovers in a row. The bad luck continued for BC, as Graham McPhee took the first penalty of the game for too many men on the ice, resulting in a Badger power play. Wisconsin won the faceoff and Grant Besse took a quick walk-in shot, the first goal of the game and his first of the season. With sloppy passes and miscommunication between the young BC players, the Eagles looked very unsettled and the first media timeout could not come fast enough.

Immediately following the timeout, the referees called two penalties—one on Besse for hooking, and the other on Matthew Gaudreau for embellishment—creating a 4-on-4. As soon as the game returned to full strength, Corbin McGuire checked JD Dudek into the boards and was called for checking, giving the Eagles their first power play of the night. Even with the advantage on the ice, BC couldn’t get past the Wisconsin defense to tie the score before the end of the first.

At the start of the second period, the Eagles won the faceoff. Early on, BC appeared calmer with the puck and had more controlled passing, but a risky play by Michael Kim resulting in a two-minute penalty would quickly turn the hopeful feeling around. The star of the second period was goaltender Joe Woll, who robbed Wisconsin of a point with an impressive save after a sloppy BC turnover right in front of the goal. The excitement didn’t hold when David Cotton (hooking) and Connor Moore (boarding) went to the box, giving the Badgers a 5-on-3 power play with 1:35 left in the period. It seemed that the Eagles might hold off Wisconsin, until Ryan Wagner took a successful shot off a rebound with 13 seconds left, giving the Badgers a 2-0 lead on the Eagles.

In the third period, BC’s offense continued to misfire, as the team failed to complete passes and continued to hit the puck into Wisconsin’s sticks. An early goal by Seamus Malone added to the tough time BC had throughout the night. Dudek, determined to make sure the game wasn’t a complete shutout, scored a goal immediately after winning the faceoff. With 38 seconds left in the game, the Eagles decided to pull Woll to increase the pressure on the Badgers. The added player on the ice wasn’t enough—it’s the first time BC has lost to Wisconsin in 10 years.

Bouncing pucks and frustrating misses added to the tough time the Eagles had in Madison, making the game a learning experience for the young team. Powerhouse players like Casey Fitzgerald, Ryan Fitzgerald, and Colin White have yet to score this season, and the Eagles are 0-for-16 on the power play through three games while finding themselves on the kill more often than Jerry York would like.

“The game has to be a stick-on-the-ice type of game.” York told reporters after the game. “The number of penalties with the stick just reaching—it’s something we have to teach as coaches.”

But it’s not even Halloween, and with such a young team, the Eagles still have the entire season ahead of them to live up to their preseason No. 5 ranking.