Home » Women’s Soccer Falls on the Road to Wake Forest 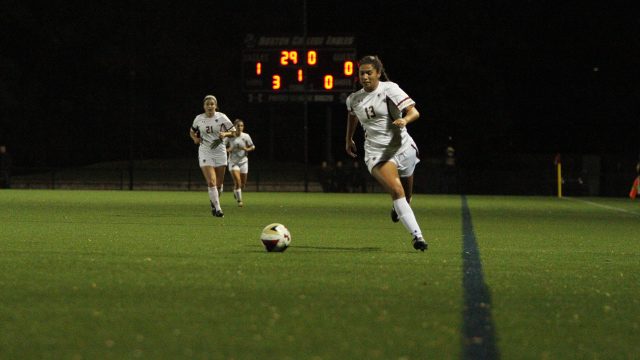 Women’s Soccer Falls on the Road to Wake Forest

Just a week and a half ago, No. 25 Boston College women’s soccer dealt then-No. 2 Florida State its first ACC loss of the season in a game that had potential to propel the Eagles into legitimate conference championship contention. But now, BC has lost its second-consecutive conference match, this time to a Wake Forest team that hadn’t won since Sept. 11. Saturday evening’s 2-0 match was the first time the Eagles (10-5-1, 2-5 Atlantic Coast) have been outshot since their 3-2 loss against Duke on Sept. 17. It also was the first time the Demon Deacons (9-6, 1-6) won an ACC game this fall.

This season, Wake Forest has repeatedly fallen short in conference play. The Demon Deacons had lost five out of their last six games, all by a goal. In the first half, it looked like Wake Forest was on pace to repeat this tragic performance. Shots, passes, and crosses were all landing just inches short.

In the 28th minute, Peyton Perea found Kendall Fischlein on the right side of the pitch. Fischlein crossed the ball into the 18, as Sarah Medina cut in for the header. But BC goalkeeper Alexis Bryant was quick enough to intercept the cross, colliding with Medina mid-air. For Medina, a possible goal turned into a yellow card, quieting the junior forward until the second half. Four minutes later, Bayley Feist turned to the middle of the box, giving her open space to fire away at the net. Feist slid into her shot, and the ball rolled wide right.

The half ended as a stalemate between the two sides. Though the Demon Deacons failed to score, they outshot the Eagles, 5-2. The Demon Deacons’ backline was stifling the 15th highest-scoring team in the nation (third in the ACC).

Nevertheless, the chances did come for the Eagles in the second half. Hayley Dowd stole the ball from Ally Haran in the 57th minute, creating a one-on-one showdown with Wake Forest goalie Lindsay Preston. The senior co-captain, searching for her 40th career goal, entered the box from the right side of the field. She shot left, but Preston countered, extending her leg to kick-save the shot. Then, in the 60th minute, Madison Kenny passed the ball to Dowd, who looked for fellow co-captain and ACC-leading scorer McKenzie Meehan. But the scoring duo’s exchange faltered, as Dowd’s pass was out of reach for Meehan, extinguishing the scoring opportunity.

As the clocked ticked down, the Demon Deacons’ pressure on the Eagles’ defense continued to increase. In the 67th minute, Perea headed a service ball, rattling the right side of the crossbar. Immediately, Caroline Wootten located the rebound, but misfired high. Although Bryant escaped, it was not long until her luck ran out.

Wake Forest’s Kahla Seymour dribbled down the right side of the field in the 78th minute, spotting Wootten sneaking past the BC backline. Seymour crossed the ball to the senior forward. Bryant, slow to react, was positioned on Seymour’s side of the field, leaving the net open for an easy Wootten goal. Seymour was credited with her second assist of the season, and Wootten earned her third goal.

The Eagles attempted to respond—just two minutes later, Jenna Bike played a nice ball into the middle of the 18, looking for Dowd. But Preston came out to make the save, before Dowd could even make contact. And soon, BC’s comeback was silenced.

Wootten forced a corner kick in the 83rd minute, on the left side of the Eagles’ defense. Maddie Huster took the corner, and connected with a leaping Reci Smith. The sophomore forward flicked the ball off of her forehead near post, extending the Wake Forest lead. The exchange gave Huster, the Demon Deacons’ leading point scorer, her fourth assist, and Smith her second goal of the year.

In desperation mode, Jenna Bike sent a cross into the box in the 87th minute. Despite a crowd of defenders, the ball reached Olivia Vaughn. But like everything else for BC during this match, Vaughn’s shot floundered, soaring over the crossbar.

The Eagles are now 1-4 in their past five games. A team that flourished in non-conference play, and whose potent offense carried over into ACC competition, failed to taint Wake Forest, the team at the cellar of the conference. With only three games remaining in the regular season, BC can no longer afford to lose if it wants anything to do with postseason play.