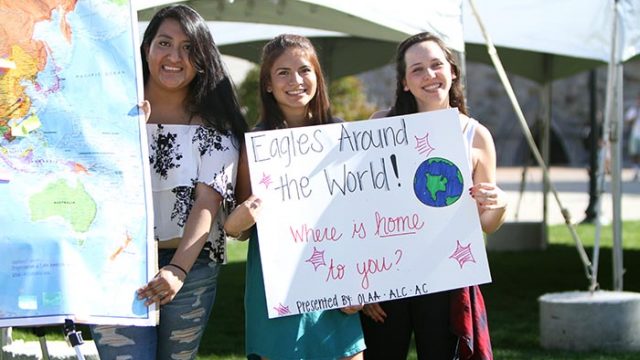 This year, the AHANA Leadership Council (ALC) teamed up with the Organization of Latin American Affairs and Asian Caucus to create a week of events for students during AHANA Acronym Week. The events of AHANA Acronym Week are centered around the theme of immigration and its effects on a BC student’s past, present, and future.

The AHANA acronym was coined in 1979 by two Boston College students. In an effort to celebrate the cultural differences at BC, Lewis-Mosley, BC ’79, and Alfred “Alfie” Feliciano, BC ’81 created the AHANA acronym. The acronym describes those of African, Hispanic, Asian, and Native American descent.

“The events were also planned in the hopes that non-AHANA students on campus would come out and listen to the experiences of their peers and gain perspective and insight into a way of life that may have been different or even surprisingly similar to their own,” said Kerrian Johnson, vice chair of ALC and, MCAS ’18,

AHANA Acronym Week began Monday with an event that featured a panel of students who talked about their experiences as immigrants or being the children of immigrants in the United States.

ALC hosted several other events, including a privilege walk, an interactive activity on Stokes Lawn titled “Eagles Around the World,” in which students put pins on a world map and discussed culture, and a community gathering held in the Thea Bowman AHANA Intercultural Center in which students had a forum where they could discuss their backgrounds.

On Wednesday at 6 p.m. there will be a viewing of Lou Montgomery: A Legacy Restored, a film about BC’s first black athlete. From 8 p.m. to 10 p.m., there will be a night market held in O’Neill Plaza to emphasize the special aspects of each culture and for students to be open about what they love about each other.

“I think the biggest thing is just showing respect, concern, and an element of care for fellow classmates, which heavily aligns with the Jesuit values that played a huge part in why most of us chose to attend BC and not other schools.”

On Monday, ALC will host its annual teddy bear initiative. The purpose of the event is to create an informal, comfortable atmosphere where students can talk about diversity while stuffing teddy bears. The event will take place at 6 p.m. in Eagle’s Nest. The final event of the week will be a closing ceremonial dinner on Wednesday at 7 p.m. in the Walsh Function Room. The dinner will feature performances by several groups, including BC Slam.

The purpose of ALC is to remind students of color that they are celebrated and remain an integral part of BC, Joon Park, ALC chief of staff and MCAS ’18, said. AHANA was coined to dispel the term “minority” and the negative connotation that it holds, Park said. The acronym serves as a term with which students of color can be proud to identify.

“Students who do not identify as AHANA should care/want to be a part of it because we are at this institution to learn—not just about history, English, science, and math, but also about the world and how it works, about our peers: their emotions and lived experiences,”Johnson said.

By embracing this week, AHANA students can show pride in their cultures, he said, and show fellow students of color that they are not alone in their experiences and feelings.

Next week, the ALC will host another event titled “Dress with Respect.” This event will educate BC students about how they can celebrate Halloween while still respecting different cultures. The ALC will be hosting Conscious Week in the spring, which will continue to encourage discussions about the AHANA community.

“I think the biggest thing is just showing respect, concern, and an element of care for fellow classmates, which heavily aligns with the Jesuit values that played a huge part in why most of us chose to attend BC and not other schools,” Johnson said.