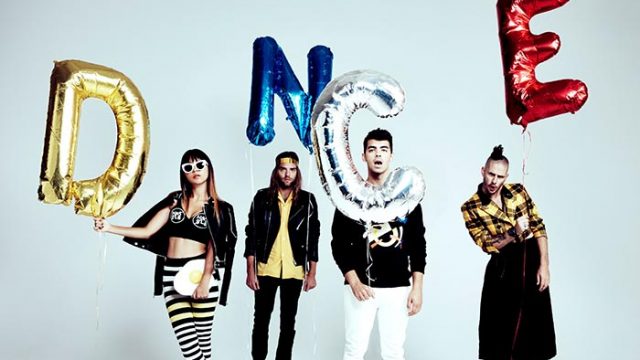 Watching pop-rock band DNCE’s recently released video for its single “Body Moves” feels like an invasion of privacy. The kaleidoscope of dimly lit, sexually charged scenes starring frontman Joe Jonas and bandmates Jack Lawless, Cole Whittle, and JinJoo Lee is intense and just scandalous enough to get away with.

Switching from home video settings, to black and white clips, to neon-filtered scenes, and back to the band performing in a dingy industrial landscape leaves the audience with a whirlwind of visual stimulation, but perhaps that’s the point. The wildly dynamic transitions have the potential to be too disorganized, but seem to create a unique fluidity that speaks to the song’s theme. As the artists sing about one-night stands and letting go of inhibitions, the video relays that message not only through the actual presentation of those scenes, but also through its inherent energy.

The hyperactive and aggressive mood of the video is only further proved through each band member’s experiences. As a shirtless Jonas films his midnight escapade with a leggy blonde on a home camera, Lee and Whittle each dance and grope those around them. The onslaught of suggestive content drives the song’s message home, but doesn’t fully connect with the track’s sound.

With all of the dark, sensual imagery, one would think the song would carry a more sultry tone. Instead, the song’s upbeat, pop sound clashes with its aesthetic, causing the video to be a little off-putting. DNCE’s effort to look cool and sexy, although successful, does not translate to what it is performing. This also isn’t the first time DNCE has played upon racy topics with a lighthearted tone. “Cake By the Ocean,” a euphemism for “sex on the beach” has the same risque undertone as “Body Moves.”

Although the song’s correlation with the video seems to fall flat, the video holds its own. Daringly sensual, it blurs the lines between flirty and inappropriate, but does so with a cinematographic skill and originality like none other.

dnce body moves cake by the ocean
Greenberg’s Last-Second Goal Carries UConn Past BC
Why So Serious? Trying to Maintain Your Inner Kid at College