Home » ‘I Found Myself as an Activist for My Country:’ Avera on Struggles of Ethiopian Jews 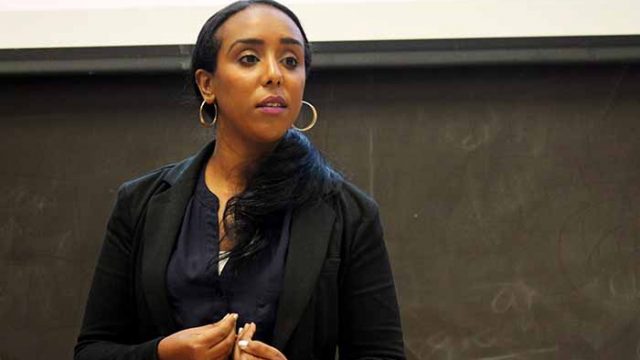 ‘I Found Myself as an Activist for My Country:’ Avera on Struggles of Ethiopian Jews

It was a peaceful day when 18-year-old Rebecca Avera witnessed a terror attack in front of her house in northern Israel. She watched as her childhood friend was killed in an explosion. Though she tried to help her friend, it was too late. This horrific experience was a pivotal moment in Avera’s life.

“This was the time that changed me as a person,” Avera said.

Avera is stationed in Las Vegas as an Israeli Emissary for the Jewish Federation of Las Vegas and the Israeli American Council of Las Vegas. She also serves as an Israel Fellow on the campus of the University of Nevada Las Vegas. This Monday, she spoke about the journey of Ethiopian Jews to Israel in an event hosted by Eagles for Israel. She told the story of her family’s journey to Israel from Ethiopia. She also spoke of their heritage and her experience growing up as an Ethiopian-Jewish woman turned activist.

Avera began by asking the audience a question.

“How many of you have met an Ethiopian Jew?” she asked.

Only two audience members raised their hands. Avera explained that the Ethiopian-Jewish community is a unique one that many are unaware of.

Avera’s father descended from the Ethiopian-Jewish community known as Beta Israel. Residents of his village in northern Ethiopia lived a simple life. They had no running water, television, or cars, and they slept on the ground. Her dad immigrated to Israel via Cyprus in 1979. When he arrived to Israel, there were very few Ethiopian Jews there. Her father settled down near Haifa, in northern Israel, and became a Hebrew teacher.

Avera’s mother’s path to Israel from Ethiopia was one of turbulence and violence. During the time, there was a war between Ethiopia and Eritrea, which fueled Ethiopian anti-Semitism. Thirty-five hundred Jews were killed by the government, including Avera’s uncle, her mother’s youngest brother.

“The government brought his shirt covered with blood to my grandma,” Avera said. “That’s how they knew he died.”

After her uncle was killed, Avera’s mother decided to flee the violence and immigrate to Israel. Her mom left her home in the middle of the night to begin the walk to Israel in secret.

“What does it mean to walk to Jerusalem?” she said. “They didn’t know anything. They never saw an airplane, they never had TV, they didn’t know the way. I kept asking my mom, how did you walk to the unknown?”

Avera’s mother walked during the night and slept during the day. Most of the people walking through the desert didn’t have shoes. Avera’s mother continued to walk for two months, until she became ill. Because there were no doctors, she had to be carried the rest of the way. She was unconscious for a week. Special forces flew her to Israel from Sudan. As soon as Avera’s mother reached Israel, she kissed the ground. She had finally arrived at the Holy Land.

“Today we have a National Memorial Day for those people who died,” Avera said.

Avera described her upbringing as an Ethiopian Jew in Israel. She was the only African kid in her class from first to 12th grade. She struggled with being different from the rest of the population.

“At one point I was embarrassed of my culture, because I tried to integrate,” she said. “But then when I was older, I felt that I knew more Ethiopians, and realized my culture is very important to me.”

Avera served in the Military Police Corps in the Israel Defense Forces at the age of 18, where she was stationed in the West Bank and worked at checkpoints to prevent terror attacks. She later studied at the Interdisciplinary Center Herzliya as a student of government diplomacy and strategy.

Avera has been involved in civil rights protest efforts in Israel, recognizing that discrimination is a worldwide issue. She continues to support the Ethiopian Jewish community.

“I want to see an Ethiopian president, an Ethiopian prime minister,” she said. “Nobody thought America would have a black president years ago, it can happen. I don’t think it should be related to race or color. It should be about how good you are at what you do.”

ONE COMMENT ON THIS POST To “‘I Found Myself as an Activist for My Country:’ Avera on Struggles of Ethiopian Jews”