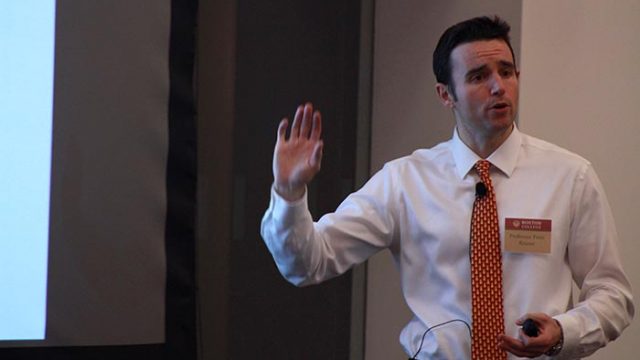 Before the third and final 2016 presidential debate, Peter Krause, a professor in the Boston College political science department, dissected the candidates’ policies, particularly on foreign involvement and terrorism.

The event on Wednesday night was a part of the Dean Series of BC, a series hosted by the BC Alumni Association that has run for the past five years.

Krause spoke about how to look at each candidate’s foreign policies, particularly when looking at the presidential debates. Krause talked about how the candidates’ ambiguity is intentional.

Ambiguity is key to gaining voters because it leaves issues up to interpretation. Voters who are already convinced feel assured, and voters who are unsure on policies can interpret the candidate’s ambiguity with optimism.

“Whichever candidate becomes president, he or she will become commander-in-chief of the United States, and that’s pretty important,” Krause said.

He began the talk by elaborating on each candidate’s grand strategy—a theory for how a nation causes security and prosperity for itself—and comparing the current candidates’ grand strategy to the last election.

“In a basic sense, there’s this major disagreement over ‘should we be deeply engaged in the world?’ or ‘should we be kind of more restrained from the world?,’ and there’s pluses and minuses in both senses,” he said.

Krause furthered the argument by dissecting some of the candidates’ sound bites and different debates and backed it up with research and precedence, establishing Clinton as believing in deep engagement, by reassuring allies and securing oil, and Trump as a believer in a sort of marriage between restraint and deep engagement.

“The key disagreement [between Trump and Clinton] is on whether to reveal the specifics of your plan,” said Krause.

“To defeat it as an ideology, it has to be scholars and experts in the Middle East who reject it. ISIS has made a mistake. By latching their ideology to the state, they made it easier to defeat.”

By dissecting certain discussions from previous debates, Krause determined that Trump is much more reticent to reveal plan specifics in order to avoid opponents using and defeating those plans. Clinton, as a Democrat, believes in more transparency and promotes public involvement.

When talking about the U.S. involvement in foreign affairs, the two candidates differ greatly in approach and how far to take that involvement. While Clinton leans toward a plan known as the Obama+ Strategy, Trump prefers a more aggressive method, promoting more torture and heavier restrictions on Islamic radicalism.

“Torture works, okay, folks? Waterboarding is fine, but it’s not nearly tough enough,” Trump said in answering a question on his stance toward torture and waterboarding.

Clinton rebutted Trump in a debate.

“We are not at war with Islam, and it’s a mistake to say that we are,” she said.

In terms of strategies, and how to defeat ISIS, Krause explained the complexity of the matter. He said that not all allies agree on how to defeat it.

“They have to think about the day after, as much as about the fighting on the ground,” Krause said about Sunni fighting and liberation in the Middle East.

After comparing the two candidates’ positions, Krause delved further into ISIS—why it’s still around, how to distinguish it from Islam, and how to approach it.

“ISIS thrives on polarization,” Krause said. “The reason they want this to happen is it comes down to how you fight an effective insurgency.”

By polarizing the different Muslim groups, ISIS can take over these pure areas more easily.

Krause welcomed questions from the audience. One audience member asked how to fight jihad because it is not an army, but an idea.

Krause said that jihad has reached the point at which it’s more than an idea, it’s a revolutionary movement.

“To defeat it as an ideology, it has to be scholars and experts in the Middle East who reject it,” he said. “ISIS has made a mistake. By latching their ideology to the state, they made it easier to defeat.” 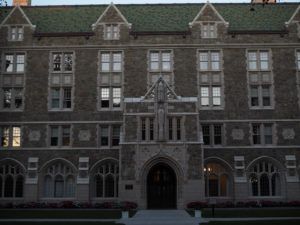