Home » The Future of the GOP 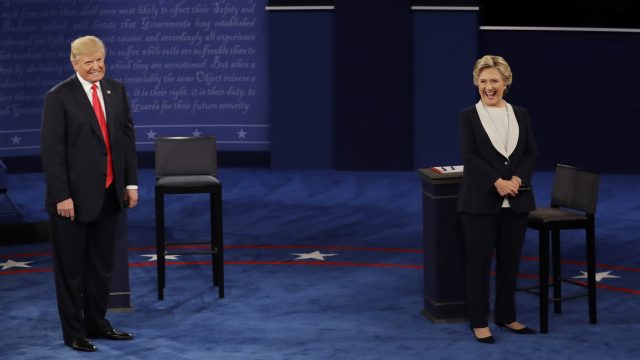 The Future of the GOP

Well, everyone, any news since my last column? Seriously, our politics have fallen into chaos so quickly, and there will be readers who will ask me if I take back any of what I wrote in “A Defense of Donald Trump.” I do not. I stand by my points in that piece and remain unapologetic.

It would be very easy for me to restate the case for Donald Trump even in light of the leaked audio, nasty language, and current accusations. Very easy. In fact, I made that case in a previous draft of this column. But where would that get us? The people who already hate Trump, who think all of us Trump-voters “deplorables” as a matter of course, will certainly not change their minds because of another column arguing the same thing as my last one. But I have already argued the case for the Defense, and there’s no need for me to reopen it. Rather, let us examine some of the major issues of this election that mean something to the future of the Republic—to wit, we’ve got bigger fish to fry.

Let me state first of all: Hillary Clinton’s chances of winning the presidency are looking exceptionally good. If you wanted that admission, you’ve got it. The people, Democrats and Republicans, who are declaring this election over, however, are going a bit too fast, in my opinion. It ain’t over till it’s over, and the result of this election may depend on the power of coalitions. Now, if I were gambling here, I would certainly place my bets on Clinton’s victory on Nov. 8. As overrated as I find their significance or relevance, one cannot deny that Trump’s recent scandals and comments have overshadowed a fine debate performance and sent him far behind in the polls, scrambling for support. Even more troubling, the Republican Party’s mass exodus away from Trump has left the candidate looking more like an independent than a partisan. Admittedly, Trump has never really been a partisan, but the point is that his campaign has become far more identifiably akin to an independent run—one thinks of Ross Perot or, before him, John Anderson—than to that of a Republican outsider like Barry Goldwater or Pat Buchanan. Still, to return to the gambling metaphor, we must remember that, as they say, crazier things do happen. I, for one, could have never predicted the British vote in favor of Brexit—unpredicted by any pollster or gambler—which was, as I’ve argued before, the greatest conservative victory since the fall of the Soviet Union. Let us not forget Taleb’s “black swan” theory: that wildly unexpected events, considered extreme outliers with no possibility of occurring, do happen, more often than we expect, that we can rarely predict them scientifically or statistically (e.g., with polls), and that we always tend to rationalize it after the fact but never before it (of course). None of this is to indicate that I think a Trump victory will, in fact, take place. As of this moment, I don’t—but let’s not have any foolish notions about this race’s already being over. The only poll that matters, remember, is Election Day.

Clinton’s wonderful luck in this election continued with the first “Wikileaks” release of campaign emails on the same day that The Washington Post broke that first audiotape with Trump and Billy Bush. Really, it is remarkably fortuitous for her, isn’t it? What astounds me is that the leaked material is receiving such limited news coverage. Clinton’s dealings with Wall Street and major corporations, the secret connections between her campaign and the news media, and nasty remarks by a top aide about Catholics. Yet people are fascinated by Trump and his peccadillos, and so the corruption of the Clinton campaign goes flying by. It’s not all that surprising—we cannot help being interested in the wild and the outlandish (and Trump is, more than anything, wild and outlandish)—but it shows how far we’ve fallen. Clinton’s strategy of parading the other candidate’s sins and thereby masking her own is marvelously effective, especially when Trump’s sins are ultimately less relevant to but more colorful in the election at hand. Who except the political guru is hearing about the leaked emails? Certainly not John Q. Voter, whose ears are inundated with, and probably sick of, breaking news about Trump’s past solecisms. Yet the former are probably more relevant to policy and action in the White House than the latter.

We are now being told, especially in light of Speaker of the House Paul Ryan and many other prominent Republicans’ move away from Trump because of the comments and the accusations, that the Republican Party is in shambles, ruined, will never win again, has no hope, will have to change or die, ad infinitum, ad nauseam. Now, I know it was before I was born, but I remember hearing in my studies similar claims about a political party’s future. Ah, yes, the 1972 presidential election, in which George McGovern’s landslide loss indicated to commentators that the Democratic Party was in shambles, ruined, would never win again, had no hope, would have to change or die—et cetera, et cetera. The Democrats, of course, won the presidency four years later. Sure, it’s possible that the Republican Party could split up, but I don’t think it’s going to happen—I don’t think so at all. Our two-party system, remember, is amazingly resilient, and whether Trump wins or not, I do not think either option will destroy that two-party system.

Rather, the Republican Party will exist as long as the conservative impulse exists in even a few of us—the impulse of love of family, neighbor, and country, of enterprise and ingenuity, of hard work and great achievement, of traditional virtue and respect for western civilization. For such do we hope. There are no lost causes, T.S. Eliot tells us, because there are no gained causes—we fight the same battles from age to age. I make no claims for clairvoyance, but I can say one thing: whatever happens on Nov. 8, boys and girls, the Republic will endure.

Starbucks, Soup Dumplings, and the Benefits of Switching It Up
Promoting BC Diversity