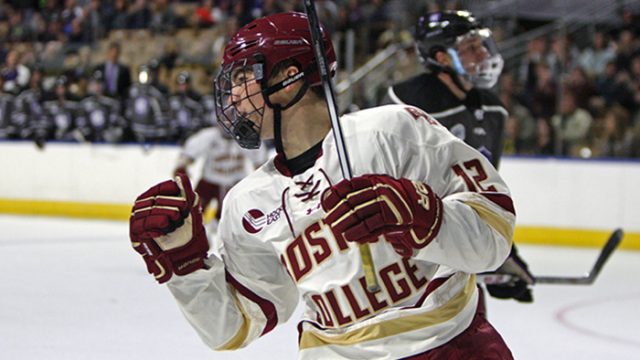 WORCESTER, Mass. — There’s just something about the DCU Center that excites Jerry York.

Nothing about it is particularly special. The stadium is just like all the others: drab, color-coordinated seats and some ice. The food isn’t great. And western Massachusetts is no one’s idea of a vacation destination. Normally it just means that Boston College men’s hockey has reached a regional. Worcester typically represents the first step to the Frozen Four, the annual goal of York’s club. Yet it’s only the sixth game of the season. So why does York love making the 45-minute drive from Chestnut Hill?

Because the Eagles just can’t stop winning there.

With a 6-1 domination of its new hosts—College of the Holy Cross—the Eagles improved to 15-1 all-time at Kelley Rink West. It’s one of the easiest locks in all of sports. And York knows it very well.

“Usually it’s later when we come,” York said. “We feel comfortable here, and we just enjoy playing at the DCU Center.”

The Eagles (4-2-0) toppled the Crusaders (2-1-1) today without the usual suspects, too. None of the team’s top three returning scorers—Colin White, Austin Cangelosi, and Ryan Fitzgerald—found the scoresheet. What’s more, the Eagles actually lost White for much of the game. The star center and Ottawa Senators first-round pick got shaken up on a collision and hurt his right shoulder. After the game, he had a bandage over his nose. As a precautionary measure, York pulled him from the game, especially with a midweek match against Merrimack coming up on Tuesday.

No matter for the Eagles, who suddenly have been showing a lot of depth. Five different players found the back of the net, including two for the first time in their careers.

Mike Booth got the party started with his first collegiate goal. The freshman from Carey, Ill. launched the puck top shelf after deking a couple of times in front of the net. His goal put BC up 1-0 at 14:33 in the first.

With time expiring in the opening frame, Casey Fitzgerald—BC’s highest-scoring blue liner from last year—doubled the lead. He tipped in a dribbling pass from Zach Walker to demoralize the Crusaders heading into the locker room.

Luke McInnis also got his first goal as an Eagle against the Crusaders. In the second, McInnis, the son of BC assistant coach Marty McInnis, showed the poise of a 15-year NHL veteran. He baited HC goaltender Paul Berrafato into coming closer to him by holding the puck in a wound-up formation at the left circle. When Berrafato bit, McInnis made him pay. Five minutes later, one of the team’s lone veterans, Matthew Gaudreau, tallied one of his own, tipping it in from Michael Kim.

The captain, Chris Calnan, added his first of the season on a power play early in the third. He tipped it in from the left of Berrafato on a pass from Graham McPhee. Fitzgerald put the icing on the cake with a perfect goal in stride on a no-look pass from Gaudreau behind the net. The strong play of Fitzgerald and Kim in particular, both offensively and defensively, thrilled the longtime coach of the Eagles.

“I think they’re coming up strong, and they have to,” York said of the importance of those two. “I’ve always thought that from the blue line back is how you have to build your club.”

Equally as splendid was the performance of Joe Woll in goal. The freshman netminder for the Eagles saved 25 of the 26 shots that came his way, the final goal coming only in garbage time. He expertly manned the crease, dashing back and forth as Holy Cross fired at him. Repeatedly, the Crusaders tried to challenge Woll’s glove side by coming up hard on the right before making a late pass to an expectant forward on his left. Every time, Woll stuffed them.

HIs most impressive sequence came with under two minutes to go. Woll faced two shots in under 10 seconds from the opposite side of the ice. The first, Woll lunged on his stomach to the left. The other, he perfectly deflected with his right shoulder. And, between him and Ryan Edquist, who shut down Colorado College on Friday, the Eagles are starting to forget Thatcher Demko. Well, maybe they haven’t gone that far yet, but Holy Cross certainly won’t forget about Woll any time soon.

“There’ll be some Crusaders shaking their heads about how some shots didn’t become goals,” York said with a laugh.

Despite the score, York was impressed with the play of Holy Cross, a program largely coming into its own. He thinks recruits should be enamored with Holy Cross’s combination of great academics, a lovely campus, and David Berard, a coach you want to play for. With Notre Dame leaving Hockey East after this season, York sees the Crusaders as the program to give the conference 12 teams again.

“If the fans keep coming, they have a chance to become a member of [Hockey East],” York said.

But don’t be fooled by York’s welcoming attitude. He just wants the Eagles to come back to the DCU Center more often.