Home » A General, an Ambassador, and a Reverend Walk Into a Panel on Just War 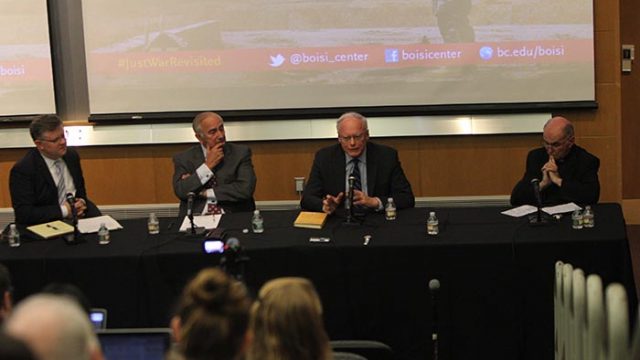 A General, an Ambassador, and a Reverend Walk Into a Panel on Just War

The theory of “just war”—a tradition of military ethics—has played a significant role in politics over the last century. On Thursday night, a discussion of the modern context of just war and its limitations took place in Higgins 300, sponsored by the Boisi Center for Religion and American Public Life.

The panelists at the event were retired Gen. James M. Dubik, senior fellow at the Institute for the Study of War and a professor at Georgetown University; Ambassador James F. Jeffrey, the Philip Solondz Distinguished Fellow at The Washington Institute for Near East Policy; and Rev. J. Bryan Hehir, a professor at Harvard University.

Dubik began the discussion by summarizing the findings of his recent book, Just War Reconsidered: Strategy, Ethics, and Theory. In the book, he establishes a distinction between the act of fighting a war and the process of waging a war. Dubik emphasized that this distinction is essential to understanding the application of just war theory to modern warfare.

“War is more than just fighting,” Dubik said. “A war has to be waged, not just fought.”

Dubik described the three necessary steps to waging a war. First, one must achieve sufficient coherency in war aims and strategies. Second, one must generate sufficient organizational capacity. And third, one must sustain legitimacy throughout the war.

He continued by arguing that the theory of just war should be reconsidered in how it relates to the strategic aspect of warfare, rather than just combat. He defined the action of waging war as a shared responsibility between the public and the government, and stressed the necessity of both perspectives in making moral decisions.

“It is 1,500 years old, viable, complicated, and fragile in the world in which we live, but it may be the best we’ve got for the present minute.”

Jeffrey provided a contrasting viewpoint on the function of just war in contemporary politics. He stated that while most people view World War II as a soundly moral conflict, the millions of lives lost and use of nuclear weapons might suggest the opposite. The focus of the American military shifted in response, he argued, to preventing a similarly catastrophic conflict from occurring again. This explains American intervention in the context of Vietnam, Kosovo, and South Korea, which Jeffrey believes to be justified.

As an advocate for American military intervention overseas, he found a problem in Dubik’s writing, predicting that his ideas would further complicate the process of going to war. He justified his concerns by connecting the Obama administration’s reluctance to intervene in Syria to the ongoing crisis within the country.

“My main problem is that if you make it harder to use military force, you will get the situation that you have in Syria today,” Jeffrey said.

Hehir provided the audience with a brief history of the development of just war theory. He described its transition from philosophy in the Middle Ages to its incorporation into international law in the 16th and 17th centuries. Although just war theory finds its basis in religious tradition, Hehir pointed out that it can be examined and applied outside of the context of religion, and is often used in society this way.

“People use it without reference to religious roots,” Hehir said. “It is public property. It is used in the military schools of senior service in this country, it’s used in academic life by political scientists and strategists, and it’s used in the public arena of politics, law, and military policy.”

He recounted the decline of the use of just war theory in the first half of the 20th century, citing the lack of humanitarian concern in WWI and WWII. He specifically took issue with the “obliteration bombing” that took place on all sides during WWII, which in his view should have been met with greater protest and concern. Such examples of unrestrained warfare indicate the necessity of just war theory, Hehir argued.

Towards the end of his talk, he spoke on the activity of peacebuilding and preventative diplomacy, connecting these facets of modern politics to the realm of just warfare. Although imperfect, Hehir stressed that just war theory still remains an indispensable institution of world affairs.

“It is 1,500 years old, viable, complicated, and fragile in the world in which we live, but it may be the best we’ve got for the present minute,” he said. 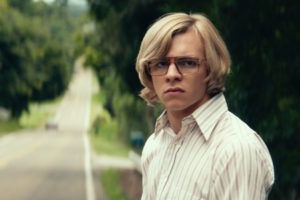