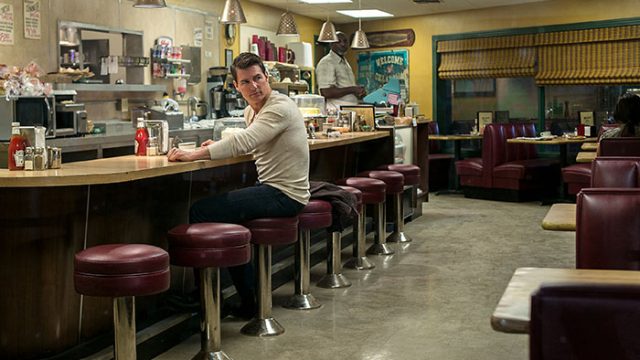 Four years after the events of Jack Reacher, the personification of action clichés: Jack Reacher, must fight against a corrupt military, shadowy arms dealers, and one angsty teenager to save the day. One thing is for certain, this is a movie that audiences will never want to see again.

Jack Reacher: Never Go Back is the second installment in the film series based on the Jack Reacher books by Lee Child. This movie is directed by Edward Zwick, a director known for movies like Glory, The Last Samurai, and, notably, not the first Jack Reacher movie. The change in directing style and unfortunate drop in quality between the two films is almost immediately apparent.

The movie starts off strong with its first scene. Reacher (Tom Cruise) is sitting at a diner while four men lie beaten on the ground outside, presumably due to a few quick punches by our action star before the movie began. Two police officers arrive on scene to bring him in. While placing him under arrest, Reacher calmly predicts that first the phone at the edge of the shot will ring and second, that the officer arresting him will be wearing the handcuffs. After sharing an incredulous laugh, the two officers start to handcuff Reacher. Then, the phone rings and his predictions come true. While this scene is certainly cheesy, it is enjoyable and feels very similar to the tone of the first movie, in which Reacher operates at almost superhero levels. The movie quickly slides downhill from here, however. Reacher is shown developing a telephone relationship with Army Maj. Turner (Cobie Smulders) until arriving at her office to the news that she has been charged with espionage and placed under arrest. Reacher must break her out and clear her name and his own, all while avoiding the military police officer Maj. Espin (Aldis Hodge) and the trained killer known as The Hunter (Patrick Heusinger).

And more than that, the movie also has too many different plot arcs with different characters that are all edited together like puzzle pieces that don’t quite fit.

There are times when the movie cuts to people who haven’t been seen for 30 minutes and expects the audience to remember and care about what is going on with them. The film is cluttered with a constantly rotating cast of side characters who serve no other purpose than to move Reacher from one action set piece to the next. Shoehorned into this mess is a character who is apparently supposed to ground or humanize the unstoppable action god that is Reacher and make the audience sympathetic to his character. This character is his maybe-daughter, a teenager named Samantha (Danika Yarosh). She, to the dismay of the film’s writers, quickly becomes tiresome. Samantha is annoying, unrelatable, a caricature of a 15-year-old girl, and on top of everything, a liability to Reacher and Maj. Turner. Her actions make very little sense outside of the “she’s a rebellious teenager who won’t listen to authority figures” trope. She constantly gets herself and everyone around her into trouble.

Even with numerous action scenes, the movie quickly becomes boring, feeling twice as long as its near two-hour runtime. The antagonists in the movie are some of the most generic bad guys in film in the last decade. They all drive black SUVs, wear black trench coats with black sunglasses, and, when they’re important enough to have lines, speak with horrendous accents. The movie doesn’t try to make the audience care or understand who these people are or why they are doing such awful things besides giving viewers a few throwaway lines of bad dialogue. The movie then ends in the same way as most every other generic action movie—everything has been perfectly resolved.

Jack Reacher: Never Go Back offers nothing new. Cruise and the rest of the cast seem to only be on screen for an easy paycheck. The movie is bland and forgettable, which is unfortunate, as it could have been a continuation of another perfectly fine, if unoriginal, action series.

jack reacher
Out of ‘Westworld,’ Out of Wonderland, Out of the Cave
A Night of Irish Poetry, Song, and Dance from Len Graham and Brian Ó hAirt