Home » We Need Women in the Workforce 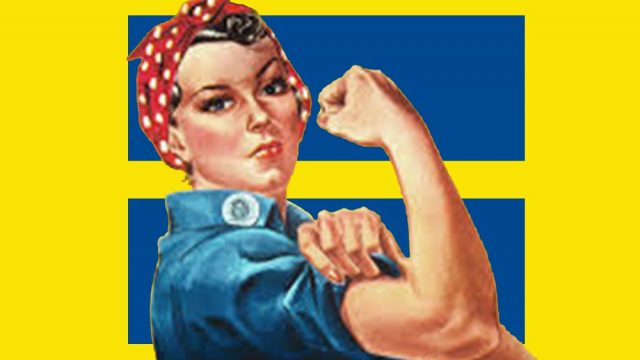 We Need Women in the Workforce

Amid my midterm-induced, sleep-deprived reverie, I was awakened by a strange conversation taking shape in one of my classes. Out of a dark, caffeine-saturated cloud emerged my inquisitive spirit, prodding me to listen to the words materializing around me, and to the nervous laughter and incredulous looks appearing on the faces of my classmates. They’d been talking about Tocqueville. Yes, then I remembered, something to do with Tocqueville’s impression of American women—exceptionally independent and highly educated as girls, but alas extremely subordinated after accepting their place in the domestic sphere after marriage. But there was something I’d missed. The situation had escalated quickly. So quickly, in fact, that one bold student was now posing the question—through a series of persistent queries and counterarguments directed at stunned classmates—would society be better off if women had never entered the workforce?

Once I registered what was happening, the black fog around my brain quickly dissipated as my indignation rose. The first assertion was that women had lowered national wages. The second, that women are inherently more emotional and less rational than men, and therefore better suited to stay at home with the kids, in a world where such division of labor is necessary. To an extent, I even admired the kid for so persistently pursuing an argument so blatantly unpopular in the collegiate setting. But on the other hand, I was deeply annoyed. According to this line of thinking, the entry of women into the workplace has led to the deterioration of the family, population decline, higher crime rates, and less civic and social involvement.

In an attempt to control my womanly emotions and pursue the argument rationally, I decided I would do a little research on my own. For the sake of time, let us address the question of whether the number of women in the workforce, rising mostly after World War II and growing extremely rapidly ever since, has lowered wages overall. This is a complicated economic question that involves the consideration of many variables, and I am by no means an economist, but the reason I was so peeved was mainly that I had not been provided any substantial evidence pointing to a correlation between the entry of women into the workforce and decreased wages.

If the argument is just that increased competition for jobs decreases wages, then that doesn’t necessarily mean women should be the ones to leave the competition. In fact, findings have shown that women on average perform better than men not only in school, but also in the workplace. According to these reports, girls tend to focus more in school, receiving substantially higher grades on average in all subjects, and are as of last year more likely to have higher education degrees than men, according to the U.S. Census Bureau. A recent study published by the American Psychological Association found that girls have received higher grades than boys in every subject for nearly a century. A study released by the Ponemon Institute found than women work harder and longer than men. The entry of women into the workforce has also tended to increase the GDP of countries and expanded sectors of economic growth. According to an Economist article, “Goldman Sachs calculates that, leaving all other things equal, increasing women’s participation in the labour market to male levels will boost GDP by 21% in Italy, 19% in Spain, 16% in Japan, 9% in America, France and Germany, and 8% in Britain.”

Though I am a bit skeptical of such optimistic reports, which are fraught with so many overlapping technical and causative considerations, the plethora of research on the subject shows that the entry of women into the workforce has not had negative effects on economic productivity.

I thought it would be fun in class to take the opposite side of my classmate’s argument and assume that women really are better workers—which is plausible, since they’ve been proven to be better students. So I asked my class whether, assuming this rationale is true, and accepting the fact that parents do need to partake in domestic and child-rearing responsibilities, would it not be more rational for men to increasingly insert themselves into the domestic sphere? No more nervous laughter from the class. Just silence. I don’t doubt that negative effects can arise when both parents work full-time jobs, but that’s still no reason to assume that domestic responsibilities can’t and shouldn’t be shared between a man and a woman. Viewed from this angle, it was easier to see that the logic is flawed and that individual considerations are more important than gender generalizations. I asked this mainly to amuse myself, because overall I think the individual is the most important factor, and that men and women aren’t really as different as some societies would have us think. The way my classmates reacted to the idea of men at home and women at work should be the same way people react to the opposite idea.

A Dumbed-Down Democracy
Unblinking: Staring Down This Election