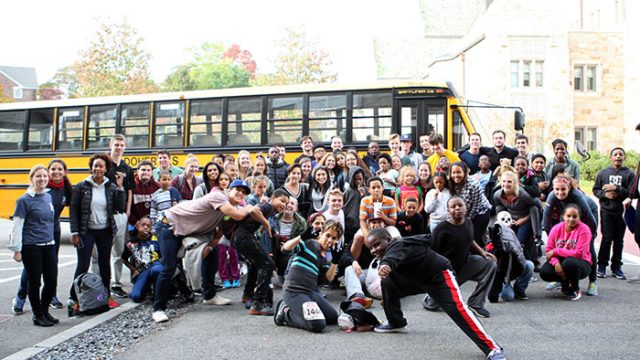 With BC Bigs, Students Form Meaningful Relationships With Local Youth

The area around McElroy Commons on a Saturday afternoon in autumn, just as the leaves begin to change hues, is a familiar and relaxing scene at Boston College. The beautiful scenery is spotted with students walking to get food, talking, and calmly going about their days. Just as a peaceful Christmas morning is contrasted by the tangible excitement of children running down the stairs, these easygoing Saturdays at BC are occasionally juxtaposed with a swarm of ecstatic youth rushing off the bus and leaping into the arms of their beloved BC Bigs mentors.

The Big Brothers Big Sisters of Massachusetts Bay (BBBSMB/BB) and the Big Sister Association of Great Boston (BSA/BS) focus on connecting disadvantaged children with mentors as a way of providing these children with guidance, stability, positive role models, and ideally a brighter perspective for the future. BB/BS cultivates positive relationships by having match specialists pair a mentor, a big, with a mentee, a little. The match is made based on both partners’ personalities to ensure there is a good fit between bigs and their littles. The extension of this program, BC Bigs, serves as a connection between BB/BS, and incorporates the values of BC into the goals of BB/BS.

“[BC Bigs] is unique,” said Katie Sullivan, BC Bigs’s new program director. “We are partnering with existing organizations who have a different perspective and a long history of doing this kind of work.”

The mentor relationship in this program is founded in and modeled around cultivating what BB/BS call the “six C’s” of child development, Sullivan explained.

These six traits–caring, character, confidence, connection, competence, and curiosity–are the values which BC Bigs aims to instill these in the children from a young age through its two programs. The program aims to assist them in growing into successful adults, and to ensure the children gain as much as possible from their experience in the program.

“The overall mission is to get BC students matched with kids in the Boston area and to build a strong relationship that goes both ways,” Nicole Panza, BC Bigs’s graduate assistant, said.

The first of the two programs BC Bigs organizes is a school-based program, in which bigs take weekly walks or trips on public transport to spend time with their littles, either during recess or after school. There are currently six schools and one community center involved, with another in the pipeline to be incorporated soon. The school-based programs are built off of bigs’ core values and centered around one-on-one interactions between bigs and their littles.

The other program run by BC Bigs is the Franklin Field program, which transports littles from the Franklin Field housing development to BC for bi-weekly Saturday afternoons of activities. The first hour of this program involves a large group activity, which could be anything from scavenger hunts to talent shows, followed by one-on-one time between the bigs and littles.

In both programs, it’s the one-on-one time that allows the unique relationship between a big and a little to be formed, and the activities that take place are just as varied as the personalities of the littles.

In the school-based programs, some matches enjoy playing sports and games outside, while others take it inside for arts and crafts. In the Franklin Field program, some prefer to shoot baskets or take a swim at the Plex, others prefer to get out and explore the campus, while some are happiest having a long lunch while talking with their big. No matter the activity, however, there is always plenty of fun to be had and an abundance of conversation.

Emily Rodrigue, a group leader and MCAS ’17, noted that because many bigs are matched for the entirety of their time at BC, the relationships develop over multiple years, which makes them particularly impactful. Similarly, bigs feel that the ability to be an influential role model–particularly in the lives of children who need them–is perhaps the most powerful aspect of being involved in this program. Maxwell Oldshein, a group leader alongside Rodrigue and MCAS ’17, repeatedly mentioned how being a part of the program changes not only the lives of the littles, but those of the bigs too.

“You don’t realize how much of an impact [the littles] can have on you,” said Oldshein, reflecting on his time in the program. “They put your life into perspective, and you can see just how lucky you are.”

Meaningful relationships like these, however, are not formed simply overnight. Rodrigue mentioned that in the beginning there are mostly “surface- level” conversations, as communication in the early period doesn’t always flow easily. In fact, several bigs have cited some struggles in the beginning of their relationships.

“At first she was shy, and wouldn’t open up about anything going on, so that was definitely a challenge,” said Victoria Perron, a BC Bigs veteran and MCAS ’17. Perron also mentioned that it can be difficult to find things the two can both relate to, as the littles lives can seem very different compared to those of the bigs.

Yet over time, as both the big and the little get to know each other, and with a little perseverance from both parties, the relationships form into something more comfortable and more capable of evincing change and personal development.

“All of the things we say that volunteering does … not only is it helping the place you’re volunteering, but it’s helping you as a person develop,” Sullivan said. “All of that is magnified when you have a personal relationship with somebody.”

The BC Bigs staff is hoping to improve the program is by creating a deeper sense of community. It’s making efforts to allow the Bigs to connect more with each other on campus, and the program is also trying to increase the impact of  family groups, which are weekly reflection meetings for bigs held by group leaders.

BC Bigs is also in the process of adding more Catholic schools to the program, in an effort to further align the campus organization with the Jesuit values of the University.

While BC Bigs has definitively created a positive impact in its five years of existence, it is not content to remain stagnant. This year alone has seen the addition of a full-time staff for the first time in program history, the addition of more matches in both programs, and the incorporation of more schools. It is clear that program-wide growth is underway.

bc bigs
More Than Sound, The Timeless Beauty of Vinyl Records
Brain Games: Inside the BC Psychology Department