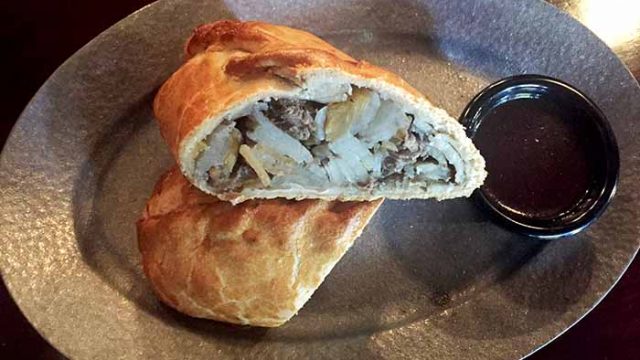 For many Americans, pie means only one thing: dessert.

Be it apple, pumpkin, chocolate, or banana, Americans tend to love these sugar-filled masterpieces so much that they forget that just across the ocean lies the pie’s meat-filled cousin, the pasty.

Thankfully, Cornish Pasty Co., one of the newest additions to the Back Bay restaurant scene, has arrived to remind Bostonians of just that.

With the original Tempe, Ariz., location opened by the Cornwall native Dean Thomas in 2005, the Cornish Pasty Co.’s immediate success allowed for the opening of three more locations across Arizona and Nevada—each individually owned by someone passionate about pasties and his or her work for the company.

When Brandon Volkenant, an employee of the original Cornish Pasty Co. for almost a decade, came to Boston for the first time in order to visit his wife’s family, he fell in love with the city.

Seeing the potential success in the area, Volkenant became eager to bring the Cornish Pasty Co. concept to the East Coast and start a family branch in the city.

After searching for the perfect location, and finally finding it last April, Volkenant began the process of renovating the storefront and getting permits—a process that, although challenging, slowly but surely resulted in the restaurant’s coming together and opening to a warm community reception.

“[The first couple weeks] have been very receptive,” Volkenant said. “I have had a lot of neighbors come in and tell their neighbors and everything; we’ve filled up the first few nights, and given that we’re on a skeleton crew [it was a little hard], but that’s a good problem to have … I got to meet a lot of locals in the area, and a lot of people have been coming in and spreading the word.”

And with Cornish Pasty Co.’s focus on such a unique menu item, the community certainly has a lot to talk about.

Volkenant explained that traditionally, the Cornish pasty is a miner’s pie—an option that was easy to pack with protein and carry down into the mines to sustain miners during a hard day’s work.

These large, hand-held pies—generally filled with meat and potatoes left over from the night before—were closed up with a large crimp of crust that served as a handle to allow miners to eat their pasty without having to leave the mine to wash their hands.

As the Cornish miners moved to Michigan and other parts of the United States, they brought their pasties with them, and the food item became a cultural staple of the mining community.

Although the pasties served at Cornish Pasty Co. have been slightly modernized—the large, handle-like crimp has become more of a decorative braided biscuit on top of the pie, for example—they are still made from scratch and are in constant production throughout the day. Some of the most popular menu items—all of which are affordably priced in order to appeal to the student population, as well as to the larger Boston community—include the Bangers and Mash pasty, which is filled with cheese and handmade pork sausage.

Volkenant also highlighted the popularity of the Lamb Vindaloo pasty and the Cajun Chicken pasty, both of which stray from the traditional flavors of Cornish cuisine.

“There’s a little something for everyone,” Volkenant said.

But it’s the traditional Oggie pasty that provides the perfect introduction to what a Cornish pasty is at heart.

Filled with layered chunks of steak and thinly sliced potatoes, and served alongside decadent red wine gravy, the Oggie is most in line with what defines a traditional Cornish pasty.

The crust remains thin and crispy while securely containing the peppery pot-roastesque filling.

Each bite is rich and buttery, and the flavorful and comforting filling is in perfect proportion to the crust that surrounds it.

But even this traditional pasty is anything but simple, and that complexity is part of what Volkenant values about the Cornish pasty.

Volkenant explained his love for the laborious pasty making process, which takes time and careful attention.

After carefully prepping all of the ingredients and measuring each one out to the gram, pasty makers arrange the fillings on the crust. Cooks then crimp and seal the pasties before placing them into the oven, where they are quickly baked before being brought straight to the customer’s table.

Volkenant emphasized the unique opportunity that diners have to eat a pasty baked from top to bottom—with each component made completely from scratch—on site.

But despite the detail required to construct each pasty, they only take about 10 minutes to make after a customer orders, as much of the prep work is done ahead of time.

And when they arrive at the table, the comforting smell of the freshly baked dough is unforgettable and is already creating the community following around the Cornish Pasty Co. that Volkenant has hoped for.

Since Cornish Pasty Co. Boston is an independently-owned family shop, Volkenant explaind that they have worked to fill the restaurant with a friendly neighborhood vibe.

“[Many] places … have a certain dress code, or a certain demeanor requirement and everything, but we try to keep it professional casual,” Volkenant said. “So for alternative lifestyle individuals—it’s okay if they have tattoos or crazy hair or something along those lines—[this is] a spot for people to express their individuality.”