Home » Despite Journalistic Inconsitancies, ‘Vice News Tonight’ Is Not Without Virtue 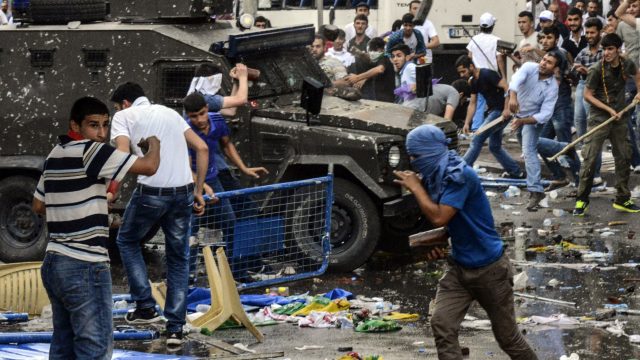 Despite Journalistic Inconsitancies, ‘Vice News Tonight’ Is Not Without Virtue

Amid the constantly evolving landscape of cable, network, and online news sources, it has become increasingly difficult for more skeptical viewers and readers to take anything that anyone says on most platforms as true. While many journalists and satirists have taken on a role exposing blatantly untruthful statements and claims made over the last few years, it’s hard for viewers across the nation, with their own biases and backgrounds, to reconcile their differences in opinion with what they hear anywhere on TV. Sadly, HBO’s newest program, Vice News Tonight, does little to remedy this trend.

Vice Media isn’t at all new to the world of cable news or publishing. Vice Magazine, Vice Media’s first enterprise, was launched in 1994. Since then, Vice Media has found its niche in the music, television, and film industries with its Vice Music, Viceland, and Vice Films surrogates. Specifically, HBO has been airing Vice, a seasonal 30-minute journalistic program, since the spring of 2013. Each episode of Vice has been composed of two or three in-depth segments covering major news stories or movements from around the world.

While many of Vice’s episodes and segments are rather informative, they’re clearly filmed and edited weeks or months before they air, so few episodes cover weekly news stories. Instead, as some of its episode titles suggest, Vice covers broader-scope topics like “The Future of Energy” and “The State of Surveillance,” and it does a pretty good job of reporting on these topics, filling the large majority of its segments with interviews with professional experts in various settings and collecting first-hand footage and interviews from people personally involved in the situations and movements they’re covering.

HBO and Vice Media’s newest program, Vice News Tonight, aims to bring Vice’s platform and expand it out into a weeknight program, airing five days a week. While Vice News Tonight advertises that it is “not the nightly news,” its nightly format and title suggest that that is just what it is trying to be. The show’s mix of current events updates, summed up in a few graphics and lines of text or speech, and broader, short documentary bits seem to augment its audience’s perception of what the program is really trying to be.

Oct. 24’s episode of Vice News Tonight showcases this strange duality well. The episode opened with a few blips of news stories from the day, like the attack on an E.U. asylum office in Lesbos, Greece, and the United Nations Office on Drugs and Crime report on the increased production of opium in Afghanistan in the past year. The show then jumps to Evan McMorris-Santoro, a Vice News Tonight correspondent, who has been following the Donald Trump campaign around the country, giving a spiel about women voters and their possible sway on the presidential and congressional races ending next month.

Later on in the episode, viewers are given an interview with J. Alex Halderman regarding his thoughts on how vulnerable our voting technology is, an update on Shia forces’ attempts to take back Mosul from ISIS, and finally a look at the sinking Tangier Island in Chesapeake Bay. Interspersed between these five-minute segments are a summary of Sunday’s news that AT&T and Time Warner Cable will merge, and a segment featuring one of Vice’s news journalists on the phone with Robin Shahini, a dual American-Iranian citizen and current prisoner of the Iranian government.

At no point in the episode are any of the show’s bigger segments’ more technical details available to its viewers. There is no clear indication of when the segments in Iraq and Chesapeake Bay or the interview with Halderman were filmed and produced. This trend is not just part of Monday’s episode. It is the case with most of Vice News Tonight’s segments thus far. While each is very well filmed and accompanied by neatly figured graphs that briefly cite their sources, the ambiguity as to these segments’ productions can be troubling. Regardless of Vice News Tonight’s YouTube advertisement stating that the program is “not a nightly-news program,” its airing five days a week and its interspersed daily news clips give the rest of the program an urgency that its individual components might not deserve.

Also, it’s odd that the show’s firsthand documentaries, like Monday’s segment on Iraq, are put next to these more biased segments like McMorris-Santoro’s keeping up with the Trump campaign. In these segments throughout the last two weeks, McMorris-Santoro has exhibited a pretty evident dislike for the candidate. Melding objective reports and segments with more of an editorial voice is dangerous for any news organization.

While HBO’s Vice seems to have found its footing on the network with its seasonal and weekly documentary segments, Vice News Tonight needs a makeover, or at least it needs to sell itself differently. The show’s format, inclusion of current events, and nightly airings throughout the week suggest to viewers that it is a nightly news show when it is not at all.