Home » Counting Down to the Presidential Election, Profs Look Backwards and Ahead 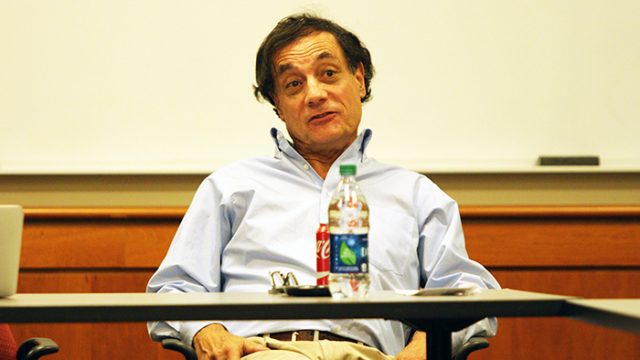 Counting Down to the Presidential Election, Profs Look Backwards and Ahead

Instead of dissecting the presidential candidates’ policies and accentuating their differences, which is how the usual conversation goes in this political climate, R. Shep Melnick, the Thomas P. O’Neill, Jr. professor of American politics in Boston College, focused his talk Wednesday night on the relationship between a likely Democratic president and Republican Congress.

“I’m so sick of this election that I’d rather talk about what’s going to happen after,” Melnick said.

The Eagle Political Society hosted the talk by Melnick and Martha Bayles, a professor in the Arts and Sciences Honors Program, in McGuinn 334.

Melnick started the conversation by comparing Republican presidential nominee Donald Trump, who refuses to accept the reality of the polls and continues to insist he will win the election, to the 1941 film Citizen Kane, about a newspaper publisher relentlessly pursuing power.

Melnick based his premise on the assumption that, with Clinton leading in most polls, she will win the election. Melnick still believes, however, that the Democrats are unlikely to win the House. This would make it difficult for important legislation to be passed through Congress during the Clinton administration. It would also be seemingly impossible to make appointments and pass executive orders crucial to policy making, Melnick said. He believes Clinton will have a tough time pushing nominees.

Melnick believes that the 2016 election has de-legitimized American politics.

He cited a New York Times poll that demonstrated that more than half of those polled believe that political institutions are majorly controlled by a select few with a lot of money. People are under the impression that their own vote holds very little weight. This, combined with claims by Trump in the most recent presidential debate that the electoral process is rigged, has destroyed the general public’s confidence in the current political system.

Bayles took the audience back in time to understand how the political climate developed into its current state, particularly through the media.

Bayles discussed the fanaticism of the election and how, by feeding off of the fodder and excitement surrounding the two candidates, the media has failed to report responsibly and accurately.

“For almost two centuries, the circus of our politics has been accompanied by reasonable, rational reporting, with the downside of this being a lack in revenues,” Bayles said.

She believes the election is now dominated by the opposite—a circus of politics accompanied by irresponsible reporting and great revenues.

The debates and discord surrounding the election have increased TV ratings and ad views to new heights—the media is profiting highly from a political system in shambles.

“Post-modernist propaganda is not so much an information war as it is a war on information.”

-Martha Bayles, professor in the Arts and Sciences Honors Program

“This new media has spurred a gulf between the old folks and the modern folks,” Bayles said.

The last two generations have received their news in different forums and methods, and this consequently affects their perception of politics. Some news outlets that focus on scandalous headlines to attract more readers feed the political circus even more. These sources are driven entirely by profit, Bayles said.

She argued that we can blame the corporate world for the poor media coverage. She furthered this argument by explaining that the current quality of media coverage is due to earlier sincere, albeit idealistic, efforts to free the media.

Bayles is concerned about the effect that uninformed voters, who rely on news sources she believes are biased, could have on the election.

As a self-professed “old folk,” Bayles was interested in hearing what the millennials thought about this media divide. Students talked about the issue of people taking parody articles at face value. It was also commented that millennials take in information from at least five different news sources per day.

While it means more information is coming in, the quality of said information is not always ideal—there is bias and a clear lack of source discernment.This launched a conversation about post-modernist propaganda and how the bias in reputable newspapers, such as The New York Times, will affect the election.

“Post-modernist propaganda is not so much an information war as it is a war on information,” Bayles said.