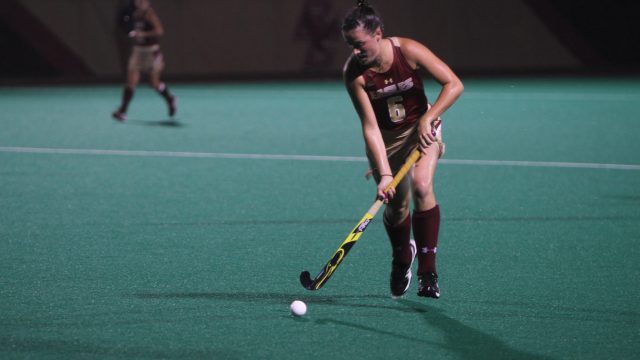 Field Hockey Blows Out No. 16 Harvard

On a cold, rainy Thursday night, No. 12 Boston College field hockey made the short trip to Cambridge, Mass. for a pivotal top-20 matchup against No. 16 Harvard. With the regular season winding down, the Eagles were looking for a marquee win to carry some momentum into postseason play. Steady rain provided unfavorable field conditions, leading to passes skipping long and jumping players’ sticks. With the rain wreaking havoc for the teams, the Eagles capitalized on every opportunity to grind out a 4-1 win over the Crimson.

Harvard (10-4, 5-0 Ivy) came out of the gate firing in the first 10 minutes of the game with two scoring opportunities. BC (9-7, 3-3 Atlantic Coast) goaltender Audra Hampsch halted the efforts, however, with two great saves to keep the game scoreless. The Eagles countered in the following minutes with their first scoring chance that was thwarted by Harvard goaltender Libby Manela. As the game progressed, not only did the rain increase, but the scoring chances for Harvard also did as well. The Crimson continued to pepper Hampsch with shots the entire night, outshooting the Eagles 17 to seven by the end of the night. But sometimes it doesn’t matter who has more opportunities—it’s about which team can take advantage of its chances.

With 10 minutes remaining in the first half, BC made the most of its limited scoring chances, as Ymke Rose Gote set up Brittany Sheenan to beat Manela for her ninth goal of the season, giving the Eagles a 1-0 lead. The Crimson continued its counterattacks to even the score, but to no avail. With 30 seconds left in the half, on just the team’s fourth shot of the game, Emily McCoy cashed in her third goal of the season with an assist from Leah Frome, increasing the Eagles’ lead to 2-0 as they headed to halftime, despite being outshot seven to four.

Harvard came out of the break with just as much aggression as the first half. The Crimson was in control in the first 10 minutes of the second half with several shots and a two-minute man advantage, yet couldn’t put the ball in the net thanks in part to another Hampsch save. Harvard’s failure to capitalize on these scoring opportunities was one of the main takeaways from this game. Lucy Lytle added onto the lead at the 51:56 mark and McCoy would tack on for her second goal of the game. A late Crimson goal was irrelevant to the outcome, as the Eagles rolled past Harvard 4-1.

The Crimson definitely left many goals on the field on Thursday night, considering it outshot BC 17-7 and had the penalty advantage, with 24 fouls to BC’s 38. Nevertheless, despite the statistics, BC capitalized on its few scoring opportunities to make the most of its offensive attacks on its way to a victory in the rain over another top-20 opponent.