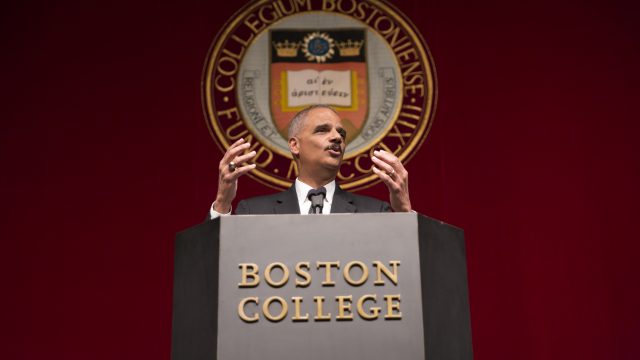 The Winston Center for Leadership and Ethics sponsored a student discussion with former Attorney General Eric Holder this afternoon in the Fulton Honors Library. The audience of about 25 people included undergraduates as well as students from the Boston College Law School. The discussion preceded the Center’s Fall 2016 Clough Colloquium at Robsham Theater, which featured Holder as the keynote speaker.

Holder began the discussion by examining present concerns regarding voting rights in the United States, which was the primary topic of his speech at the Colloquium. He has been a vocal critic of the 2013 Supreme Court case Shelby County v. Holder, which struck down a portion of the Voting Rights Act of 1965. The case stripped the Justice Department of its ability to pre-clear changes to existing voter ID laws in certain jurisdictions. This has allowed several states to pass stringent voting restrictions that were previously considered discriminatory and illegal.

“I think that there is a need for a new, redone Voting Rights Act that is more conduct-based and not geographically like the original,” he said. Holder considers this to be a priority because it is impossible to unwind an election after it occurs.

Holder then allowed the students to guide the discussion and to ask him questions about his career and positions on key legal issues.

“We have to reform the criminal justice system,” Holder said in response to an inquiry about the implicit bias of police officers. “But, I think that the media has done a disservice to people in law enforcement.”

Holder believes that while high-profile shootings get a lot of attention, there is not enough discussion about the police officers who put themselves in dangerous situations and do the right thing. This has resulted in a trust gap between law enforcement and communities of color, Holder said.

Holder also emphasized the fact that he was an early supporter of Hillary Clinton in the 2016 presidential election because he believes that if elected, she will prioritize criminal justice reform.

The discussion then shifted to the topic of terrorism prevention.

“I think we have to do away with racial profiling, as we cannot assume that someone of a particular ethnicity is more likely to commit a criminal act,” he said. “We can’t base prevention activities on stereotyping.”

Holder believes racial profiling is dangerous for national security because a large part of what has been done to prevent terrorism in the U.S. is due to people in Muslim communities speaking up. He believes that several countries in Europe have recently struggled to prevent terrorist attacks because of the lack of trust between Muslim communities and law enforcement.

Holder explained that during his tenure as attorney general, he focused on cases with which he could become intimately involved. He often had to make difficult rulings that were unpopular with Democrats and Republicans, such as his decision to drop corruption charges against Senator Ted Stevens after evidence of prosecutorial misconduct surfaced, and his decision to stop defending the Defense of Marriage Act. He likened the Department of Justice to the biggest law firm in the world.

“The hardest decisions I made as attorney general were death penalty decisions,” he said. Holder thinks that there are “very few people beyond redemption.”

Holder came under scrutiny when the U.S. made the decision to target and kill a terrorist named Anwar al-Awlaki, a U.S. citizen, with a drone strike. Critics have argued that al-Awlaki’s death was an unlawful execution that breached his right to due process.

Holder believes that al-Awlaki’s killing was lawful because he posed a clear and present danger to the U.S., and the only way to protect the American people was to execute a drone strike.

As a general principle, Holder is supportive of efforts to minimize prison time for those convicted of low-level offenses, particularly related to drugs.

“The president has tried to undo some of the excesses of the war on drugs,” Holder said.

As the U.S. attorney for the District of Columbia, Holder presided over some of the largest drug wars in the country. After five years, the position wore him out.

Holder believes in a more progressive approach to dealing with those convicted drug offenses, with a focus on rehabilitation and reentry into society. He is also supportive of community relations projects with police departments that encourage communication between police and children in high-crime areas.

Holder often thinks about what it would have been like for him and his brother to have been raised without a father, like many of the young people who committed offenses while he was the U.S. attorney for D.C.

“When it comes down to it, there are very few people beyond hope,” he said.