Home » ‘Invest in Our Future, Not Our Demise,’ CJBC Chants at Rally
News, On Campus, Top Story

‘Invest in Our Future, Not Our Demise,’ CJBC Chants at Rally

About 40 students stood in the biting rain on Friday afternoon in front of Gasson Hall at Climate Justice at Boston College’s (CJBC) “non-protest rally,” as members of the group sarcastically referred to the event.

Members and supporters of CJBC stood in the Quad holding signs and mirrors that read “No Coal” and “Boston College Supports Climate Violence.” Demonstrators also chanted “Board of Trustees, hear our cries. Invest in our future, not our demise.” CJBC’s primary goal is to push the University to divest its endowment from fossil fuel-related assets, including oil companies Exxonmobil and Shell.

Representatives from the University have stated that they do not view the endowment as a tool to promote social justice. CJBC responds that to not divest is a violation of the University’s ethical investment guidelines, which state that BC “is firmly committed to the promotion of the dignity of the individual, personal freedom, and social justice.”

“You don’t have to be a CSOM major to understand divestment,” said Sissi Liu, a member of CJBC and MCAS ’17. “Morally, it’s sending a clear a message that if it’s wrong to wreck the planet, then it’s wrong to profit from that wreckage. … Even if [divestment] doesn’t immediately impact the bottom line of these industries, it’s starting this dialogue.”

At the beginning of the rally, Liu said that the group had tried to obtain permission to use a megaphone at the rally, but that its request was denied by the Office of the Dean of Students. Instead, speakers used a rolled-up piece of poster paper with “Not a Megaphone” written on the side to emphasize their discontent.

Dean of Students Thomas Mogan said in an email that general policy on amplified sound is that it is only approved for use after 4:30 p.m. He said a megaphone would have interrupted classes in Fulton, Gasson, and Lyons during the protest, which began at 3.

Alex Kontopoulos, MCAS ’17, had choice words for members of the BC administration.

“They never really wanted to listen to us when we call into question their ethics and point out their hypocrisy,” he said. “I just think this should be a reason we should mobilize even more in the future and get even louder, until they can’t ignore us. That way they’ll be able to hear us all the way in their cushy offices in Maloney.”

Kontopoulos was criticizing Mogan in particular, who was at the rally when it began, but had a prior commitment and had to leave early. Kontopoulos said the lack of administrative attendance was evidence of a lack of support for divestment.

Mogan said that he reached out to Alyssa Florack, CJBC’s president and MCAS ’17, to see if the group would be interested in meeting with him to discuss its goals. He expects CJBC will reach out to him with possible dates and times to meet next week.

Up until a week-long protest beginning on Oct. 11 called “Whose Side Are You On?,” the group had been largely silent this school year. In the past, CJBC has been a source of tension on campus. In March 2015, Liu received disciplinary probation for leading CJBC in an unregistered vigil that took place the month before. Liu appealed the decision, but it was rejected by Mogan. CJBC received formal recognition from the University in September 2015, which allows the group to register protests, post fliers, and reserve rooms to host meetings on campus.

Liu said in an email Sunday that CJBC’s goal of divestment is likely very long-term given what she called a lack of engagement from higher-level administrators on the topic. She also said the group was not aware beforehand that Kontopoulos was going to criticize administrators directly.

“We held this rally in part to affirm and assure the rest of student body and administration that Climate Justice at BC is not going anywhere,” she said. “We will not rest until BC divests.”

Matthew Thacker, a junior at Boston University, also attended and spoke at the demonstration. According to Thacker, BU has an advisory committee that recommended divestment from fossil-fuel companies to its Board of Trustees at a meeting in April. That includes companies that are searching for additional fossil-fuel sources to tap in the future.

Kenneth Feldman, chairman of BU’s Board of Trustees, said in a letter dated Sept. 20 that the Board would avoid tar sands and coal investments on a best-efforts basis, though he acknowledged potential difficulties with implementation—much of BU’s endowment is invested in commingled funds spread across many different companies and industries.

“It’s incredibly vague, non-specific language, and it’s specifically working away from divestment, so we’re very skeptical of it, but they have been a lot more supportive than the administration has here,” Thacker said.

CJBC’s mission has also attracted the attention of some local alumni. Robert Ryan, BC ’66, found out about CJBC four years ago at a talk by writer and activist Bill McKibben, who spoke about public relations efforts by fossil-fuel companies to disrepute climate change activists. For Ryan, who has always been interested in environmental issues, McKibben’s talk made him realize the importance of divestment, and he’s been involved with CJBC’s efforts ever since. He said he is frustrated with the lack of action by BC’s leaders.

“I care deeply about the place, so there’s a part of me that’s just sad,” Ryan said. “It’s just mind-boggling to me on these crucial, societal issues that they’re coming up short. … I don’t know why the president and trustees don’t want to be part of the colleges and universities that are stepping up. Why not?” 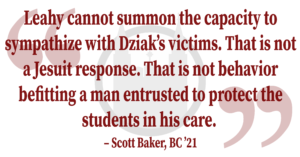