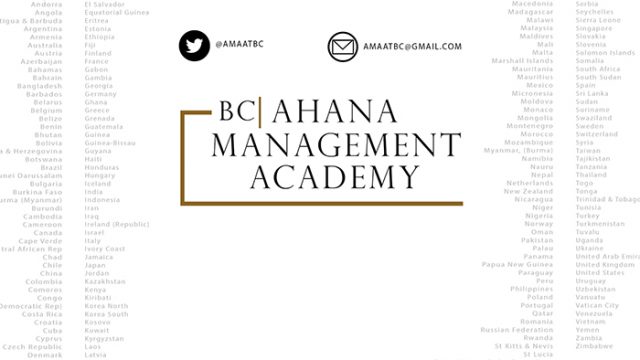 In just the last year, one of Boston College’s premier pre-professional clubs, the AHANA Management Academy (AMA), has grown by half, jumping from 250 to nearly 400 members. AMA is a club that works with students of color on things such as resume-building, creating a LinkedIn, networking, and interviewing through events and workshops.

AMA is different from other pre-professional clubs in that it caters to the biggest group of people, said Brian Yoon, AMA’s treasurer and MCAS ’18. AMA is not career-specific, nor does it focus on any one letter of the AHANA acronym. Instead, it focuses on creating events that may interest a wide range of people in various areas of business.

“We hope to open the eyes of students to various professional paths that are available to them while connecting them with the resources and people that will aid them in pursuing their professional interests and passions,” said Andrew Lim, AMA’s co-president and CSOM ’17.

It is also important to note that AMA is not CSOM-exclusive. In fact, Yoon started off as a pre-med bio major, and AMA was, for him, the catalyst to break into the business world. The club is an opportunity for anyone who is interested, to any degree, in business.

AMA’s objective is particularly important to address right here on the BC campus. People aren’t entirely aware of how difficult it might be for AHANA students to make it in the business world. While AHANA students may get the internship, it’s what follows that often proves to be a struggle for them.

Some students come to BC more privileged than others, said Michael Jang, AMA’s vice president and CSOM ’18. In short, explained Jang, the underprivileged student just doesn’t have the same connections that others do. It is AMA’s goal to level that playing field. Thus, AMA seeks to focus on honing interpersonal skills as well as affording students opportunities that they wouldn’t normally have.

“I think Boston College, CSOM in particular, has such a bad rap of being just snarky, rich, white business folks,” Yoon said. “But in reality, there are a lot of students in there who are passionate, they just don’t see those faces being highlighted.”

One of AMA’s particularly successful events was its AHANA Networking Night. Last year was the first time it ran the program, and it attracted nearly 80 attendees, AHANA and non-AHANA students alike. They reached out to 25 AHANA alumni from around Boston, ensuring a diverse selection of professions, to create a panel. The panel was assembled to create a transparent conversation between AHANA professionals and students about what it is like to be a person of color in the business world. For the future, AMA hopes to transform the event into an AHANA recruiting night to connect more students to recruiters and increase internship opportunities.

AMA debuted another event last weekend. On Saturday, AMA hosted ABLE: AHANA Business Leaders Experience Conference. The conference was in collaboration with the Career Center, its biggest endorser, and included speakers and workshops for students. The conference was meant to create a dialogue on being a person of color, or even being a woman, in the workforce is like. The hope is that, after attending any of the AMA events, students leave feeling more confident about their pre-professional development and could really see themselves in a certain profession, Brian said.

Though AMA’s main focus is business, it also creates a community among its members. AMA’s main way of creating a sense of community is through its mentorship program. Not only has it met great success—about 70 percent get an internship by the end of freshman year—but it acts as a type of stepping stone for freshmen into the AHANA community. It’s all about fostering a sense of community while also equipping them for the business world.

“We’re not considered a culture club on campus,” Jang said. “But we want to be considered half-business, half-community.”

Moving forward, AMA hopes to grow the mentorship program, see more high-profile speakers, and connect more companies to its members, Lim said. With the advent of fall recruiting, events to train students for recruitment are happening at the same time recruitment actually starts. AMA hopes to target freshmen and sophomores more, so as to train them early for internships. No matter where AMA finds itself in the future, however, AMA’s chief goal will continue to be promoting diversity within the workplace.

“I think every student that we have at BC, they’re all amazing people,” Michael said. “We have such a unique background and education. I think we are very marketable in industries.”