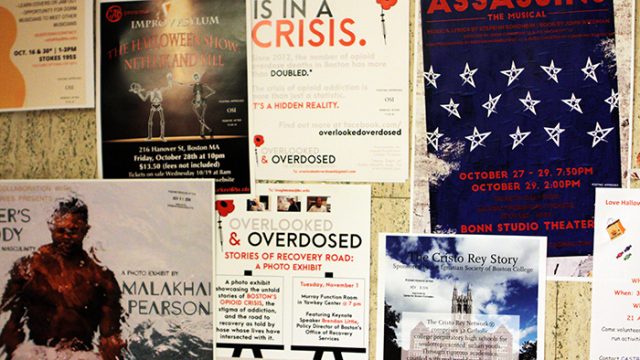 An estimated 2.1 million people in the United States suffer from substance abuse disorders related to prescription opioid pain relievers, according to the National Institute on Drug Abuse (NIDA). An estimated 467,000 people are addicted to heroin. The number of unintentional opioid deaths has more than quadrupled since 1999, according to NIDA.

Alarmed by the growing severity of the opioid crisis in Boston, a group of 14 Boston College students created a photo exhibit titled “Overlooked and Overdosed: Stories of Recovery Road.” The group of students aims to share the untold stories of Boston’s opioid crisis and works to destigmatize addiction.

The exhibit is funded in part by The Heights, as well as the Winston Center for Leadership and Ethics, University Health Services, and the Thea Bowman AHANA and Intercultural Center, as well as 18 other groups. The photo exhibit will be held this Tuesday at 7 p.m. in the Murray Function Room in the Yawkey Athletics Center.

The idea for “Overlooked and Overdosed” came out of the group members’ various community service experiences in Boston this past summer, when members did an abbreviated six-week PULSE program through the Gabelli Presidential Scholars Program. Many of their placements were near Recovery Road, a 1-mile stretch of Massachusetts Ave. in the Boston Medical Center area also called Methadone Mile, and dealt with several facets of the opioid crisis. For example, one group member worked at a correctional facility and another worked at a women’s shelter. When they found out that Recovery Road, close to their everyday service, was the epicenter of the crisis, they started to inquire more.

“The student body isn’t very well informed, which is why our project is so important.”

“We did some more digging and found that the opioid crisis is something that intimately interacts with all of our experiences, but spans across race, class, and gender,” said Sydney Apple, a group member and MCAS ’19. “And that intrigued us enough that we decided to pursue this line of investigation to try to understand this multidimensional issue.”

The group hopes to make the BC community aware of the crisis and to destigmatize those affected through the photo exhibit, which is set up to be similar to Humans of New York, a photo series in which every picture is accompanied by a quote from an interview with the subject.

The event will begin with a talk from Brendan Little, the policy director at the Mayor’s Office of Recovery Services (ORS), which coordinates addiction recovery efforts in Boston. ORS is the first and only addiction recovery office in the United States. Little will talk about his experience working in the Mayor’s Office and how the opioid crisis has touched him and given him an important perspective.

The photo exhibit, which is the main event, will feature photos of everyone the group has interviewed and photographed. Video excerpts from the personal interviews will play at the event.

“We hope that people come away feeling like they’ve learned not just about the crisis itself and the scope of it, but how it affects individual people in Boston,” said Reed Piercey, a member of the group and MCAS ’19.

“The student body isn’t very well informed, which is why our project is so important,” Apple said.

Through its photo exhibit, the group seeks to humanize and destigmatize the people affected by the opioid crisis. it views the opioid crisis as one of the most serious public health issues facing the U.S. today.

There will not be just one policy that changes this problem, Apple said, but some steps need to be made to improve the policy.

“I think that it needs to be something more coming from society, because it’s all about stigma,” Apple said. “And if people don’t feel comfortable calling EMS to get someone help after they’ve overdosed, then that person is not going to live.”

Through this project, group members interviewed and learned from a diverse range of people involved in the opioid crisis, opening them up to new ideas and perspectives.

“One of the things you’re told a lot is find your passion, find what you love doing, which is obviously way easier said than done,” Piercey said. “But all the people that we talk to are working on this issue because they deeply care about it, and it gets them going, it sets them on fire.”