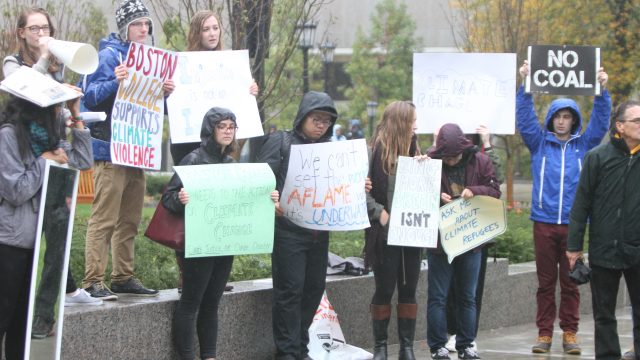 Last Friday, Climate Justice at Boston College (CJBC) held a rally outside Gasson Hall as part of its efforts to convince the University to divest from fossil fuel-related stocks, such as oil companies. The effort came after a protest during the week of Oct. 11, which also urged the University to divest and asked “Which Side are You On?” Friday’s rally was an improvement on this previous event, in that it was better promoted, including a table set up in the Academic Quad that told people about the planned demonstration and CJBC’s cause.

One issue with the rally was an ad hominem attack on Dean of Students Tom Mogan, who attended the beginning of the rally but left early due to a prior commitment. Mogan’s departure was cited as evidence of the administration’s lack of support. While CJBC should continue attempting to grow and put itself in a position to be heard by the administration, attacks like this are not the way to do that. Mogan has been one of the most visibly supportive administrators at the University when it comes to student groups like CJBC. He contacted CJBC before the rally and is currently attempting to arrange a meeting to discuss its goals. Beyond this, he has maintained an active physical presence at protests and other demonstrations carried out by the student body, including the “Silence is Violence” march on Sept. 29. When a group is trying to get something accomplished with a stubborn administration, attacking one of the administrators who is trying to help only serves to alienate the people that must be convinced.

The comment was not sanctioned by CJBC, but the organization’s horizontal power structure seems to have prevented complete organization of what would be said at the rally. In order to effectively promote the cause of divestment, professionalism and oversight are necessary so that these demonstrations can convince and persuade the administration instead of isolating and further entrenching it in its current positions.

An example of this occurred at Boston University, where a pro-divestment demonstration included the presentation of a document proposing the changes that Divest BU would like to see, including increased efficiency and efforts to improve sustainability and combat the effects of climate change. A few days later, BU pledged to avoid fossil fuel holdings on a best-efforts basis. Although BU did not fully divest, as the students wanted, it was still a step in the right direction. The students’ demonstration brought about a change. This exemplifies the outcome that students approaching this issue can achieve through planning and executing efforts such as these. In the future, CJBC should avoid ad hominem attacks and instead focus on determining the kinds of demonstrations, rallies, and proposals that the administration would be most likely to consider.