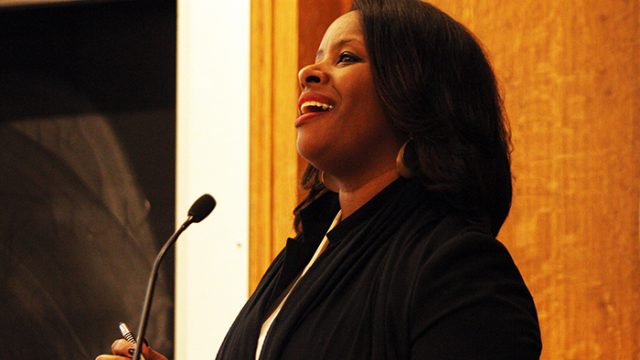 Educator and writer Tamura Lomax gave a lecture to students on Thursday titled “Imagining Black Resistance in the House that Slavery Built.” During the lecture, Lomax described the digitized world where signification of “blackness” takes place in both mass and popular media. The Black Lives Matter movement, the killing of Michael Brown, and the 2016 election are all examples of blackness being wrongfully portrayed in the media, according to Lomax.

Lomax began the presentation with something she said is unusual for her, a warning. She asked the audience for its thoughts to help her create a solution as she described the problem.

“The warning is, I didn’t come with the answers,” Lomax said. “I’m really struggling through this talk.”
Lomax argued that the conception that people have of African-Americans is not objective, but rather based upon the images and understandings that the world has pressed upon them.

“At the heart of white terror and black trauma is the issue of interpretation, signification, re-presentation,” she read. “The black man is the symbol of evil, the torturer is black, Satan is black, one talks of shadows, when one is dirty, one is black. It would be astonishing if the trouble were taken to bring them all together to see the vast number of expressions that make the black man the equivalent of sin.”

Lomax pointed to Ferguson, Mo. police officer Darren Wilson’s comments on the appearance of Michael Brown to illustrate how these ideas of African-Americans are inherently tied to evil and affect reality. After the shooting, Wilson explained that Brown looked like a demon and that while grappling with Brown, Wilson felt like a 5-year-old holding onto Hulk Hogan. Lomax argued that this is the result of a world in which media representations of black men are always hyper-violent, hyper-aggressive, and something different from human.

Lomax then said that tactics aimed at demolishing the racial hierarchy cannot only focus on material brutality, but rather must interrogate the code by which blackness is defined.

“The work, I think, of black radical resistance must include unbinding blackness from the discourses on dirtiness, sin, and evil,” she said.

Throughout the presentation, Lomax repeatedly emphasized the need to confront this particular moment in history. A defining feature of this moment, she argued, is the more democratized nature of media and images in the world of the internet. Black scholars have overlooked this development. They must engage in black digital studies, analyzing the way African-Americans attempt to change their image in the digital world, she said.

“The digital world allows for the decentralizing of the production of knowledge and the mass mediation of alternative structures of meanings and representations,” Lomax said. “In this context, neo-colonial, white supremacist texts and meanings don’t get to have the last word.”

At the same time, Lomax counseled against a view of the internet and modern media outlets as a cure-all to problems of race and signification. She believes that social media and other information dissemination systems are not immune to the racist undertones that have characterized media in the past.

Lomax said that her method of research is one of analyzing the conditions that enable racial oppression in order to chart the horizon toward a better future.

“What I’m calling for is deconstructing what is and imagining what should and could be,” she said.