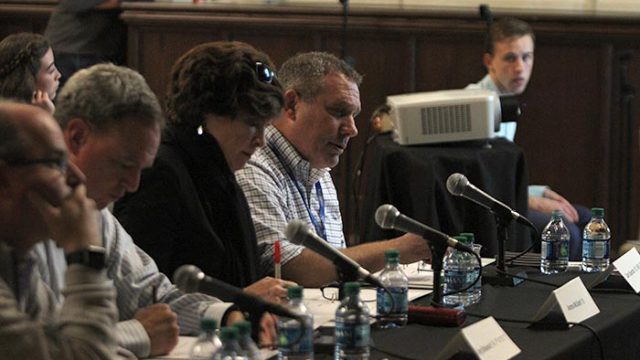 The night was divided into three different sections: social impact, services, and miscellaneous ideas. Each section was composed of five different competitors. After the students completed their pitches, the audience was encouraged to use the provided “thunder sticks,” two large blow-up sticks, and applaud for them.

The contestants were judged on various aspects of their pitch, including feasibility, impact, and engagement. The four judges, Greg Strakosch, BC ’84, Peter Bell, BC ’86, Sam Spector, BC ’85, and Andrea McGrath, BC ’89, had two minutes to ask any questions they had regarding the pitches.

After each group, the audience members were asked to vote for their favorite pitch via text, and at the end of the night, the audience voted on a crowd favorite.

Students were granted awards, including Social Impact, Best Service, Crowd Favorite, and Best Pitch. Over $1,500 was given to winning students, with the first-place pitch taking home $500.

Chapman took home both the Crowd Favorite and Best Pitch for his idea Darkroom. Darkroom is a web-based platform for anyone to sell professional-quality prints. All a photographer has to do is upload a photo, set a sales goal, and set a time limit. If you sell your goal within that time, Darkroom will fulfill every order for you. This means amateur photographers can sell a large number of prints without the financial commitment of buying them in bulk.

Chapman found inspiration for his idea through a previous project he worked on, Pstcrd.com, a platform for Instagram. Then, he networked with photographers and took an interest in photography himself. Through this process, he recognized that many photographers do not know where or how to sell prints of their work. Chapman developed Darkroom to make it easier for amateur photographers to sell prints at the same economies of scale as a professional.

“The biggest thing we’ve learned is though all our failures. Because being an entrepreneur you have to be comfortable with failure and you have to a way about your that you just push through barriers.”

“Get involved with the {Shea Center for Entrepreneurship}, the entrepreneurship events,” Chapman said. “That’s the most important thing that I’ve done at BC, just getting exposure to this environment, because people get so pumped about startups and ideas and creativity.”

The winner of the Social Impact award was Pedro Guimaraes, CSOM ’20, with his product BusWays. BusWays is an app that grants parents the ability to track their children when they are on the bus to school through a GPS tracking chip.

For Guimaraes, the inspiration for his product was personal. He saw his own mother worry about his 4- and 12-year-old brothers when they got on the bus. His mom was constantly calling him to check on his brothers and make sure they were on the bus. With his product, parents will always know if their kids are on the bus and get to their destination safely.

“What I believe really helped were my mentors and the people behind it who gave me the experience,” Guimaraes said.
Guimaraes said his mentors were fellow entrepreneurs with real-life experience who knew the process and had business contacts. Guimaraes said his biggest challenge was putting himself into the corporate world and connecting with professionals.

Dan Marino, CSOM ’19, won Best Service with his product VenU. VenU aggregates data to provide the best experience for audiences of live entertainment. It acts as an intermediary between artists and sports teams and their audiences. Users download the app to gain first access to certain content and can partake in visual VIP experiences.

Marino’s product has been evolving since last November. After doing a different elevator pitch alone, he took on Ben Li, CSOM ’19, as his business partner. The night the application for the Elevator Competition was due, something clicked for Marino, and he and Li scrapped everything they had been working on since November. That night, they conceptualized their idea for VenU.

“The biggest thing we’ve learned is though all our failures,” Marino said. “Because being an entrepreneur you have to be comfortable with failure and you have to a way about your that you just push through barriers.” 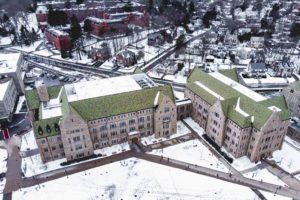