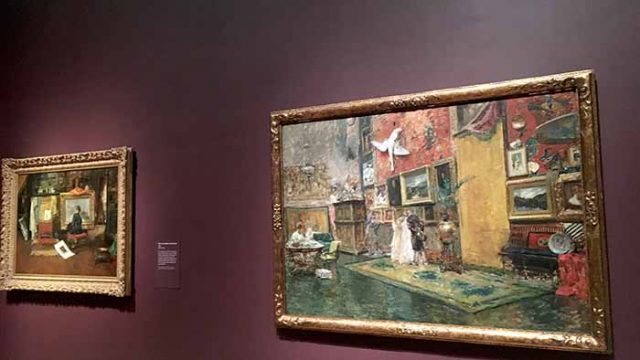 History books prefer to cite artists such as Thomas Cole, George Healy, and Emmanuel Leutze as the epitome of  19th-century American painting. But with one of its most recent exhibits, the Museum of Fine Arts hopes to add a new face to the stories that are often told.

With its William Merritt Chase Exhibit, which opened to the public on Oct. 9, the MFA aims to showcase the otherwise underrepresented American painter—for which the exhibit was named—in an exhibition on display for art enthusiasts, as well as all other curious minds, until Jan. 16, 2017.

Having not been on formal display since 1983, and absent from Boston since 1886, Chase, who also founded the Parsons School of Design in New York City, brings a refreshingly vintage perspective on American 19th-century art, a view that the museum generally lacked prior to the exhibition’s arrival. Before its arrival in Boston, Chase’s art was on display at the Phillips Collection in Washington D.C., and after its feature in Boston, the exhibition plans to move to the Fondazione Musei Civici Venezia in Italy.

With an approximate total of 60 public and private lenders who have accumulated Chase’s work over the past 100 years, MFA Boston curator Erica Hirshler can be recognized for gathering and extracting a variant of 80 of the artist’s most celebrated works of pastel and oil paintings. One of the most intriguing reasons to visit any museum is to see an artist like Chase, who can be hard to define in a specific style, she said.

“It is nearly impossible to associate with [Chase] one movement,” Hirshler said. “In one work, his emphasis on light may appeal to the Impressionists, whereas in another he may hone in on his skills as a portraitist. Although [Chase] is not as well-known, so I think this exhibition has been and will continue to act as a discovery for people.”

The exhibition is particularly successful in displaying the striking variety in his work—Chase is known for dark interior portraits, studio scenes,  and seaside views, both with or without people. Each of the carefully chosen pieces in the exhibition strikes visitors with its jubilant tone that results from the looser brush strokes Chase employed, and his special attention to light and shadow.

Some of his most popular pieces currently on display include The Ring Toss, which brings light to his children playing in his work studio while at the same time showing, as an artist, how he had a profound connection between his professional and personal life. Another notable work of similar technique and theme at the museum is Hide and Seek, in which Chase’s children are illustrated playing a game of hide and seek in his studio.

Although Chase is not usually grouped with masters like Rembrandt or Jan Van Eyck, he both admired the art of the past and used it as inspiration for making the masterpieces of his own time. His unique temporal perspective is evident in the settings he illustrates, the techniques he uses, and the people he chooses to portray. This rare perspective, offered through the distinctive work of an extremely innovative and forward-thinking master, currently lies at the fingertips of all Bostonians.

The Chase exhibit puts the spotlight on both the underappreciated and under-displayed work of a truly talented contributor to American art. Despite his lack of widespread international popularity in comparison to artists such as Leonardo Da Vinci or Claude Monet, his successful manipulation of techniques of the past supplemented by more modern artistic practices make this display unique.

Though the Chase exhibit is only a temporary resident of the Boston area, Hirshler is working on creating future projects for people to enjoy at the MFA, as well as other museums throughout the country. Though still in the preliminary stages, she hopes to organize an exhibit that visualizes the continuities and changes over time with respect to the practice of art collecting in the 20th century.

“Since the exhibit first opened in October, not just art enthusiasts, but everyone has really loved experiencing the Chase project and they’ve felt that they both learned and saw something new and beautiful,” Hirshler said. “What is meaningful to me as a curator is the quality of the interaction to what we show the visitor and for people to positively respond and say that they loved it is particularly profound.”