Home » The State of the Election 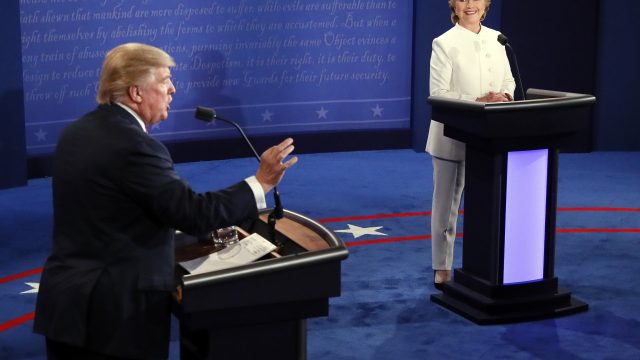 The State of the Election

As I wrote before, it ain’t over ’til it’s over, and the only poll that matters is Election Day. This weekend’s revelation that the FBI is re-opening its investigation into Hillary Clinton’s emails only proves what I wrote there. As far as I know, the pollsters and bookkeepers are still predicting a Clinton victory, and it still seems likely, especially knowing how the electoral map is organized—but less likely. We now hear visceral attacks against FBI Director James Comey for revealing this information, which is really extraordinary. What else could he have done? Does the left not want the FBI to do its job? Or does it want him to break his oath to alert the committees he had promised to alert to any changes in his testimony? “But the timing!” we hear, and the timing is indeed unfortunate for Clinton. Yet the FBI’s job is fundamentally apolitical, and taking political concerns into whether to announce a change in testimony would be the most political move of all. The criticisms of the letter’s “vagueness” are equally untenable—the FBI needs to be vague while conducting an investigation. Comey’s letter was no attempt to sway the electorate against Clinton, as Clinton’s campaign and prominent Democrats are now proclaiming. Au contraire, it represents the only possible action of an honorable man in a tight spot.

It only shows how tight this election has become, even before news of Comey’s letter broke on Friday, that Michael Moore, of all people, thinks that Donald Trump is going to win. Interestingly enough, his major argument is reminiscent of one I used: that middle- and working-class people are fed up with the “establishment,” that Trump offers significant change for a “system” that they believe is shooting their opinions down. To wit, such individuals provide the very image of Roosevelt’s “forgotten man,” and Moore believes that they’re going to vote for Trump even if they don’t agree with him. As much as I cannot believe that I’m agreeing with Moore, he is making a good point here, one that is simply ignored by both Clinton and the majority of our media—the “little people” are rising up, angry and refusing to “take it anymore.”

One can write an excellent book (and many have) on how the Democratic Party lost the support of these blue-collar people, but I think it is sufficient to deliver a personal anecdote: my uncle is very much blue-collar, a worker on the Long Island Rail Road, a proud union member, and a proud Trump supporter. Indeed, of all my family members, he is probably the biggest Trump supporter—he sees in Trump a plain-speaker who will take on the elites and fight for the little guy.

While Trump’s candidacy shows this important political shift, it is true that partisans on both sides are making too big a deal out of the results of this election. (How many times have you heard, “I’m moving to Canada if Trump gets elected?” or “There’s going to be a revolution if Clinton gets elected?”) Of course, there will not be a mass exodus to Canada or another civil war, no matter what happens. Indeed, I’m reminded of Russell Kirk’s autobiography, in which he recounts that just about everyone in his hometown of Mecosta, Mich., was saying that “[there’d] be a revolution” if President Hoover wasn’t bolted out of office. Indeed, in those days of Depression and the revolt of the Bonus Army, it was far more likely that there would be a revolution than today—and there wasn’t. We got along, as we Americans always do, and the republic did endure—and, despite everything going on nowadays, if it endured the Depression, it will endure now as well.

This is the season when ghosts are said to wake and walk the earth and when the border between this world and the next is at its thinnest. Let us remember, then, the morals of all ghost stories on this Halloween, with an equally spooky election lurking around the corner: the past is still alive, ready to teach us eternal truths one way or the other, and we ignore it at our peril.

Why We Need Black Lives Matter
Eating the Frog: How to Avoid Procrastination