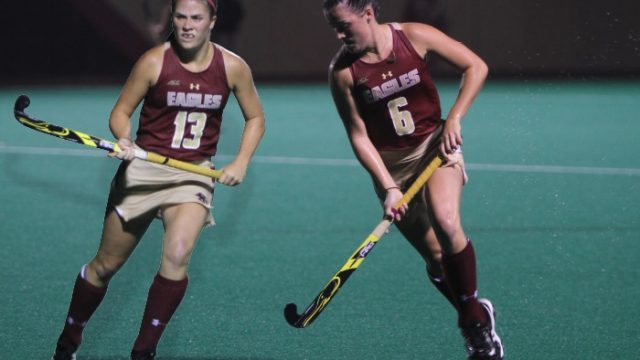 Standing side by side, Emily and Eryn McCoy look almost identical.

Both have long, straight brown hair, blue eyes, and big infectious grins. There are few subtle differences that distinguish the two. Even so, only those who know them best can tell them apart. Whether it is ear piercings, the one-inch gap in height, or a birthmark, these physical traits are the only things that make these two visibly different. But you’d have to look really close.

The “twin thing” is something the McCoys have constantly been asked about. Everyone seems to be fascinated with trying to tell them apart and learning about what it is like to have a twin. After being asked these questions for years, even the McCoys struggle to pinpoint key differences. But there is one thing that easily distinguishes them.

“Emily really just tells it how it is, and she is much more sassy than I am,” Eryn said. “I’m more laid back and quieter than her. I think that is the big difference.”

Even with the distinction in personality, freshmen on the field hockey team have trouble telling the two seniors apart. That’s normal—after all, they look so similar. But even their head coach at Boston College, Kelly Doton, struggles at times.

“Coach will once in a while get it wrong and then she will be like, ‘Oh, shoot, I knew that!’” Emily said. “But for the most part they are pretty good.”

Born only two minutes apart, Emily and Eryn have been a unit since day one. They grew up in Lancaster, Penn., a big country town that is fondly referred to as the “hotbed of field hockey.” If that was not enough to guarantee this duo would play the sport, their mom, Lisa, made sure her daughters loved it as much as she did. When the girls were 5, Lisa got them a field hockey stick—only one, mind you. They’d go in the backyard and hit a ball around for fun, taking turns with the stick. The backyard play turned into a family passion, and Lisa soon became the twins’ role model in field hockey.

“She was always the one that taught us and always had a stick in her hand,” Eryn said. “Even though sometimes I didn’t like her being our coach, she was really helpful for us and beneficial.”

They followed in their mother’s footsteps and played field hockey at Penn Manor High School, where their mom became the team’s assistant coach. With their dad, Jim, who never missed a game, and older brother, Evan, the McCoys became a field hockey family.

Growing up, the McCoy sisters were always playing together, a connection that motivated them to get better. They occasionally tried to help each other and point out places for improvements, then decided it was best to leave that job for the coach. Even though they wanted to help each other, your sister can be the last person you want to hear criticism from. Always having someone to practice with helped the McCoys greatly, but in the competitive hotbed of field hockey, that was not enough.

So to take their game to the next level, the McCoys joined a club team to practice year-round. The two would travel across the country, to California, Arizona, or Florida, to showcase their game at field hockey festivals. Emily enjoyed them in particular because it was like taking a vacation. That, and the fact that it’s a better place to get a tan than southeast Pennsylvania.

That hard work and fun paid off. In high school, Penn Manor made it to the state championship during the McCoys’ senior year. The team won sections, leagues, districts, before heading to states. Though Penn Manor didn’t win at the state level, the McCoys look back on that game with fond memories because it was proof that they left their mark and worked as hard as they could. Lisa cherishes these memories as well, even with the confusing relationship between family member and coach.

“I tried hard to keep the lines of mom and daughter straight when we could, but for the most part it was really fun,” Lisa said.

Because they were so successful together in high school, the McCoys knew they wanted to take their game to the next level, but as a package deal. Going through the recruiting process was difficult because many schools wanted only one of the girls. They were willing to take the other, but the McCoys did not want to feel as though they were the extra baggage in a deal.  So when a school did not want both of them, it was crossed off the list. Luckily, BC wanted both.

“Ever since we watched them in high school, we knew that they were a step ahead,” Doton said. “They have those field hockey skills that not a lot of people in the country have.”

The McCoy deal has been a great benefit to BC. Their connection on the field is unmatched. Because the sisters have been playing together for over 15 years, they have that twin telepathy. If one passes to the other, the other twin knows exactly what she is thinking and where she is going to go next. That uncanny accuracy has allowed the McCoys to succeed and continue to build on the legacy they will leave behind after graduation.

The two have helped the Eagles soar into the national rankings, complete 13 upsets against top-10 teams, and score over 165 points combined. And this is just the start. Last year, for the first time ever, BC made it past the first round in the ACC Tournament. Emily played a huge role in this game, so naturally, it’s her favorite BC memory. The Eagles were up against Wake Forest in a tight battle. Emily scored the tying goal to send the game into overtime, allowing the Eagles to complete a 4-3 win and move to the next round.

Recently, Eryn had a great achievement of her own. Almost three weeks ago, in the 3-1 upset against No. 8 Louisville, Eryn scored her 80th career point, allowing her to break into BC’s top-10 all-time scoring list.

Even with these great achievements, there is never sisterly competition on the field. They are always neck-in-neck in almost every stat category, including shots, assists, game-winning goals, and even the all-time scoring list. But they don’t pay attention to it.

“It never bothers me,” Emily said. “I’m not like, ‘Oh, I have to get ahead of her.’ I wouldn’t really say there is a competition.” Because their positions are so different, Eryn, who is a forward, cannot compare herself to her sister at midfield. Emily is willing to point one thing out— their differences in aggression.

“It’s not like Eryn isn’t aggressive, but I would say I’m more intense on the field and feisty,” Emily said. “Other than that, I would say we are fairly similar.”

Now, the season is almost over, and it is time for the seniors to soak up their final dose of field hockey before it is time to move on.

“I feel like I was just a freshman last year, and now I’m a senior and we don’t have many games left,” Eryn said. “It’s exciting, but very sad at the same time. I don’t want it to be over. Come November, we aren’t going to have anything to do. It’s sad, but exciting to see how far we’ve come.”

Both sisters have high hopes for the rest of their season. They want to work hard for their team in order to have an exciting rest of the year. Each of them wants to surpass last year’s achievements and make it past the second round in both the ACC and NCAA tournaments.

Doton believes the twins can do it.

In November, the McCoy sisters will have their final pregame meal as a team, then the twins will sit in the locker room while Eryn braids her sister’s hair one last time. Emily will take her last pregame walk outside to calm her nerves. They will dance as a team in the locker room once more before silencing the speakers. And after never missing a game, home or away, the faithful McCoy family will take their final seats in the bleachers to watch the twins play one more time.

But it will not be the last you see of them. The McCoys have been working together their whole lives to improve to the next level. With a legacy at BC coming to a close, only time will tell where they will leave their next mark.