Home » For Progress With LGBTQ Community, BC Must Look to History Rather Than PR 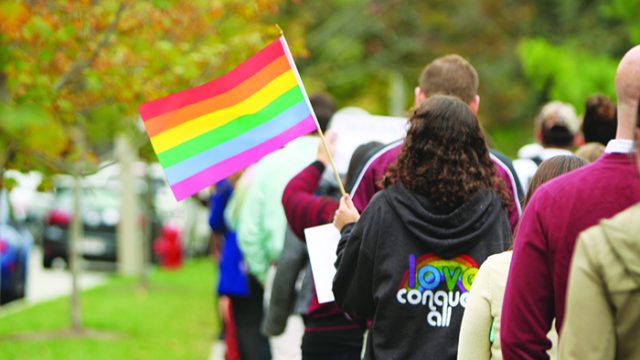 For Progress With LGBTQ Community, BC Must Look to History Rather Than PR

As outlined in The Heights’s “Walk The Line,” Boston College has a long and fraught history involving the treatment and accommodation of LGBTQ students. Over the past three decades, the University has seen controversies over the holding of an LGBTQ dance, the acceptance of an LGBTQ student organization, the institution of an Allies program, and, most recently, the creation of an LGBTQ resource center. A troublesome thread runs through all of these issues: BC’s slow response to student concerns and fast response to public relations problems.

In 2000, The Princeton Review compiled a ranking of schools based on tolerance. In the “Alternative lifestyle not an alternative” category, BC came in second out of 345 colleges. The University remained on the list for several years, each time prompting a response from University Spokesman Jack Dunn that the ranking lacked merit. This is ironic, considering the promotional importance of the University’s current No. 22 Forbes and No. 31 U.S. News and World Report rankings.

Around the same time as the Princeton rankings, BC received further negative attention regarding LGBTQ tolerance. A report on anti-gay activity compiled by the advocacy group People for the American Way listed former University President Rev. J. Donald Monan, S.J’s, letter denying the Lesbian, Gay, and Bisexual Community at Boston College (LGBC) a registration request in its “Hostile Climate 1995” report. This negative publicity was seen in the television show Boston Public, which depicted a gay football player who hesitated to attend BC because of its anti-gay reputation. These levels of negative publicity should not have been necessary in prompting further action, but they clearly played a role in the further development of LGBTQ resources on campus.

It was shortly after all of this unwanted publicity that BC began taking steps to address the problems that had been brought up by LGBTQ students since the ’80s. LGBC had been denied University recognition in 1985, and in 1986, Haley House, a BC-owned building that was a live-in community for the Social Justice Center and members of LGBC, was taken over and used for other projects. And yet it wasn’t until 2003 that the University recognized Allies, a group for LGBTQ students and allies. Even then, the group remained a compromise and refrained from advocacy from LGBTQ causes. It wasn’t until 2005 that the University added sexual orientation to its non-discrimination clause, after repeated years of negative rankings, a developing reputation for LGBTQ intolerance, and the efforts of groups like the Undergraduate Government of BC.

Recent coverage by The Boston Globe shares some of these negative connotations and may lead to further progress on LGBTQ issues, such as the establishment of an LGBTQ resource center. Although this would accomplish some of the goals of LGBTQ students and allies, it is not an ideal situation. The University should respond to consistent student concern, not only bad PR from news sources. The center would make BC a more attractive place for prospective students and would improve the atmosphere on campus for LGBTQ students, which is something the University should understand through listening to student’s over the years and not through negative news coverage.

There has been a decade’s worth of student interest in the establishment of an LGBTQ resource center. An unofficial LGBTQ resource center was shut down in 2006. Calls for a resource center were renewed in 2010 when Kelsey Gasseling, former chair of GLC and BC ’11, BC Law ’18, put the creation of the center in GLC’s 10-year plan for improving LGBTQ resources on campus. In 2015, these calls grew louder as a group of outgoing alumni, led by Nanci Fiore-Chettiar, former UGBC president and BC ’15, pledged to withhold donations until a center was created. This consistent concern over a decade should prompt action more than negative coverage. For years, students have requested the creation of a resource center as well as increased LGBTQ staff members. The Heights has affirmed these requests in the past, arguing that a resource center is necessary for these students. Space is an issue, but the creation of the center is by no means impossible. A centralization of resources, followed by the designation of an area, would be the first few steps before any larger establishment would be built. If BC is going to become a truly inclusive, tolerant, and accepting university, it must provide students of all orientations with the resources necessary for them to be a part of the University. Over the past 30 years, progress has come in fits and starts. At times, the University has listened to student concerns, and at times, has valued its image rather than immediate problems on campus. Progress should not be contingent on external reactions, but rather should come from the internal need for change.

As a school that pushes its students to be men and women for others, administrative action should respond to student concern over issues of tolerance and acceptance on campus and not wait until negative publicity forces action.The creation of an LGBTQ resource center is one necessary step toward this, and in the future the administration should work to respond quickly and effectively to concerns without waiting for negative coverage to force its hand. The rights and needs of students ought to take priority over public relations concerns.