Home » Professors Discuss the Role of Religion, Ethics in the 2016 Presidential Election 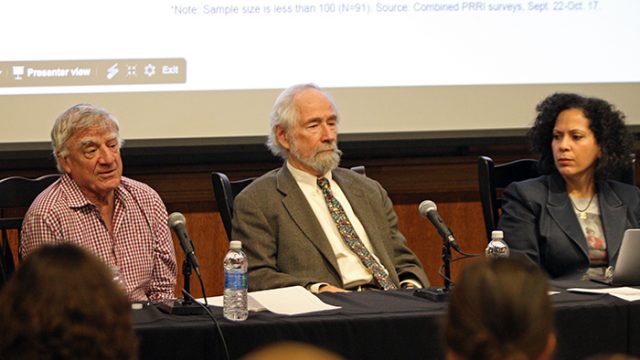 Professors Discuss the Role of Religion, Ethics in the 2016 Presidential Election

MT Davila, a professor at Andover Newton Theological School, recognized that because of people’s religious faiths, they have non-negotiable beliefs on certain issues such as abortion and gay marriage. She acknowledged that many faithful people vote for a candidate because they support a non-negotiable religious issue.

“It is equally important, however, that voters ask themselves if a candidate will allow them to contribute to the common good,” Davila said.

She remarked that these absolute rules of non-negotiable religious beliefs in politics do not present a full picture of what a person of faith is called to be in the public.

Davila began the discussion “Religion, Ethics, and the 2016 Presidential Election” sponsored by the Boisi Center for Religion and American Public Life, on Wednesday by asking her audience if there is an ethical candidate and an ethically informed electorate in the 2016 presidential election.

She noted that the presidential candidates have ignored the critical issues of alleviating poverty and saving the environment. According to Davila, they have also ignored the protests at Standing Rock in North Dakota and the Black Lives Matter movement throughout the United States, even though these social movements are designed to lift up the plight of the marginalized. People of faith, therefore, have a responsibility to step up and talk about it, Davila said.

In addition, neither candidate has spoken about individual persons and their struggles, which was an important aspect of past election cycles.

“Not hearing anyone’s personal name in election shows the extent to which both candidates are merely personality driven,” Davila said.

“Next Wednesday morning after the election, the issues in our country will still be the same. But my question to you is, how do we develop in the faithful the kinds of social virtues that help us better the world?”

Davila then gave the microphone to Landy, who promptly asked the audience two critical questions: How can religious conservatives support Donald Trump, and why is Hillary Clinton so unpopular?

In regard to Trump, Landy explained that Trump has religious conservatives’ support because he has the capacity to articulate and channel rage from people in a way that no other Republican candidate could.

“Trump is negative, and he is trying to make America great by moving America backward,” Landy said. “His show of strength is a mere show of rage.”

He also explained that Clinton’s unpopularity may be due to the fact that she is a woman. People are also skeptical of the federal government’s ability to solve the country’s problems.

Wolfe was the last professor to speak. He disagreed with Landy’s assertion that religious conservatives support Trump due to their strict religious beliefs. He agreed, however, that Clinton’s widespread popularity stems from her gender.

“I think it’s much harder to elect a woman than a black man, because there is a furious resistance on grounds to Hillary’s gender,” he said. “Even though people do not explicitly say it, she is hated because of the oddness at a woman being a president.”

Davila concluded the discussion by acknowledging that the faithful have a duty to better the world for the sake of the common good.

Even though the election of Barack Obama in 2008 was an important moment in American history, she said, Americans still faced poverty, terrorist threats, and homelessness. This will be the same for this year’s election.

“Next Wednesday morning after the election, the issues in our country will still be the same,” Davila said. “But my question to you is, how do we develop in the faithful the kinds of social virtues that help us better the world?” 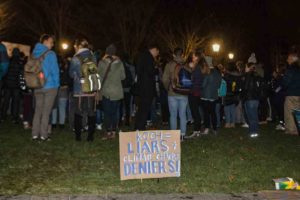