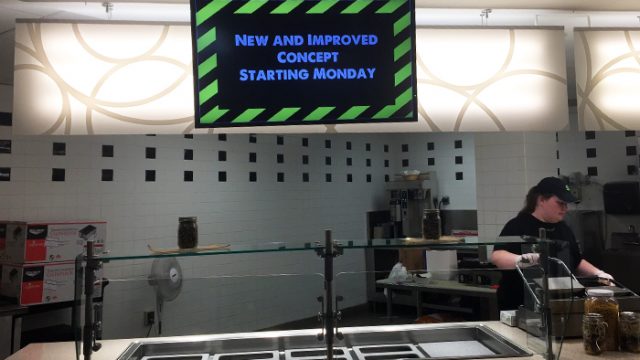 Boston College Dining Services is introducing a new station to Eagle’s Nest today called “Bowls,” where students can customize a grain and vegetable bowl. This will replace the harmony bowl station that has been at Eagle’s Nest since the beginning of the semester.

“[Harmony bowls are] not meeting everybody’s needs,” said Elizabeth Emery, director of Dining Services. “We are hoping this might bring some new customers to that line.”

BC Dining is also rebranding the stations in Eagle’s Nest by creating new signs and renaming them. For example, the “Green It” salad station will be called “Greens.”

BC Dining performed research and conducted surveys to determine what would best improve the harmony bowl station.

“We are very sensitive to people waiting in line,” said Michael Forcier, general manager of Dining in McElroy Commons. “If we had a perfect world, all of the concepts would have the same line. That wasn’t the case. Three of them were equal, but for the harmony bowls, the line wasn’t there.

Forcier and other members of the dining staff wanted to keep the bowl concept, but it also wanted to address student concerns. One of the concerns BC Dining heard was that students wanted to be able to pick exactly what was in their bowls instead of having to order from a set menu.

He thought that students would like the option of an animal protein to top their bowls, but the option of adding chicken to the top of the bowls, which was implemented a couple weeks earlier, did not change the popularity of the bowls. BC Dining realized that it needed to reinvent the station in order to attract and accommodate more students.

“We took the harmony bowl, which we think was a great concept, but added components to it that we think are going to make it more popular with our students.”

The “Bowls” station will have a three-step process. First, students can choose a protein base of either warm quinoa, warm brown rice, or sauteed kale.

Students can then pick up to three sides, including roasted cauliflower, roasted brussel sprouts, roasted sweet potatoes, roasted corn, or barbecue black beans. Finally, students can top the bowls with fire-roasted chicken breast or a scoop of warm macaroni and cheese and add  marinated carrots and a dressing.

“All the components have been tested and tasted,” Forcier said. “Now it’s just a matter of putting it all together and serving the bowls.”

Forcier hopes that warm brown rice or quinoa will be popular during the colder months.

“We took the harmony bowl, which we think was a great concept, but added components to it that we think are going to make it more popular with our students,” he said.

Dining staff at the specialty sandwiches station have begun preparing tuscan chicken sandwiches ahead of time to meet demand.

Forcier said that the sandwich accounts for 80 percent of all sandwich sales from that station.

To improve the efficiency of the line, dining staff now prepares 100 tuscan chicken sandwiches just before Eagle’s Nest opens and places them in to-go containers.

The number of sandwiches sold has remained the same, but the the wait time for a sandwich has significantly decreased, according to Forcier.

BC Dining hopes the “Bowls” station will attract a new crowd of students and will help balance overwhelming lines in Eagle’s Nest.

“We all want this bowl concept to be successful,” Emery said. “But, we need the student feedback to know.”