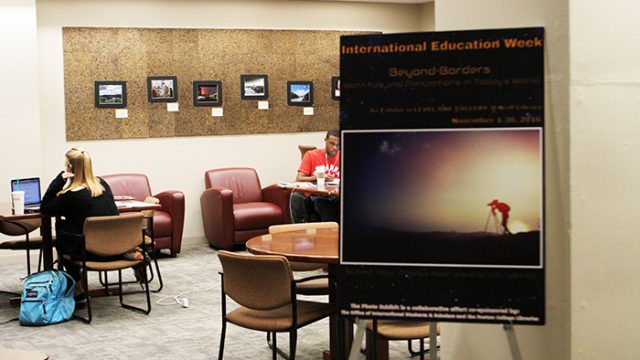 Beyond Borders: Identities and Perceptions in Today’s World is a compilation of international photographs taken and submitted by members of the Boston College community. The cohesive collection of distinctly different photographs that come together to create one united celebration of cultural diversity in the Level One Gallery of O’Neill Library. Featured from Nov. 1 through Nov. 30,  this exhibit is being showcased by the Office of International Students & Scholars and the BC Libraries.

The collection includes 25 photographs that all provide unique and fascinating insights into global identity and international culture. Some pieces are more straightforward than others, simply celebrating certain buildings or cities, while others delve deeper into political and emotional aspects of each foreign lifestyle.

The first photograph, entitled Beginning by Chunhui Li is a wistful image of a woman staring at the camera. Awash with late-evening glow, she peers from behind her hair across her face.

“This photo was taken after a tough workday in the village […] Her tired face in this evening is so attractive for me,” Li describes in her caption.

, Vibrant with brilliant colors, Tibetan flags, mountains, and clouds, Shangri-La by Jinting Fu provides a scenic view that serves as a dreamy escape from urban landscape.

“The photo was taken in May 2014 in Yading, Sichuan Province, China. The place is also known as Shangri-La described by James Hilton in his novel, Lost Horizon,” Fu writes.

The beauty of the picture serves as a testament to the inspiration the area has become.

Much like Shangri-La, Erik Eppig’s photo, Revolution Redux, uses a wide array of colors to illustrate a picture of distinct beauty. Where Fu’s photo dwells in pure happiness, however, Eppig captures of scene of contrast.

The pattern of introspection continues with Yi Zhao’s Fruit, Drinks, Ghanaian Girls. The juxtaposition of hostility and approachability define the theme of this photograph. “Every time our shuttle stopped, there would be groups of young boys and girls gathering around with fruits and drinks on their heads. People there made a living by sell [sic] local products to the travelers.” This insight into a different culture and custom is the perfect example of this exhibit’s theme.

Featured photographer Jae Berry’s experience attending the Tongdo Monastic College in South Korea was defined by his work in the rice kitchen. His photo entitled Rice Kitchen, although taken in black and white, gives off an intense energy. It’s as though you can feel the heat emanating from hearth, and smell the rice crust scorching in the pots. The wispy waves of smoke fight for space among the pots and pans in the hectic environment.

This kind of palpable energy can also be found in Sarah Gross’s Moshav Modiin Art Fair. Capturing the Moshav Modiin Fair in Israel, this image is alive with bright lights and a technicolor crowd. The widespread conversations and interaction among the people gives the picture an inherent buzz.

Old & New by Emily Sosrodjojo gives a sneak peek into a living room depicting the knick knacks, CDs, television screens, and photographs that adorn the shelves.

“This is a picture of a glass showcase from my grandparents’ house (Indonesia) that is filled with gems from my dad’s childhood,” Sosrodjojo writes. “It contains the roots of my identity.”

It is in this description that the message of the exhibit is driven home: the need to see, and honor, the variety of identities.

beyond borders
JR Aquino Awes ‘From Mind to Mic’ Crowd, Discusses Asian-Americans’ Presence in U.S. Entertainment
ACC Competition Is the Least of BC Secondary’s Issues