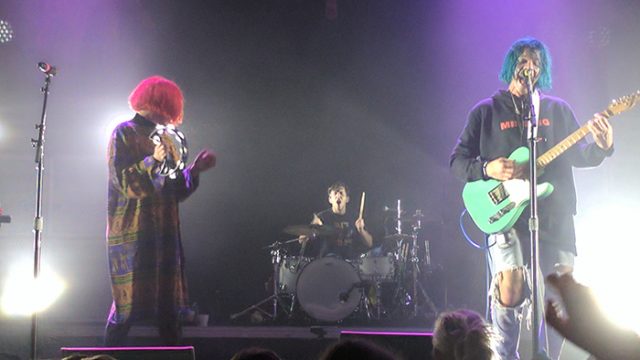 Often a concert is merely a display of a band’s ability to perform live: to prove that its commercial success is more than just studio wizardry. Rarely does a band come on stage and deliver more. Grouplove, however, did just that on Thursday night.

Having never been to the House of Blues, experiencing the two-block long line and aggressive security were nothing less than an annoyance. Getting onto the general admission floor made all of that angst go away. Unlike many other concerts in the Boston area, this one was filled primarily with college-age millennials, all of whom seemingly could not wait for Grouplove to take the stage. Before they would perform, however, two openers played. The first two acts of the night: Dilly Dally and MUNA.

Often openers can thrive in their unpopularity, relative to the main act. Dilly Dally, who played first on Thursday night, certainly was going for gold, performing with confidence not reminiscent of a band whose top song just recently breached 1 million plays on Spotify. While Dilly Dally was ready to embrace the crowd, the crowd wasn’t so eager to return the favor. The band’s lead singer loosely clutched her guitar while belting out high-pitched, perhaps randomly-timed screams. This was not the upbeat, alt-pop the crowd paid for—this was hardcore grunge. While some concert-goers embraced the commotion, others were put off by the hectic set. The band seemed an odd choice of opener for such a cheery main act.

For those who didn’t love the heavy grunge exuded by Dilly Dally, MUNA was a refreshing relief. While not necessarily upbeat, MUNA’s clean and modern sound elevated the overall feel of the crowd. Electronic beats harmoniously fused with strong instrumentals and vocals made for a pleasurable experience. MUNA’s experience on the stage shone through as well. Coming to the end of its final song, every member of the band formed into a line on the stage, and they jumped synchronously with each other to the beat. The crowd responded well to the band, but was still restrained in its anticipation of Grouplove.

The intermission between MUNA and Grouplove seemed to take forever. Just as the band was about to perform, “Come Together” by The Beatles played through the venue’s speakers. The crowd belted the song to the very end, when the lights went black and the crowd exploded.

Having last seen Grouplove in Dec. 2013 at The Rave Club in Milwaukee, it was immediately apparent that the band was more mature, not only in its musical portfolio but even more generally in its overall stage presence. While Grouplove released a new album this year, its stage composure truly shone through on its most popular songs from older albums. Most notably, “Colours” and “Shark Attack” energized and engaged the audience in a way that few other bands could. There was not a soul on the floor who wasn’t dancing, and the band members added to the excitement by repeatedly throwing themselves into the crowd.

The title of Grouplove’s most recent album, “Big Mess,” encapsulates the philosophy of the band. It is exciting and unpredictable. In the middle of the set, the stage lights changed from green and blue to red, and the lead guitarist, Christian Zucconi, laid down a familiar guitar track: Grouplove was playing the Beastie Boys’ “Sabotage.” The crowd did a double take, and followed suit, the entire crowd turning into a huge mosh pit.

At the end of the Grouplove concert in 2013, the young band came back on stage, bowed to the crowd, and used a GoPro to film the crowd and concert venue before finally leaving the stage. Though the crowd loved the gesture at the time, it was nonetheless a sign of a younger, less-experienced band, still wide-eyed at the sight of a boisterous crowd. At the end of the concert on Thursday, instead of personally filming the crowd, Zucconi honored his father, who sat in the upper mezzanine seats of the venue. Grouplove had made it. 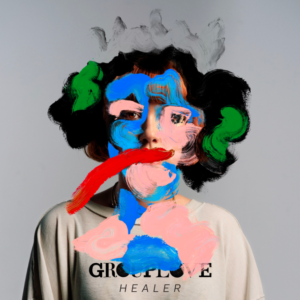