Home » With ‘Darkroom,’ Anyone Can Monetize Their Instagram Obsession 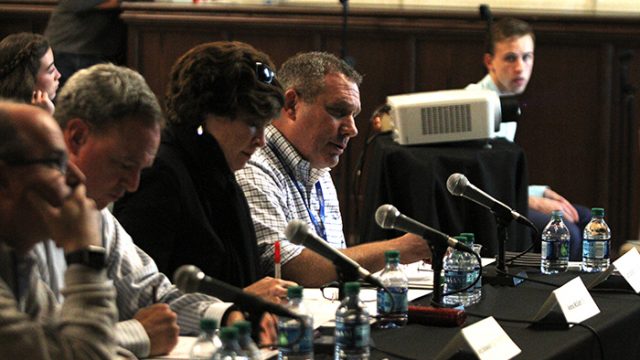 Have you ever wanted to sell a print from Instagram without any cost or risk? At this year’s most recent 2016 Elevator Pitch competition, the judges and audience felt that the solution, a platform by the name of “Darkroom,” had the potential to satisfy this urge. It took just a 60-second pitch to convince these judges, a panel of entrepreneurs and professionals with experience in entrepreneurship, that Darkroom could really work.

Darkroom is a web-based platform designed so anyone can sell his or her prints in a similar way to an elite photographer,

Darkroom was envisioned by Theodore Chapman, CSOM ’17, who came from Minnesota to Boston College thinking he would study economics and finance and move into the banking world after college. After some PULSE-initiated meditation, however, Chapman realized his true passion didn’t lie in banking, but instead in entrepreneurship.

Chapman took his drive for creation to one of his favorite social media apps: Instagram. He saw a problem with how many photographers were using Instagram as a portfolio for their work but couldn’t distinguish themselves from other users, and couldn’t find others who used the app in a similar way. Chapman found a solution to this problem in pstcrd, which he pitched at the Boston College Venture Competition.

“Pstcrd was a discovery and exposure platform for Instagram,” Chapman said of his early idea. “I built out a pretty big network of photographers that were using Instagram as their ‘portfolio’ of sorts, and that’s where I discovered this common pain-point amongst them.”

The thing that connected them all was their desire to monetize their passion–one of the most common ways they try to make money is through selling prints, yet often they lack the resources and money, or simply can’t figure out the best avenue for it. At some point last spring as the pstcrd project was winding down, Chapman explained, a daydream about this problem during class yielded the new Darkroom business model.

Chapman talked through the idea of Darkroom with a variety of people over the summer, but it wasn’t until he pitched the idea to his roommate Anders Bill, MCAS ‘17, that he realized the possibilities of the project. Bill used the idea for his semester-long project in his Entrepreneurial Marketing class, and carrying on that momentum, Chapman has made a team with Bill and three of his classmates to create the startup platform.

Chapman had previously competed in the BC Venture Capitalist Competition as well as the Start @ Shea Accelerator using pstcrd, so the Elevator Pitch competition was the natural progression to test the reception of Darkroom.

“Prep for the competition was Anders and myself refining the 60-second pitch,” Chapman said. “Trying to figure out what the most concise way was to describe both the problem and solution for the judges and audience in such a short time period.”

Though it was a short period of time, the judges and audience at the competition found Chapman’s idea worthy of both the Best Overall Pitch and Crowd Favorite awards. With the win, Darkroom was presented $500 to expand the company. Chapman plans to use the money in developing a web app once enough data has been collected from the beta version that is being tested at BC.

“The best-case scenario is absolutely to turn Darkroom into a viable business that I can continue to work on throughout the school year and beyond,” Chapman said.