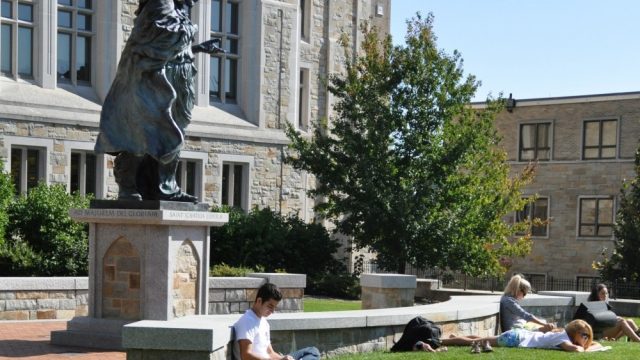 There is something very dangerous about a person who cannot tolerate other people, a person who believes that he or she has the correct view of the world, and seeks to marginalize anyone who disagrees with that view by calling them rude names or slandering their characters. There is something horrific when people use media outlets to further their bigoted ideas. Even more so when respected persons in the media espouse such bigoted ideas. These people want to be able to decide how events should be interpreted and how to react to them for you. They self-anoint themselves as the moral arbiters of society and judge everyone from their very narrow points of view. These people have become more and more common on campuses across the country, and it is sad to say, but the time to stand up against them may have past. It may be too late to confront the bigotry that has sprung up in front of our very eyes, and that is held by some of our most beloved celebrities and institutions.

Of course, I am talking of liberal bigotry. This new, self-appointed group has decided to give itself the responsibility of deciding for the rest of the country how it should be run. It has appointed itself by discriminating between people who hold the “correct” views or people it will call “bigots” and “racists.” This column is an expression of something that I have begun to notice more and more. I believe that many others who read this will, if they think back on their experiences, agree that liberals rule on college campuses. The “self-appointed” liberal does not see the hypocrisy when he chooses what is and is not correct for other people, but will stop at nothing if someone expresses a view he does not like.

For example, abortion is seen as a pretty divisive topic. Anyone who disagrees with the liberal position of pro-choice is immediately branded as sexist, fundamentalist, or misogynistic, however. Rarely does anyone in the popular media give voice to the other side’s opinion. The “self-appointed” has decided for the rest of society that if you are not pro-choice, you must be a fundamentalist, or someone who does not care for women’s rights. It is even worse when it comes to today’s hot topic, the transgender movement. The “self-appointed” has concluded that his views are the correct views and anyone voicing any contrary view must be a bigot. Why? The logic of the “self-appointed” is that because he views himself as the group that stands up for people’s rights, or fights for equality, that he must therefore hold the correct views. He cannot fathom that other people might have genuine reason for opposing some of the liberal views that have nothing to do with race or gender. The “self-appointed” celebrates his views as tolerant and loving, but seeks to silence any opposing view. I ask you, the reader, if you have not had similar experiences with liberals who view themselves as “morally superior” because they have decided what is good, and if anyone that does not line up behind their views is automatically castigated as an enemy to progress. The “self-appointed” deem them racist, sexist, or extremist without ever engaging in conversation with the opposing side. The liberal constantly wants to have a “dialogue,” but will immediately use derogatory terms whenever the other side says something they do not like.

This is what liberals today do on college campuses all across the country. They oppress the voices of those that speak against them while at the same time claiming that those voices against them are oppressing them. I have seen liberals on TV programs like Full Frontal with Samantha Bee or The Late Show with Stephen Colbert use language that would cause outrage if a conservative had used it. This is because the “self-appointed” wants to decide what is correct and appropriate, and subsequently wants to have the power to silence anyone who does not agree. We must try to free ourselves from this by simply not taking part in the bigotry and hypocrisy. We must assume that any side is correct whenever we first engage in dialogue. We must be more critical whenever people claim to be offended, and especially when people use the “offense” card to silence someone else. We must actually engage sincerely with all sides.