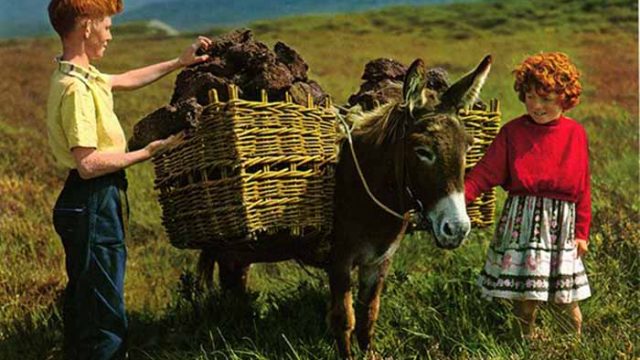 And then, because he deemed it less than perfect, Hinde altered the image entirely.

By applying a concoction of chemicals and drastically manipulating the original image’s coloration, exposure, and saturation with a series of complex editing strategies, Hinde created what he believed was a beautified representation of an idyllic—and endearingly exotic—Irish landscape. The iconic photo, which pictured an amped-up, whimsical depiction of everyday life in rural Ireland, features electric blue skies, lush green hills, a kindly miniature donkey, and two young children whose curly red hair seem to radiate the kind of energy and vitality that Hinde hoped to symbolically convey about Ireland through his highly edited photographs.

Presumably, at some point in the process of transforming his original image, Hinde probably deemed the modified photo appealing enough, pat himself proudly on the back, and made a pretty penny by selling an artificial vision of Ireland to a postcard company.

Hinde’s brand of heavily edited photography catered to a rapidly growing demographic of the tourist type. Specifically, this wanderlust-loving group of his was composed predominantly of American people clinging wistfully to a carefully contrived perception of Ireland. His postcards glorify Ireland’s beaches, illustrate the potential for picnics with majestic mountain views, and advertised carefree citizens dwarfed by the country’s mammoth, green-colored cliffs.

The nation was publicized as both an unrivaled rural paradise—a blissful escape to a simpler lifestyle—as well as a hub of urban activity in the densely populated parts of the country. Hinde’s dramatic manipulation of Ireland’s natural colors did much to control the positive global perception of a less-than-perfect Ireland. He made it brighter and more likeable. He sacrificed realism and instead strived for his own, cherry-picked brand of perfection.

Hinde sought to sell a fabricated façade of Ireland—to turn a profit on perfection.

Americans ate it up.

Personally, I think Hinde’s revered work is best equated to a sugar-sweet Carly Rae Jepsen track. It’s nauseatingly bright, feels eerily fake, and you just have a hunch that cheap elements like auto-tune or poppy synths have been haphazardly thrown at the thing. I imagine Hinde’s experimental darkroom to have been just like a modern music chopshop—a studio capable of rendering original content poked, prodded, and edited beyond recognition so as to evoke a positive response from the masses.

Simply stated, it’s a glossy and exaggerated veneer that distracts from the natural, untouched state of things. He relies on a tactic of persuasion, while opting to omit the honest expression of the way things really are.

If a scene looked better with pink flowers, Hinde would see to it that a few brightly colored branches from a few miles away were cut down and staged exactly where he deemed necessary. He’d manipulate the land so that it looked how he wanted, not how nature intended. He worked tirelessly to create an Ireland that would seduce an audience.

I think this state of mind is horrifically misguided.

Such an artistic decision perpetuates a fabricated fantasy world, removing entirely the opportunity to appreciate the beauty of an untouched image. This beauty, I think, includes the potential to recognize imperfections in a picture—to acknowledge their presence, and look for a way to improve or avoid or surmount ’em next time if necessary.

While I realize Hinde’s edit-happy artistry was all in the name of good advertising, I wonder why he wasn’t satisfied with the natural order of things. Did he ever appreciate the breathtaking beauty of a candid moment in time? Had he always seen the natural world as a thing he had to manipulate?

But if “all the world’s a stage,” as I assume Hinde and Shakespeare would be willing to bet,  then what does that make us? Merely players?

john hinde
Lost in ‘La La Land’
All That Jazz: The History and Evolution of BC bOp!