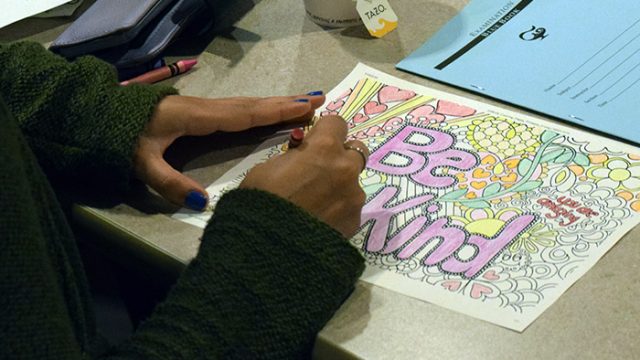 Thick gray clouds loomed over Boston College Wednesday morning as students walked to class. Some students stopped to hug friends and exchange brief words of empathy and support, but most walked in silence.

The somber mood on campus followed the announcement early Wednesday morning that Republican nominee Donald J. Trump won the 2016 presidential election. Trump secured 279 electoral votes to Democratic nominee Hillary Clinton’s 228, as of late Wednesday night. The results shocked BC students and the rest of the nation. Most of the polls leading up to Nov. 8 predicted Clinton would win by a large margin.

Following the announcement, several professors cancelled classes. Many more students didn’t attend classes on Wednesday. Professors who did hold class invited students to engage in conversation about the election rather than discuss the day’s material. Most of these conversations elicited tears of disappointment, fear, and concern.

Resident directors also sent emails to their residents, inviting them to come talk with them. The emails also encouraged students seeking help to visit the Office of the Dean of Students, the Thea Bowman AHANA and Intercultural Center, and University Counseling Services.

The Women’s Center, which has office hours Monday through Friday from 10 a.m. to 4 p.m., welcomed students throughout the day Wednesday who were in search of a place to talk about and reflect on the results of the election.

Katie Dalton, the director of the Women’s Center, said that she invited students to the center on Wednesday for food and discussion because she knew students would have a strong reaction to the results of the election.

Dalton had expected the Center to host a day of celebration after Clinton was elected the first female president of the United States. But after the unexpected win by Trump, feelings on Wednesday were not that of celebration.

“The overall tone is a tone of disbelief, a tone of anger, and a tone of anxiety,” she said. “I think we can all make assumptions about what we think a Trump presidency will look like, but we don’t really know. I think that unknown comes with a lot of anxiety.”

Even though Clinton’s loss meant that the Center would no longer be holding a day of celebration, Dalton still welcomed students into the office.

“As Clinton said, ‘We’re stronger together,’ so I emailed my staff and asked if we could get together and start to grapple with these results and be there for each other,” she said.

When the office opened around 10 a.m. Wednesday morning, the first students to arrive were graduate students. They were very quiet, Dalton said, and no one spoke because no one knew what to say. But as more undergraduates came to the office, the conversation picked up. Students spoke in small groups and watched the various speeches aired Wednesday morning, including one by Clinton and one by President Barack Obama.

Dalton understands that not all students on BC’s campus have the same political views. She wanted to bring students together so that they might come to terms with the results of the election and then learn how to talk with roommates and friends who have differing political stances.

“This isn’t a time where we just cut that off and create new friendships or form new rooming situations,” she said. “We really need to be able to mourn ourselves so that we’re in a place where we can come together.”

Dalton noted that not all BC students voted for or supported Clinton.

“The best part of our country is that we can vote and we have the free will to be able to do that, so we also need to be able to recognize that not all students are feeling the same way,” she said. “And how do they feel being in spaces where perhaps they can’t identify as Trump supporters?”

The Women’s Center will continue to hold its normal office hours throughout the week with the understanding that students will want to come in to talk about their reactions to the election.

Caroline Davis, assistant dean for student outreach and support in the Office of the Dean of Students, held an open house for students in the conference room in the office Wednesday afternoon. She initially invited members of the LGBTQ community to engage in dialogue but welcomed all BC students and faculty. She hoped to give students a place to talk about their reactions to the elections.

“It’s more about affirming that students have a safe space on campus to talk about whatever they need to talk about,” Davis said.

Students and faculty talked among each other in small groups. Some students in the room had tears in their eyes.

Jupiter Yao, a third-year student studying abroad from Peking University, said he would have voted for Clinton if he had the right to vote. He believes that Trump won because he is not part of the political elite, and he was more honest and candid during the campaign. He does not see Trump’s win as troubling.

He does see that students are upset with the results. But no matter who you voted for or who you wanted to win, he said, Americans should still be thankful for their right to choose their leader.

“You still have a very good, solid, strong democracy,” he said.

Cora Ives, MCAS ’17, had a different point of view on the election. She was disappointed in Americans and unimpressed with the new president of the U.S.

“Do you already have ‘disgusting?’” she asked in reference to other BC students’ reactions to Trump winning the election.

Many students at the LGBTQ open house on Wednesday did not want to comment on their feelings on the results of the election.

In order to support continued conversation on the elections, Davis said she will host support groups and other programmings, which she already hosts each week, throughout the week.

The Undergraduate Government of Boston College will also hold events throughout the week. On Wednesday night, the Diversity and Inclusion Programming Board of UGBC held a “Recovery and Processing” event to provide a space for students to take a step back and reflect on what a Trump win means for the country.

Students of all backgrounds came together in Higgins 310 to meditate, color, sip tea, and vent. Ives, president of the Buddhist club at BC, held a group meditation for students. Then, Collin Pratt, the director of Diversity and Inclusion and MCAS ’17, led a group examen for students to think deeply about what affects them in today’s political age.

Pratt said it was important for students to have a safe space on campus to express their feelings. By meditating, Pratt hoped students would become grounded in the present.

Before leaving, students were asked to write down affirmations and swap them with each other to confirm each other’s importance in society, regardless of the election results.

Throughout Trump’s campaign, the president-elect made derogatory statements toward people of color, Muslims, and women. Pratt felt it was necessary for Diversity and Inclusion, a group on campus dedicated to representing marginalized groups, to have a space for students to share their frustrations.

“I think to see him win has a lot of people in very dire straits about the future of this country and their livelihood within it,” Pratt said.

Pratt said that his conversations with students have ranged from angry to disgust to shock. He stressed, however, that the work that college students are doing is vital for future elections.

“We have the ability to speak on the national stage,” Pratt said. “This election showed that we had the responsibility to step up and speak out and we didn’t do that. It was really to the detriment of the rest of the country.”

The BC Eagle Political Society (EPS) held a discussion Wednesday evening at 7 p.m. in Stokes 103N. Like so many other events, it aimed to provide students with a space to talk about their reactions to the election. There were 10 students in attendance, all of whom were members of EPS. The students discussed Trump’s plans for his first 100 days in office and forecasted which of Trump’s policies would pass the House of Representatives and the Senate.

“Really, we are just trying to help each other see a way forward for the country,” Nathan Dahlen, member of EPS and MCAS ’17, said.

UGBC will host an open house Thursday from 11:30 a.m. to 1:30 p.m. in its offices in Carney. The event is open to all students who want to share their thoughts with one another about the election, Meredith McCaffrey, UGBC executive vice president and MCAS ’17, said.

Matt Sanborn, co-president of the BC Democrats and MCAS ‘17, does not believe that Trump can accomplish all that he claims he can as president. When the American people realize Trump’s inabilities, he said, the Democrats will welcome them with open arms.

Although Clinton did not win the election, he said, the Democrats will continue to work toward achieving their goals.

“The country may have elected the most sinister man to ever run for president, but Democrats are the ultimate winners,” Sanborn said. “Progressivism faces an uphill battle, but we’ve always known this. Tonight’s results just mean working harder than ever before these next few years to realize our goals.”

Mariella Rutigliano, president of the College Republicans and MCAS ‘17, said that Trump’s election shows the country’s desire to remove the political elite and return to a smaller, transparent, and accountable government.

“The people have spoken and this election is proof that our democracy is alive and well,” Rutigliano said. “What we saw unfold tonight was unpredicted and unthinkable. This victory proves that Trump’s message and appeal was grossly underestimated throughout his campaign.”

3 COMMENTS ON THIS POST To “Following Trump Victory, a Somber Mood on Campus”