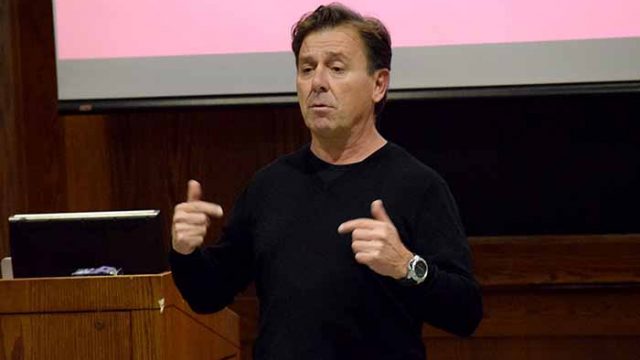 The Carroll School of Management marketing department welcomed Javier Sánchez Lamelas, the founder and CEO of Top Line Marketing, to speak to students in Fulton Hall as part of the Distinguished Marketing Lecture Series on Monday afternoon.

Top Line Marketing is a marketing consulting firm that has worked with companies like Coca Cola, P&G, and Motorola. Prior to working at Top Line, Lamelas worked at Procter & Gamble and was the global marketing executive officer at Coca Cola from 2003 through 2007. He also recently published his first book, Marketing: The Heart and Brain of Branding.

Originally, Lamelas was on track to be a lawyer, following in the footsteps of his father, who was a judge. But after a year of law school, he discovered that his true passion was working in marketing.

Lamelas began his talk on Monday by taking questions from the audience. The questions surrounded both his career and his personal life. He explained how growing up in Equatorial Guinea and living throughout Europe, including Vienna, Athens, and Brussels, and in the United States helped to give him a better perspective in his work.

Lamelas then went on to talk about the basis behind his six-month campaign entitled “Choose Happiness” that he designed while working at Coca Cola. Lamelas believes that happiness is the aim of every human life. Throughout the creative process, Lamelas and his team asked different sources, including anthropologists and the Dalai Lama, what they thought happiness was.  Lamelas came to the conclusion that “the purpose of our lives is to maximize net present happiness.”

Lamelas went on to further explain the concept.

“Happiness is not about ‘luck.’ It does not happen by chance. Happiness is about hard work. It is a choice.”

“Happiness is not about ‘luck,’” Lamelas said. “It does not happen by chance. Happiness is about hard work. It is a choice.”

Lamelas said that happiness is not the same thing as optimism and that seeing the glass half full does not mean that an individual is happy. Instead, the individual must take the necessary steps to “fill the glass” to be happy.

Once Lamelas determined the basis of the campaign, he came up with seven principles to live by that stemmed from the idea of choosing happiness. Lamelas imparted his wisdom on the audience: the future is up to you, get to know yourself, goals are important, love is like a bucket, be principled, do something good, and happiness can be taught.

Lamelas stressed that goals are important. Without goals, an individual can not create a plan  to achieve happiness.

He then described how being principled has helped him find happiness in his life. Because Lamelas has been uncompromising with his values, he has found the most success.

While explaining the different convictions, Lamelas showed students a few different Coca Cola commercials that were based on those themes. Each commercial featured individuals making active choices that brought them joy and happiness, all while drinking Coke. One of the commercials he presented was based on the “do something good” conviction and showed people doing small, good deeds, and also drinking Coke.

Lamela’s intent was to show students a strong marketing campaign, but also how to live a successful and happy life.

“I wouldn’t have changed anything I’ve done with my life,” he said.