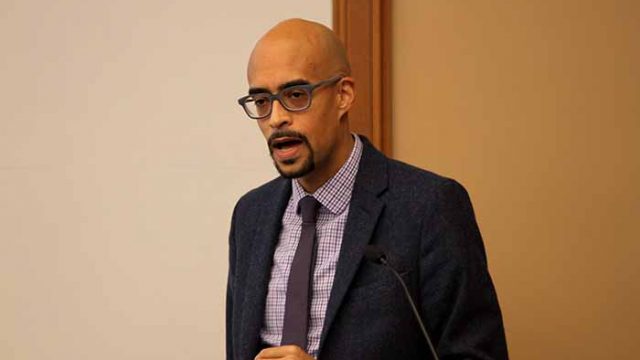 In today’s political and social scene, issues such as police violence, systemic racism, and black identity are often at the forefront of social discussion. Joshua B. Guild, a professor of history and African-American studies at Princeton University, examined both the roots of these issues and specific examples of post-World War II racial violence in New York and London in a presentation Wednesday in Devlin Hall.

At the lecture and discussion titled “‘This Could Be You:’ Confronting the Specter of Racial Violence in Postwar New York and London,” Guild explored myriad murders and assaults of blacks perpetrated by police and extra-legal elements, like the Ku Klux Klan and other local gang organizations.

At the beginning of the lecture, Guild introduced several texts on black identity and resistance.

“I want to talk about the ways anti-black violence reared its head in New York and London, and how black communities responded,” Guild said.

Guild’s lecture moved through the racial dimensions and implications of these episodes of violence against blacks and the commonalities between them. For each episode, there was a clear and direct impact on the black community. In New York, where George Waddell was murdered, local members of the black community and prominent black lawyers and religious leaders came together to promote black solidarity. In London, the murder of Kelso Cochrane, an Antiguan immigrant, led to discussion on the relationship between blacks within the British Empire and the British homeland.

“I want to talk about the ways anti-black violence reared its head in New York and London, and how black communities responded.”

-Joshua B. Guild, a professor of history and African-American studies at Princeton University

The responses to Waddell’s and Cochrane’s murders were strikingly similar. Both killings resulted in strong outrage from local black communities, followed by intense periods of racial tension and conflict. These periods of racial instability often brought social progress, however.

Guild maintains that while the events themselves are horrible, the impacts of these murders are factors that serve to unite British and American blacks against anti-black violence and racism. By regarding these slain black men as “martyrs” of black communities, they were hoisted up as symbols of both black identity and black resistance in their communities. Through the creation of a resistance symbol to rally behind, the black communities of New York and London experienced the first inklings of a strong black identity.

“Black consolidation becomes even stronger ten to 15 years hence,” Guild said about the decades after the post-war period.