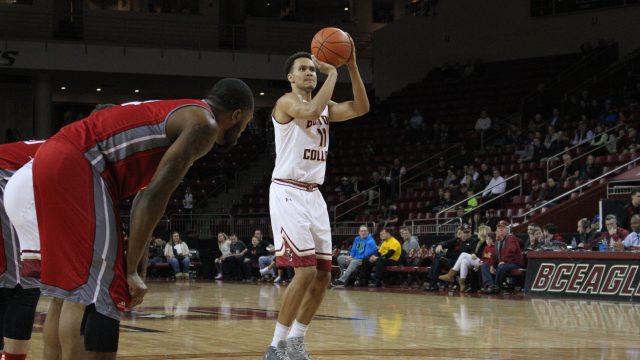 You might think the timeout was because the Eagles were running up the score, and that the fans were loud because somebody had just executed a perfect dunk. It’s a reasonable thought. After all, BC plays in the most competitive basketball conference in the country, and Nicholls State does not. Furthermore, coaches and sports information directors predicted that Nicholls State would finish in last place in the Southland Conference. Heading into the game, all bets were on the Eagles to win by a wide margin and start the 2016-17 season with a statement.

You’d be wrong, though. BC was not winning. It had not been winning all game. In fact, with four minutes to go, the Eagles had just cut the Colonels’ lead to one. Despite being the better team on paper, BC was down 66-65. And although the Eagles managed to tie it up at 69-69, Nicholls State pulled ahead and padded its lead in the final seconds, finishing with a 79-73 victory.

The game was not what BC (0-1) wanted or expected to start off the season. The Eagles allowed the Colonels (1-0) to jump out to a 12-0 lead early in the game and never recovered.

“We practiced well, we practiced hard,” head coach Jim Christian said after the game. “And then tonight, for the first 10 minutes of the game, we probably didn’t do one thing we practiced.”

They cut the lead to eight or six multiple times throughout the second half, but for the most part just couldn’t come any closer to chasing the lead. Here are some observations from the game.

Fans of BC athletics are probably pretty accustomed to hearing excuses like “It’s a young team.” Most of the time, that doesn’t really apply. But here, there is something to be said for the experience of the starters on both squads.

The Colonels returned all five of their starters from last season. Ja’Dante’ Frye is a redshirt senior, while Liam Thomas, Johnathan Bell, Adam Ward, and Luka Kamber are all seniors. This lineup has a lot of experience playing together. Frye finished with 11 points and eight rebounds, while Thomas added four rebounds and 14 points. The player who torched BC the most was grad transfer DeAndre Harris, who finished with 28 points and seven rebounds. The point is, the squad that Nicholls State put on the floor for most of the game is experienced in the game and experienced playing together.

BC, meanwhile, started Ky Bowman, Jerome Robinson, Connar Tava, AJ Turner, and Mo Jeffers. Bowman, a true freshman, is the only player completely new to college basketball on the squad. Robinson and Turner both returned from last year, while Tava and Jeffers transferred to BC last year. It’s not that this lineup is inexperienced when it comes to basketball—it is undeniably inexperienced together.

The offensive output from the BC starters needs to improve heading into the season. Turner put up 12 points and Robinson contributed 14, but Bowman and Tava both scored only four points while Jeffers added six.

The only player to come off the bench and score more than eight points was another true freshman, Ty Graves—the leading scorer on the night, totaling 15 points.

After the game, Christian acknowledged the team’s relative inexperience, but refused to make excuses for his team’s performance.

“We’ve got to hold ourselves to a much higher standard,” he said.

Oh, man. If there’s one thing the Eagles absolutely must work on this week, it’s free throws. As the saying goes, they’re free for a reason—but the Eagles only managed to go 12-for-23 from the line.

In the end, although the Eagles trailed by as many as 15 points, they only lost by six points. BC missed 11 free throws. That’s the game right there. And it’s an even bigger gap than it looks, because several of the missed free throws were the front end of a 1-and-1.

Nicholls State was a little more accurate from the free throw line, but not by much. While the Eagles were 52.2 percent in that area, the Colonels were 56 percent after going 14-for-25 on the game. The Colonels also had more free-throw attempts toward the end of the game, when BC began fouling to stop the clock and put Nicholls State on the line.

In a game like this, a loss is incredibly frustrating for BC. It’s even more agonizing to know that the game could easily have gone the other way had the Eagles been more accurate from the free-throw line. Heading into the season, the ACC teams are going to be a lot tougher than Nicholls State. Even when the Eagles begin to adjust to actually facing opponents together, they must be more precise from the line or else it will hurt them time and time again.

Before the season started, I wrote that the Eagles needed to imitate VCU’s havoc defense in order to be successful and competitive this season. I came to the game expecting to see a hint of what might lie ahead for the Eagles. I wasn’t all that satisfied.

The game started out with a 12-0 run for Nicholls State. During that time, BC just looked bad. 10 of those points came from layups. BC needs to toughen up in the paint and put pressure on opponents to prevent these easy baskets.

Throughout the rest of the game, though, BC fluctuated on defense. The first half just looked bad. There wasn’t enough energy on the court, and the Eagles allowed the Colonels to build up a sizable lead. But in the second half, there were extremely promising stretches for BC. With 9:25 to go in the game, Nicholls State had 62 points. The Colonels only managed to score four points over the next four and a half minutes, thanks to tough pressure and great defense from the Eagles. And BC forced 10 turnovers from the Colonels. In the end, the game was one hell of a lot closer than the score may indicate—Nicholls State only won by six because it was put on the foul line so much at the very end.

The Colonels came out of the gate ready to apply pressure on the Eagles. BC should have imitated this strategy. Nicholls State instituted a full-court press and a tough zone defense that stifled the Eagles. BC committed 16 turnovers over the course of the game. Had the Eagles implemented a defense that was a little more similar to the Colonels’, they probably would’ve left Conte Forum tonight feeling a lot happier than they did.