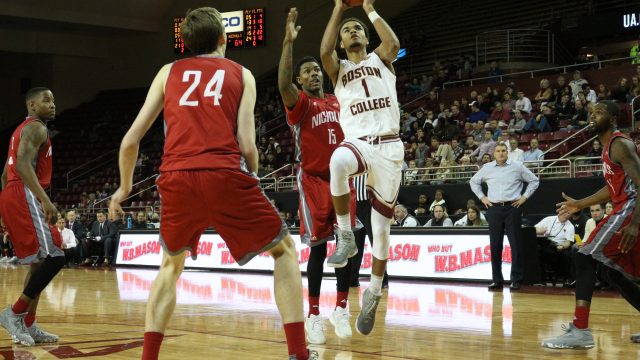 Head coach Jim Christian knew that his team wouldn’t go undefeated. He knew that with a young roster packed with raw talent, there would be losses and low points along the way—it’s a process, after all. What he didn’t know was that the first such slip-up would happen in Boston College’s home opener against Nicholls State, ranked 340th in the country by kenpom.com.

The Eagles were supposed to open their season with a win over the Colonels, a Southland Conference school accustomed to blowouts by Power Five programs. Instead of validating all the buzz surrounding the team, from the athletic guards to the prospect of a turnover-inducing pressure defense, Friday night’s 79-73 loss did the opposite.

Deandre Harris scorched the BC defense for 28 points on 10-for-20 shooting, leading the charge for a Nicholls State squad that opened the game on a 12-0 run. It took five minutes until a Jerome Robinson free throw put the Eagles on the scoreboard, and seven minutes until they registered their first made field goal.

BC looked lost on offense and overmatched on defense. After a sequence of turnovers and air balls, Christian had enough of his starting five. He plugged in Ty Graves and Jordan Chatman, who sparked the scoring effort.

Both new guards drilled two 3-pointers each in the first half as the Eagles hung around thanks to their long-range shooting. Jerome Robinson and A.J. Turner also added triples, cutting the deficit to single digits at the break.

The occasion seemed primed for a BC comeback against a weaker opponent in the second half. But every time Christian’s squad inched within six points, Nicholls State would respond with buckets to extend its lead again. Harris exposed an undersized frontcourt and scored 17 second-half points, including 7-of-9 shooting from the free throw line. A graduate guard who came off of the bench, Harris also ate up the Eagles on the boards, grabbing two offensive rebounds and totaling seven overall.

The Colonels also took advantage of BC’s inexperienced ball-handlers, implementing a full-court press and zone defense in the second half. Nicholls State registered eight steals and forced 16 turnovers—exactly what the Eagles were trying to avoid following their 16-turnover performance against Stonehill in last week’s exhibition game.

But once BC broke free of the Colonels’ pressure and settled into an offensive rhythm, the lineup began to chip away at the deficit. Robinson hit a pair of free throws, Turner drilled a 3-pointer, and then Robinson assisted Turner on a layup to make it 66-65. After a Jahvaughn Powell trey, Mo Jeffers and Robinson responded with back-to-back buckets. With 2:28 remaining, the game was tied at 69-69, and as sloppily as the Eagles had played, they had a legitimate chance of coming away with a victory.

But the last few minutes of the game were nearly as painful as the first few.

With the game on the line, BC coughed up the ball, failed to penetrate, and settled for lousy shots. The result was six straight Nicholls State points, a streak broken only by a Kyran Bowman layup with 20 seconds left. By then, it was too late.

“We just gotta stick with them,” Christian said of his young players. “You can’t get frustrated with it. We all gotta get better.”

Understandably, the 79-73 defeat threatens to shift the narrative of the 2016-17 Eagles from bright future to more of the same. But even in the loss, there were bright spots that suggest optimism isn’t completely futile, yet. Graves scored a team-high 15 points in his first real game, Chatman was an efficient animal off the bench, and Turner was perfect from downtown.

Robinson wasn’t at his best, but he found a way to make an impact from the charity stripe nonetheless. As a team, though, BC shot just 12-of-23 from the line.

On 11/11, the Eagles’ wish for a win symbolic of a changing program failed to be realized. The hype surrounding the lockdown defense wasn’t completely invalidated, but the young guards need to be disciplined enough to avoid committing the same turnovers they’re trying to force on the other end. With a 15-point disadvantage in points off of turnovers, BC was simply beat by its own model.