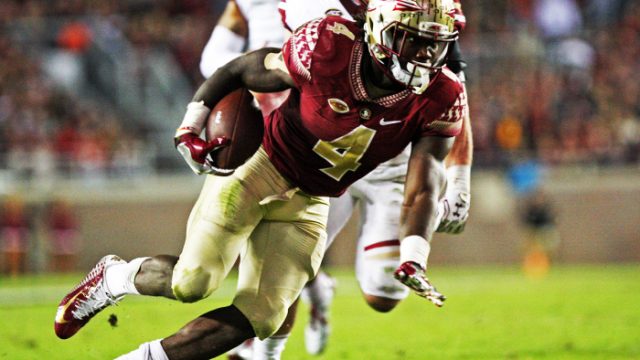 TALLAHASSEE, Fla. — The Boston College defense had a simple plan for No. 20 Florida State: Shut down Dalvin Cook and force Deondre Francois to beat them. It worked against North Carolina State. The Eagles held Matthew Dayes to under 50 yards and Ryan Finley struggled when the offense turned one-dimensional. This time, the opponents would be harder, but the goal would remain the same.

Florida State came in with a plan, too: Send pressure at Patrick Towles. Let him make the mistakes. And guard the run up the middle, because there’ll sure be a lot.

The Seminoles’ plan worked to perfection. The Eagles’ plan burned up in flames brighter than the fire atop Osceola’s staff.

With Marines flying in from above and emotional family reunions, the Seminoles put on a masterful show for the 73,000+ in attendance for Doak Campbell Stadium’s first Friday night game since 1957. But the real fireworks came from their on-field performance. With efficient performances from Cook and Francois, and complete and utter domination by the defense, the Seminoles kept rolling. And the Eagles, in a 45-7 loss to Florida State, keep floundering against the ACC’s best.

“When momentum doesn’t come naturally, we have a hard time pushing back against it,” head coach Steve Addazio said of his team’s performance in these blowout games.

Unlike previous games against Louisville, Virginia Tech, and Clemson, Florida State (7-3, 4-3 Atlantic Coast) didn’t use explosive plays to beat the Eagles (4-6, 1-6). Rather, the Seminoles began the game by having Francois mix in short and mid-range passes against the Eagles’ secondary. On FSU’s first drive, Francois hit four different receivers on six passes to get into the BC red zone. That set up Auden Tate, who pushed away from Lukas Denis, on a four-yard slant and a 7-0 lead.

That shouldn’t be a surprise. The Seminoles came in ranked 34th in yards per game, an improvement from last year’s 51st ranking. But on defense, Florida State has struggled comparatively. Despite expecting to have the top defense in the ACC this season, the Seminoles have been merely average. They rank 72nd in yards allowed per game with 411 entering Friday night after finishing 15th in that category last season.

So when Myles Willis bounced off the Florida State defensive line and reversed direction for a 39-yard run, the Eagles made it appear like they had an answer to a top-flight ACC defense.

Yet that run would be the last time BC had a first down until six minutes remaining in the fourth quarter.

A failed Jeff Smith sweep pushed the Eagles back six yards after Patrick Towles nearly threw an interception. Caught between the too close to punt, but too far for Mike Knoll to kick a field goal range, Addazio went for it—the right call, but an ultimately futile effort.

The wheels fell off following that drive. They bounced out of Doak Campbell, down Pensacola Drive, and into the Gulf of Mexico, never to return.

BC nearly stopped Francois and Cook on the ensuing drive, but a roughing the kicker penalty on Michael Walker gave the Seminoles new life. Francois exploited BC’s overzealous pass rush, bouncing off the edge to set up another red-zone chance. Francois then found Nymer Murray on a sliding catch in front of John Johnson, pushing the lead to 14-0. Addazio affirmed that his team prepared for those running plays by Francois, but just couldn’t execute.

“We had good calls,” Addazio said. “We didn’t set the edge well enough.”

After trading sacks and three-and-outs on a couple of drives, Cook came alive. Eyeing to break Warrick Dunn’s school record for career rushing yards, Cook danced into the end zone untouched from 19 yards out.

By the second half, the Eagles appeared cooked. Because of those long FSU drives and BC’s ineptitude on offense, the defense got stuck on the field for extended periods of time. That allowed Cook and the Florida State offense to, well, cook.

Before he left with a right shoulder contusion, Francois attacked through the air again by pump faking over the defensive line to hit Travis Rudolph. His injury allowed senior Sean Maguire, who lost his starting job to the redshirt freshman prior to the season, to play in his last game on the Panhandle. Surely the backup would make a difference for BC’s doggedly-tired defense.

But Maguire didn’t miss a beat, not one bit. He hit Tate for a six-yard score on another long drive to push the game to a five-touchdown lead. A failed punt by Mike Knoll gave FSU a short field, letting Ricky Aguayo hit a 53-yard field goal. Then Maguire went after the BC secondary again with a touchdown pass to Freddie Stevenson.

“We’ve got to move the ball better on offense,” Addazio. “We can’t leave the defense on the field that long.”

It wasn’t until then that Addazio waved the white flag. He replaced a struggling Towles with redshirt sophomore Darius Wade. Initially, Wade didn’t have a lot of success, but he orchestrated a late drive against the Seminole backups that allowed BC to save some semblance of face when Richard Wilson pounded home a one-yard touchdown run.

The damage has been done to the Eagles’ season, and to the reputation of the coaching staff. With the loss to Florida State, BC has been outscored by its top-four opponents by a whopping 202-24 margin. BC held those same four teams to a 91-41 difference last year. And Addazio offered a theory as to why BC has suffered in those big blowout games.

“We attract people’s best games, their best shots, because people respect the fact that our team is going to play hard,” Addazio said. “And we attracted their best shot here tonight.”

There’s no way to confirm that statement. But BC’s reality is this. The Eagles have lost four times by 30 or more points this season. That matches the amount of 30+ point losses the program had between 1999 and 2015. With two games remaining, BC must win both to guarantee a bowl game. This upcoming Saturday against Connecticut should be a gimme. The following week on the road against an already bowl eligible Wake Forest team will not, not even close.

“We’ve got to swallow this, and get over it to go out and beat UConn,” said defensive end Harold Landry, who had two sacks to make him the nation’s leader in the category with 11.

The Eagles know that this is their reality. Now they must accept it, move forward, and salvage something out of a year that has been full of misery. The whole BC community will be watching closely to see if Addazio and Co. can do it.