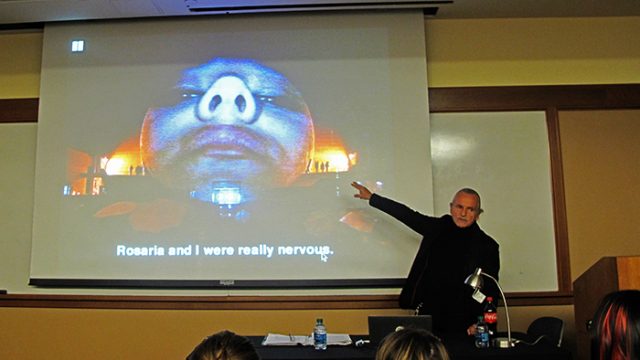 Immigration has been a hotly discussed political topic this year, especially with the divisive rhetoric of the 2016 presidential election. On Thursday night, artist and Harvard professor Krzysztof Wodiczko spoke to students about his work and how it relates to the topic of immigration.

Wodiczko began his talk by displaying a photograph of a non-white immigrant avoiding the glares of two natives on a train in Switzerland. He described how the photograph represents the discrimination immigrants face as a result of a person’s fear of their own differences.

“Why do they fear this person?” Wodiczko said. “Because his very presence invokes something that ought to be hidden: their own strangeness. The presence of this other person brings out all the repressed difference that they feel, so rather than confront this coming out, they would just deport this person.”

Throughout his career, Wodiczko has tried to address this misunderstanding and lack of communication between immigrants and native citizens in modern society. One of his practices, interrogative design, seeks to combine art and technology to draw attention to and solve cultural issues.

At the event, Wodiczko shared a video showcasing his Alien Staff project that took place in several cities across Europe during the early ’90s. The Alien Staff was a conglomerate walking stick that helped to tell the story of an immigrant.

The staff featured a small video monitor and speaker at its top, which would display a recording of the owner sharing his or her story and struggles as an immigrant. The middle portion of the staff was made up of a number of clear tubes, each one containing an important relic from the immigrant’s life, such as photos of his or her family or visa documents. The goal of the project was to prompt increased communication between members of the marginalized immigrant community and the general public.

“Once you are close to a stranger because of this object, it is too late not to start a conversation, and that’s the idea,” Wodiczko said. “The walking stick is unnecessary afterwards.”

In light of the results of the recent presidential election, Wodiczko believes that his and similar work may soon become imperative.

“It’s quite possible that, if [the] president-elect was actually to follow his own speeches in relation to immigrants, perhaps we, as artists, especially those who work with media and public space, will have to do something,” Wodiczko said. “To bring more understanding and connection between those who are strangers and those who claim to be non-strangers.”

Wodiczko is most famous for his large-scale projections that turn building façades, statues, and memorials into canvases. He animates these surfaces with images of either live or prerecorded video and sound to bring social issues to the forefront of public discourse.

“Buildings are silent faces,” he said. “They see with their blind eyes and they hear with their deaf ears what is happening around them, and they cannot say anything.”

Wodiczko believes buildings are suffering a sort of post-traumatic condition. Those who might suggest the possibility to speak through monuments are monuments to their own trauma themselves, he said. He believes these people are silent monuments to what they live through.

In 2001, he carried out a projection project in the Centro Cultural in Tijuana, Mexico, a border city dominated by factories called “maquiladoras,” in which North American corporations utilize cheap Mexican labor. Women in Tijuana are often discriminated against, mistreated, and abused in the workplace and by police, and Wodiczko sought to create a way for women to speak out against this injustice.

He designed a helmet with a video camera and a microphone that projected the face of the wearer onto a building while he or she spoke. Wodiczko chose the spherical facade of the La Bola IMAX theater in Tijuana as the medium for a symbolic purpose. As women factory workers had their testimonies of struggle projected upon the building, a film glorifying the relationship between the United States and Mexico was being shown in the theater.

“It’s a blast of truth,” Wodiczko said. “There is still public space, at least, on paper. But the fact that there is such a thing called public space doesn’t mean that it is public. It is public in the moment when you actually try to say something that seems to be inappropriate to be saying in public, that belongs to some private world.”

Wodiczko has also done a number of projects with the the war veteran community, people whom he believes are alienated like immigrants within their own countries.

In 2008, he redesigned an army Humvee by replacing the projectile launcher mechanism on its back with a video projector and speaker set. The War Veterans’ Vehicle debuted in Denver just days before the Democratic National Convention was set to take place in the city.

The vehicle broadcasted interviews with veterans about their difficulties in society as their words flashed upon the side of a building. Warfare sounds, such as gunshots, could also be heard, in an attempt to communicate the realities of war to the public. Wodiczko has done similar projections with the War Veterans’ Vehicle in Liverpool and Warsaw.

Wodiczko was awarded the prestigious Hiroshima Art Prize in 1998, an award given every three years that recognizes an artist who promotes global peace through his or her work. He has developed a proposed plan to build the World Institute for the Abolition of War in Paris, which is outlined in his book, The Abolition of War, in order to analyze and discuss the issue of war and hopefully avert war altogether.

“It will work on various levels theologically, culturally, artistically, politically, and technologically to analyze and discuss the issue of war and peace, and also to open up channels of possible engagement that will lead to the averting of wars,” Wodiczko said.