Home » Field Hockey Bounced in First Round of NCAA Tournament 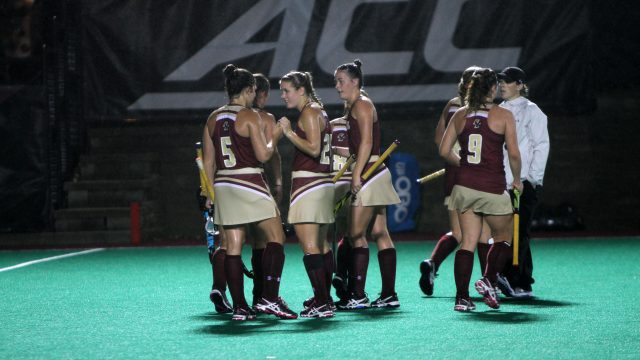 Field Hockey Bounced in First Round of NCAA Tournament

Following a loss in the quarterfinals of the ACC Tournament against No. 7 Virginia, No. 11 Boston College field hockey received a berth to the NCAA Tournament with a first-round matchup against No. 6 Connecticut. It was a rematch of the regular-season finale that saw the Huskies down the Eagles 4-3 in overtime to spoil BC’s senior day. With an opportunity to make a run in the tournament and avenge its prior defeat, the Eagles looked to send the Huskies home early with a first-round exit.

BC (10-10, 3-3 Atlantic Coast) got off to a rough start. Connecticut (21-1, 7-0 American Athletic) broke the scoreless tie early as Amanda Collins poked a feed from Antonia Tiedtke past goaltender Audra Hampsch, giving the Huskies a 1-0 lead just 10 minutes into the game. While the Connecticut attack calmed briefly, the Eagles struggled to establish any sort of offensive attack that would remain nonexistent for most, if not all, of the game. The Huskies broke through again at 27:31 with a goal by Amelia Iacobucci, making it a 2-0 game. The Huskies continued to pin BC back in its own end, and they outshot the Eagles 9-3 as Connecticut carried a two-goal lead into the locker room at halftime.

The second half wasn’t any better for BC, as Connecticut continued to apply pressure and construct offensive attacks. The Eagles stifled many of the Huskies’ shots on goal, which resulted in a lopsided 15-1 Connecticut edge at the start of the second half. At the 59:29 mark, however, the Huskies didn’t just cash in—they exploded. Collins registered her second goal of the game and her 22nd of the season that increased the Huskies lead to 3-0. Three minutes later, Anna Middendorf converted off a broken corner—their fifth of the half—to make it 4-0. The final exclamation point came a minute later when Svea Boker hammered a hard shot by Hampsch to add on and make it 5-0. It was truly a dominating effort by Connecticut, as it outshot the Eagles 20-3 en route to a 5-0 win that ended BC’s season.

“I thought UConn brought energy both on defense and on the attack that we didn’t match,” head coach Kelly Doton said to BCEagles.com after the season-ending defeat. “We had a few goal-scoring opportunities and corners that we didn’t capitalize on. Audra played a fantastic game in goal and kept us in the match for the most part.”

The Eagles fall to 3-12 all-time in the NCAA Tournament, and they are now 0-5 in NCAA Tournament play against Connecticut, who has also ended BC’s season each of the last two seasons. Despite the large margin of defeat, senior goaltender Hampsch did all she could to keep the Eagles in the game with 10 saves. The senior class, as whole, will truly be one to remember, as it is the only field hockey class in program history to advance to the NCAA Tournament in each of its four seasons at BC.

“It’s unfortunate that our senior class’ last game had to be this one,” Doton told BCEagles.com. “But we thank them for everything they gave to the program over the past four years.”