Home » Not Your President? 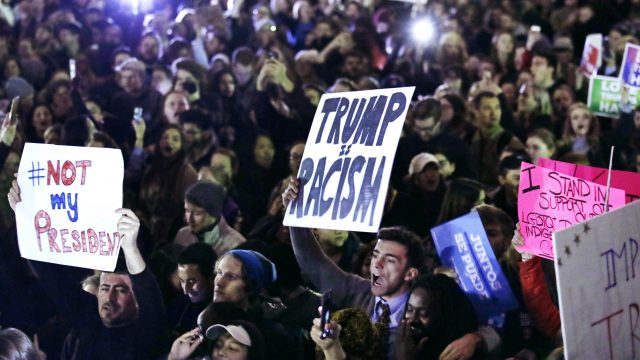 In the days since Donald J. Trump emerged as president-elect of the United States, protests have broken out in cities across the country. Thousands of people flocked to Boston Common on Wednesday night. The protesters held signs and shouted chants calling for impeachment and the abolition of the Electoral College. They champion the slogan “Not my president,” and yet, in just a few short months, Trump will assuredly be just that.

This is how our democracy works. I can understand the frustration that many have with the archaic Electoral College system, but I can still acknowledge that Trump was rightfully elected to the office under the system we have always had. If the protests were simply about the Electoral College, the questioning of a system where the winner of the popular vote loses? Well, I would probably support them. I believe that such an antiquated system needs reform as well. But these protests are about a man, a man who lost the popular vote by only a narrow margin but still legitimately won the presidency.

The truth is that I’m not pleased about his election either, but I also wouldn’t have been pleased with Hillary Clinton’s. Like Governor Charlie Baker, I refused to vote in the presidential election because I firmly believed neither candidate was a conscionable choice. I resolved to abide the outcome of the election whichever way it went, and in this way, some part of me understands the protestors’ frustrations.

But there are no consolation prizes or participation trophies in politics. Trump will be our president, and no amount of stomping through the streets will change that fact. The protest culture in our society has reached the frenzied point where people will now protest even unshakeable realities. One of the protesters I saw on the news held up a sign saying “Now we protest everything,” and I can’t imagine a more fitting motto for this era and this generation. It’s worth noting that these same protesters were among the people who called Trump petty and insolent for insinuating he might not concede if Clinton won the election. I have little doubt that if the situation were reversed, and Trump supporters were in the streets protesting Clinton’s rightful election, many of the people in the Common Wednesday night would have been calling them disrespectful threats to our great democracy.

Similarly, these protestors are some of the same people who parade around the theory that if only millennials voted, the country would be overwhelmingly blue. Unfortunately, that fact doesn’t matter now any more than it will in 30 years. Millennials didn’t vote in numbers that were meaningful for this election, and there is an argument to be made that the “blue” candidate bears some responsibility for not capturing our collective imagination. Will this upset election be the thing that causes my generation to sit up and take notice? This remains to be seen.

But I do know that there have always been elections when some were elated and others were not. It is, in fact, the very basis of our democracy. One person wins. One person loses. Throughout history, the thing that has endured is the orderly transition of power. In spite of our frustrations, we will have this again.

Clinton and President Barack Obama have shown tremendous grace and an amazing generosity of spirit in their reactions to the election. Their example should lead the way for all of us. Perhaps we need to stop denying and raging against the reality of our situation, and instead turn our focus toward doing the best we can with what we have. Anyone claiming Trump is not their president is drawing a clear line between themselves and a significant portion of Americans who voted for him. While they may not look like you, live near you, or think like you, they are your fellow Americans. Clinton said it best this week with the words, “We owe Donald Trump an open mind and a chance to lead.” And although I wasn’t on Tuesday, on this particular point, I’m with her.