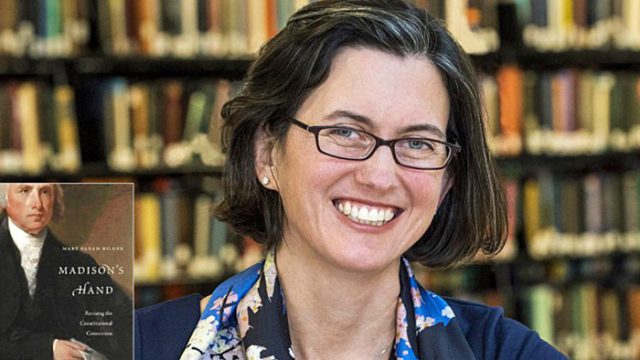 Boston College Law School has a new big name on campus. Mary Bilder was selected as a Top Woman of Law by Massachusetts Lawyers Weekly and was awarded for her work and research in the field of law on Oct. 27, along with five other BC Law alumni. The catalyst for this award was the publication of her most recent work, a nonfiction piece titled Madison’s Hand: Revising the Constitutional Convention, which has been lauded by The Washington Post and The Wall Street Journal. The book has received the Bancroft Prize and multiple other accolades.

The book, which offers a close reading and analysis of James Madison’s notes during the Constitutional Convention, tells the story of how this founding father contributed to writing the U.S. Constitution, yet also how Madison might not have been the man that everyone is familiar with.

“This is a really important text,” Bilder said. “Most people have read these notes about what [Madison] does at the convention, but I wanted to look deeper.”

The book is a culmination of about eight years of research, which included the reading of thousands of pages and multiple trips to the Library of Congress. At first, however, the idea for this book arose out of a desire to avoid research trips so that Bilder could stay at home with her two young daughters. But after all, as she describes, it didn’t work out like that.

The trips to the Library of Congress and years of research spawned from the need for more information and more detailed manuscripts, something that Bilder, a University of Wisconsin graduate in English, had not initially anticipated. Nevertheless, she insisted that this was a positive venture that was actually fun.

“The plan was that I was just going to stay in this office and read,” she said, acknowledging her desire to draw on her undergraduate reading skills. “But as I looked through earlier and earlier versions, that’s where the big puzzle opened up.”

As with any great work of history, however, the book has drawn criticism in conjunction with its praise. Especially in the highly political atmosphere currently present in America, Bilder’s work has been denounced by some for describing the Constitutional Convention as a ‘politicized event.’ In this sense, Bilder said, some people really liked the thesis behind the work. Others, on the other hand, wish to see the founding fathers as flawless heroes at the helm of a new nation, Madison in particular. Bilder argues that this was not the case.

“Do we want to think that those who wrote the Constitution are people, or are they heroes who have ideas that are fixed for all time?” Bilder asked. “We have to understand that they were people trying to fix problems, but that they saw the world differently and were not perfect.”

Bilder uses slavery as an example here. Although Madison was deeply involved in how American federalism arose, he was also essential to the protection of slavery in the Constitution.

“He was much more involved in these protections than a lot of people like to think, so some people are not so happy,” she said.

The founding fathers were also not best friends, which is an oft-held notion in the minds of many Americans. Madison’s personal notes exemplify this. Madison and Alexander Hamilton, another currently popular American historical figure, came to detest one another. Madison and Thomas Jefferson were also at odds for the entirety of the convention.

“This book reminds us that this convention was comprised of people working out both government and personal issues,” she said. “In that sense, both liberals and conservatives both like and dislike it.”

Praise and criticism notwithstanding, Bilder is passionate about the subject. For her, this was a work for which she drew both from her literary experience and her historical perspective, something that continues to give her satisfaction in her educational career.

In spite of this, she chose not to make her book 800-some-odd pages for the purposes of readability and brevity. She even said that she began to adopt Madison’s succinct writing style. Therefore, she said, be thankful if you are ever required to read this piece for a class.

“I worked really hard not to make it too long,” she said. “In part to keep it interesting, but also partly because I thought some poor undergrads would be forced to read it.”

Madison’s Hand, Bilder’s recognition in Massachusetts Lawyers Weekly and, in fact, Bilder herself, have come to represent BC’s mission in research.

She adopted this project as her own for eight years, which—although it is no marathon by academic standards—has been half of her own daughters’ lives. Thinking back on that, she reflected on the accomplishments of all women in law, which is a particularly important demographic to recognize following this year’s presidential election.

“This is meaningful because of all the women who have done all sorts of different things in Massachusetts,” she said. “After all—everybody’s doing the best they can, and that’s important.”

Photo Courtesy of BC Chronicle